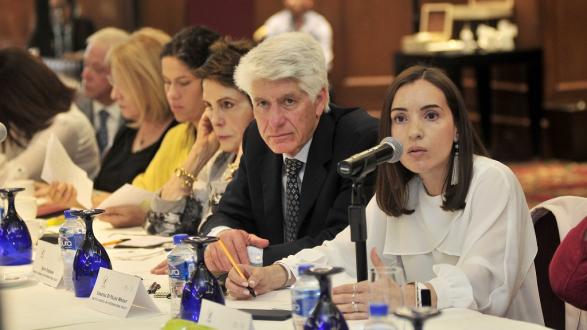 A non-partisan Pacific Council delegation composed of members from California, Utah, and Washington recently returned from a working visit to Mexico City, where the group sought to understand the state of current U.S.-Mexican relations in meetings with prominent Mexican leaders from a variety of sectors.

The visit, a key component of the Pacific Council’s Mexico Initiative, arose from collective concerns about sudden stresses that have been placed on the U.S.-Mexico relationship under the Trump administration. The U.S. bilateral relationship with Mexico is one that Washington "cannot afford to get wrong," delegates agreed.

Not Your Parents’ Mexico

During the course of a week, the Pacific Council group heard a great deal about the transformations currently underway in Mexico. Despite his current unpopularity, it was clear that the scandal-ridden president, Enrique Peña Nieto, had done a service for the country by building an unlikely political coalition to push through a challenging set of reforms—in energy, finance, education, and the business sector (breaking up monopolies)—and that those reforms have begun to take root during the last few years.

Delegates also took note of the ways in which Mexico and the United States have become inextricably connected over the past two decades, particularly since 2000, when Mexico embraced a democratic, multi-party political system. NAFTA, of course, played a key role in integrating the two countries.

The group’s interlocutors emphasized that today the U.S.-Mexico relationship transcends any single political administration in either country and contributes to growth in both nations. Border states in particular see great benefit from their ties to Mexico. For example in 2015, Texas exported over $92 billion worth of goods to Mexico, making the country its top export destination by far when over 1 million jobs in Texas are supported by exports. Mexico also figures as California’s top export market, supporting over 600,000 jobs here.

In the security realm, the United States and Mexico share more information on a daily basis than do the United States and the United Kingdom. Mexico imposes strict visa requirements on would-be visitors from countries that Washington identifies as "hostile" toward the United States, and these and other efforts help to promote U.S. homeland and border security. Just during the week that the delegation was in Mexico City, Mexican authorities working in close collaboration with U.S. Immigration and Customs Enforcement (ICE) found and detained three Yemeni terrorist suspects.

Likewise, Washington now recognizes the responsibility it wields in its neighbor’s security. As recently as May 2017, U.S. Secretary of State Rex Tillerson—echoing statements made by his predecessors—stated that the United States is responsible for the drug demand that fuels violence in Mexico: "We as Americans must confront that we are the market. There is no other market for these activities. It is all coming here. But for us, Mexico wouldn't have the trans-criminal organized crime problem and the violence that they're suffering," Tillerson said. "We really have to own up to that."

Drug violence is not the only challenge facing Mexico. Impunity and corruption came up in many of the week’s discussions. The difference from two decades ago, speakers noted, is that "everyone hears about it now," and many politicians are being held accountable: social media and the rise of civil society are having a positive impact in the fight against corruption.

Yet because of violence against journalists—who are the ones at the front lines of corruption reporting—the silver lining fades. Seven journalists were killed in March 2017 alone; at least 104 journalists have been murdered in Mexico since 2000, and 25 others have disappeared. 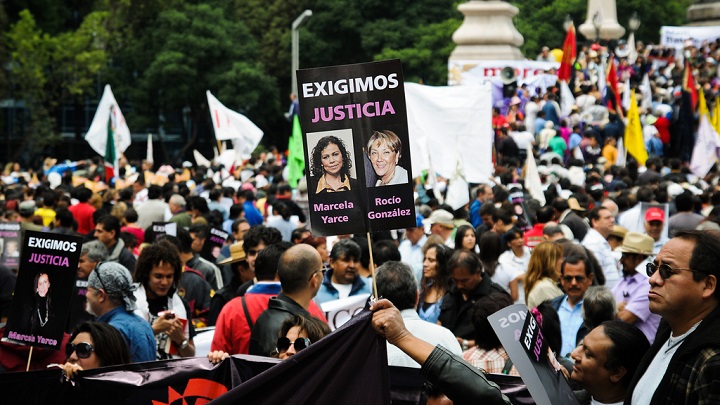 And there are other challenges as well. Forty-five percent of Mexico’s population lives in poverty. Sixty percent of its jobs are in the informal economy. The quality of education is low and still controlled in some cases by corrupt unions, despite the educational reforms passed by the Peña Nieto government.

Allegations of corruption have plagued the administration of President Peña Nieto, who has not been able to fulfill campaign promises of transparency, accountability, and lowering the country’s rate of violence. As a consequence, his approval rating has dropped in recent times to as low as single digits. Still, interlocutors suggested to the delegation that if the Mexican president can convince the public this year that he can deal with the United States effectively and secure a win-win renegotiation of NAFTA, this might give the currently flagging Institutional Revolutionary Party (PRI) a boost.

Under NAFTA, Jointly Producing (Not Trading)

The future of NAFTA was at the top of everyone’s minds in the delegation’s meetings. Speakers from government, business, and civil society all told delegates the same thing: both Mexico and the United States have an enormous amount to lose if the United States walks away from NAFTA.

The automobile industry is fully integrated, meaning the cars produced in this region are not U.S. cars or Mexican cars, but North American cars. By the time a finished car is sold, its components will have crossed the U.S.-Mexico border roughly six times. 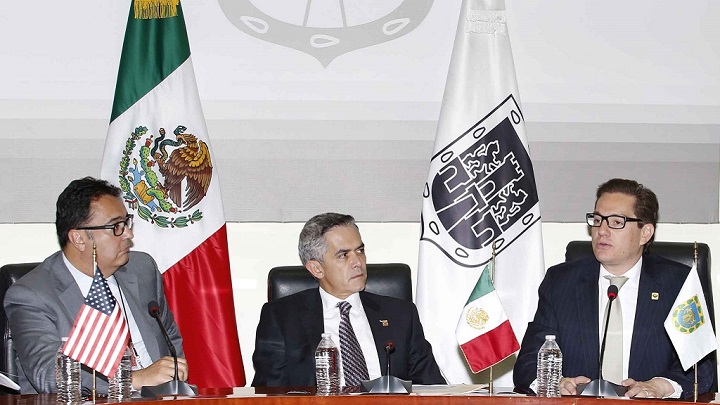 Mexico’s recent energy sector reform presents a new opportunity for collaboration. Energy Secretary Coldwell called the reform a "silent revolution," saying: "We have done in three years what other countries did over decades." As part of the reform, which is enshrined in a series of constitutional amendments, Mexico has moved from a fully state-controlled oil and gas sector to a model where the state company PEMEX coexists with a robust private sector, with 48 companies and 14 countries currently investing.

One interlocutor told the group, "We do not accept the premise that NAFTA has only been beneficial for Mexico, at the expense of Americans." Mexico and trade, more than one speaker noted, have been the piñatas of U.S. political discourse, taking the blame for (among other things) the loss of manufacturing jobs in the United States. Yet data shows that 87 percent of economic dislocation in the United States is from automation and innovation; only 13 percent is from trade.

In fact, another speaker told the group, the manufacturing jobs that do remain in the United States have Mexico to thank, as they are part of joint supply chains.

Perhaps the biggest wild card for Mexico right now is not the country’s own president, nor their challenging slate of reforms: it is the president across the northern border.

Many Mexican officials told the group that they were surprised when Donald J. Trump entered the U.S. presidential race as anti-NAFTA; Mexicans considered NAFTA "untouchable." They were also surprised to become a negative centerpiece of the campaign.

Delegates heard uniform feedback that the negative rhetoric during the campaign and the actions taken by the Trump administration since inauguration have damaged the U.S.-Mexico relationship. One interlocutor told the group that in his opinion, "In 120 days, Trump destroyed 25 years of relationship-building."

U.S. politics since November 2016 have also damaged the Mexican economy: Carrier and other U.S. companies canceled plans to invest and build plants in Mexico, and the peso fell by 12 percent between November 8, 2016, and March 2017, making it the second worst-performing currency in the world during that period. 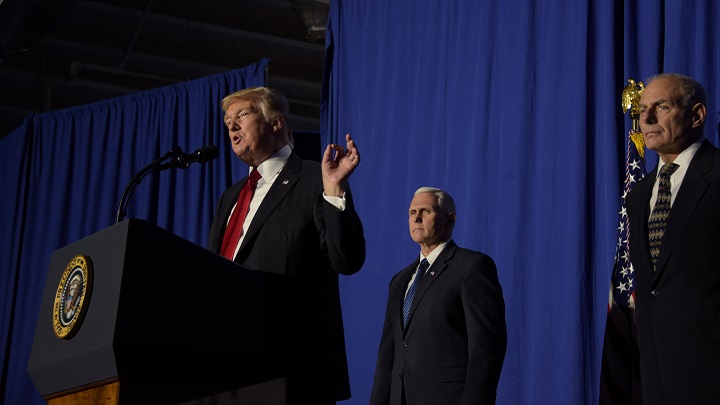 And yet, many of the Mexican leaders and analysts with whom the delegation met remained optimistic that the renegotiation of NAFTA could be mutually beneficial.

After all, many experts agree that the treaty could stand to be modernized. NAFTA was negotiated in the early nineties, when the internet was still nascent, so the agreement did not take into account the digital market. It also excluded the then-state-owned energy sector in Mexico, now open.

But Mexican negotiators are firm on a few ground rules:

Will the timing and pace of negotiations affect Mexico’s 2018 presidential race? According to the group’s interlocutors, the rhetoric is already having an effect. Leftist presidential candidate Andrés Manuel Lopez Obrador’s popularity has surged in the wake of Trump’s election, largely based on his anti-American rhetoric. Beatriz Leycegui, the former Mexican Under Secretary of Economy, told the Pacific Council delegation: "U.S. officials are becoming increasingly aware that postponing the NAFTA negotiations until other domestic priorities are addressed or adopting aggressive stances against Mexico raises the possibility of having a leftist, populist, and anti-American president in power in Mexico by the end of 2018."

How to do it? The first step will be sharing information about the contemporary reality in Mexico, and raising West Coast voices to change the national dialogue. Over the last year, the Pacific Council has begun to expand programming, strengthen outreach and recruitment efforts, and produce analysis and commentary to inform public discourse regarding the U.S.-Mexico bilateral relationship. The Council aims to create a strong and visible program with the potential to grow over time. 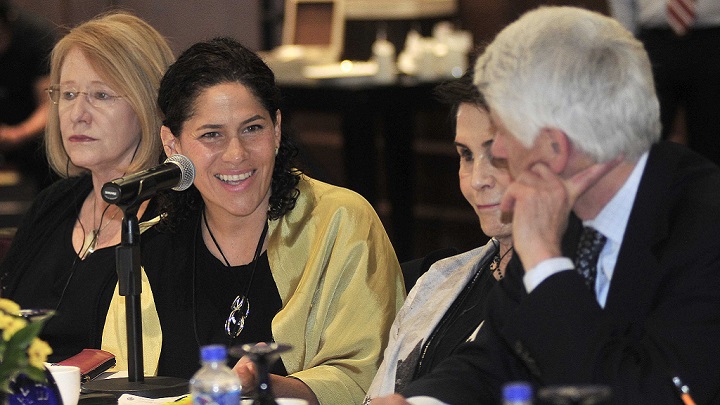 The United States and Mexico enjoy one of the most interdependent, successful economic partnerships in the world, and their populations share deep cultural, linguistic, and often familial ties. As part of North America, the two countries also share common domestic and foreign policy priorities as they relate to energy security, the environment, and public health, as well as other interests in the Western Hemisphere and around the world. As Dr. Jerrold D. Green, President and CEO of the Pacific Council, told the group: "The relationship between the United States and Mexico is too important and too precious to jeopardize with casual comments."

Check out photos from this delegation on our Flickr page.

Read more about the Mexico Initiative.