More at Stake in French Election than Future of France 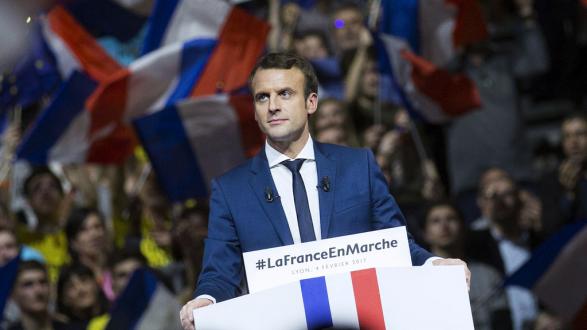 Kamdar is a Paris-based member of the New York Times’ Editorial Board. Le Corre is a Visiting Fellow of Foreign Policy at the Brookings Institution’s Center on the United States and Europe.

On May 7, voters in France will decide on their next president between Emmanuel Macron, leader of the “En Marche!” party, and Marine Le Pen, former leader of the National Front.

"There is more at stake in this incredibly important election than the future of France and the European Union. Western democracy—and maybe even democracy itself—is at stake," said Kamdar. "Voters have an incredibly stark choice before them. The candidates could not be more different."

"If Marine Le Pen is elected, all hell is going to break loose."

"If Marine Le Pen is elected, all hell is going to break loose," Kamdar said. "She has promised to hold a ‘Frexit’ referendum shortly after winning to pull France out of the EU, and she also wants to close France’s borders. Her whole thing is that France and Europe are being overrun by immigrants and French civilization is at stake. She would also take France out of NATO."

Kamdar said many in the United States are attempting to understand the French election by viewing it through the lens of the 2016 U.S. presidential election, with Le Pen as Donald Trump and Macron as Hillary Clinton.

"It’s a mistake to take that analogy of what happened in the U.S. election and apply that template to the French election," she said. "It’s a very different situation and the French presidential election process is very different. There is no Electoral College in France. The polls in 2016 showed Clinton winning the popular vote, which she did. If the polls remain correct in France, Macron will win, because if he wins the popular vote, he wins. That’s it."

"There is no appetite for Frexit in France. A number of polls very clearly show a majority in favor of remaining in EU."

Kamdar said the presidential debate this week between Macron and Le Pen was divisive and lacking in civility.

"The debate was incredibly acrimonious," she said. "One gets the sense that Le Pen knows she’s probably not going to win this election. She made no effort to appear presidential and just did as much as she could to take down her opponent. Macron spent the early part of the debate sparring with her, but toward the end he pulled it together and presented himself in a way that French voters could imagine him being president."

Both Kamdar and Le Corre predicted that Macron will win the presidency on Sunday.

"This election is the clash of two cultures and ideas in France," said Le Corre. "If Le Pen wins and [Germany Chancellor Angela] Merkel’s opponent wins in September, we will be heading toward a different kind of Europe. Le Pen and her supporters want to restore an old France that is no longer with us because of globalization. There is no appetite for Frexit in France. A number of polls very clearly show a majority in favor of remaining in EU."

"It’s a mistake to take that analogy of what happened in the U.S. election and apply that template to the French election."

Kamdar and Le Corre agreed that whoever wins the presidency, they will then face a very divided and fractured electorate heading into the country’s legislative elections in June.

"There have been many people vowing to vote for him on May 7 and then join the opposition on May 8," Kamdar said. "He has a big challenge ahead of him if he is elected on Sunday in pulling the country together and recreating some kind of political center, because right now the center has fallen apart."

Le Corre pointed out that Russia has been financing Le Pen’s former party, the National Front.

"She is basically being received in the Kremlin almost as a head of state by Putin," he said. "On the other hand, Macron has been the subjected to attacks by not just hackers but also the Russian media."

Kamdar added that if Macron and Merkel win their respective elections, it will represent "a major pushback against Russian meddling" in western affairs.