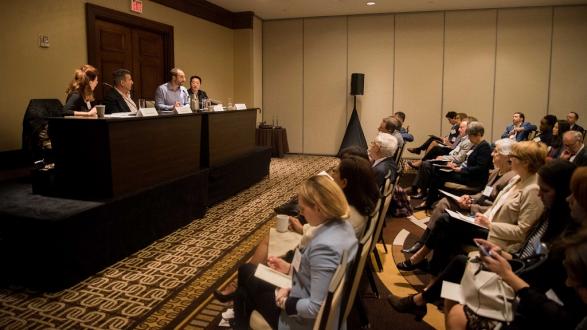 This year’s Global LA Summit spanned a full day of panel discussions and high-level keynote interviews on Los Angeles’ role as both a global city and national leader in various sectors and industries. Experts from the Los Angeles Consular Corps, the Mayor’s Office of International Affairs, the Washington Post, KCRW, LA Metro, Creative Artists Agency, and many others participated in our signature annual spring conference.

The conference’s sessions included discussions about Hollywood and soft power, disinformation technology, and extremism and terrorism.

Bridging the Digital Divide: The Relationship Between Tech & Society

The tech platforms meant to connect us have proven apt at achieving the opposite. Coordinated foreign social media campaigns have contributed to an air of distrust and divisiveness, while disinformation in the form of doctored audio and video has further muddled fact and fiction. The panelists noted these trends threaten not only liberal democratic governments around the globe, but the average news consumer as well. 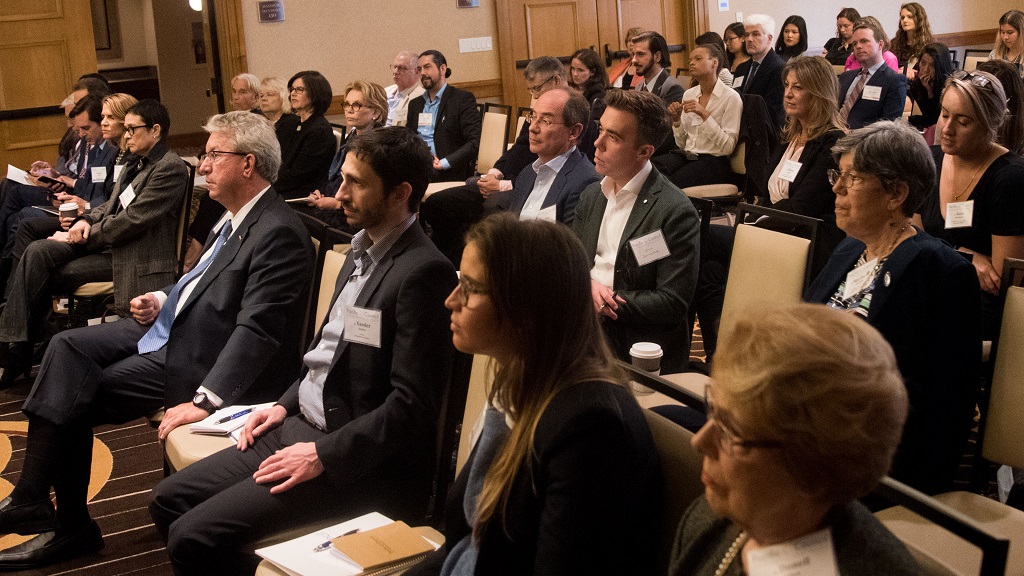 North highlighted how the relationship between Facebook and Cambridge Analytica was the wakeup call to looking at how digital platforms acquire, disseminate, and sell news.

“With news, what’s distressing to me as tech emerges is that not that long ago, we received news from primary news sources and then we found like-minded people to help us form opinions about the news. But now, it’s backwards: people receive opinions first. They don’t know the actual, factual, objective news,” said North.

Meel claimed there is more responsibility on the consumer when absorbing information on the internet and that activists need to double down on grassroots efforts and institutional level efforts to better educate citizens on biases and disinformation.

“Tech and politics have been seen as separate, but really they are very interconnected. Rarely do we think about innovating our democracy, but the 2016 election was an indicator that this needs to take place,” said Meel. 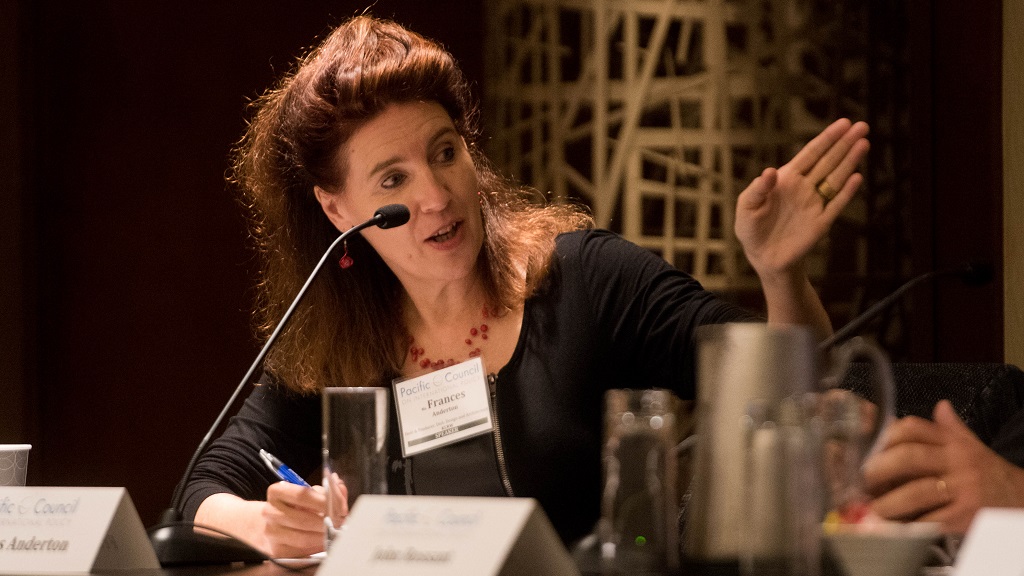 Like Meel, Otero saw technology can be used as a method for better facilitating political engagement. There is the opportunity to give people the tools and skills necessary to decipher “real news” from “junk news.” According to Otero, “we have more information than we are capable of processing, but this is not the first time humanity has faced challenges with new mass communication tools.”

As the global seat of tech and innovation, the U.S. West Coast wields both the responsibility and the power to solve the issues stemming from their platforms. All the panelists agreed that there is a lot that can be done to invest in education and evolve democracy to meet this “junk news” and digital divide challenge. However, doing so will not be easy.

Moderated by Alexandra Lieben, deputy director of the UCLA Burkle Center for International Relations, this panel featured Bonnie Abaunza, founder of The Abaunza Group, Chris Lawson, executive at Creative Artists Agency, and Zaib Shaikh, Consul General of Canada in Los Angeles and former film commissioner and director of Entertainment Industries for the city of Toronto.

Film worldwide has a long tradition of shaping popular imagination in countries around the world, for better or for worse. The soft power wielded by film and television has long been understood by governments, activists, and artists alike. Hollywood, with unparalleled resources and talent, is often highlighted as the world’s entertainment leader. Given the vast potential of film and TV to raise awareness, influence behavior, and shape norms, the panelists discussed Hollywood’s role in the global context. 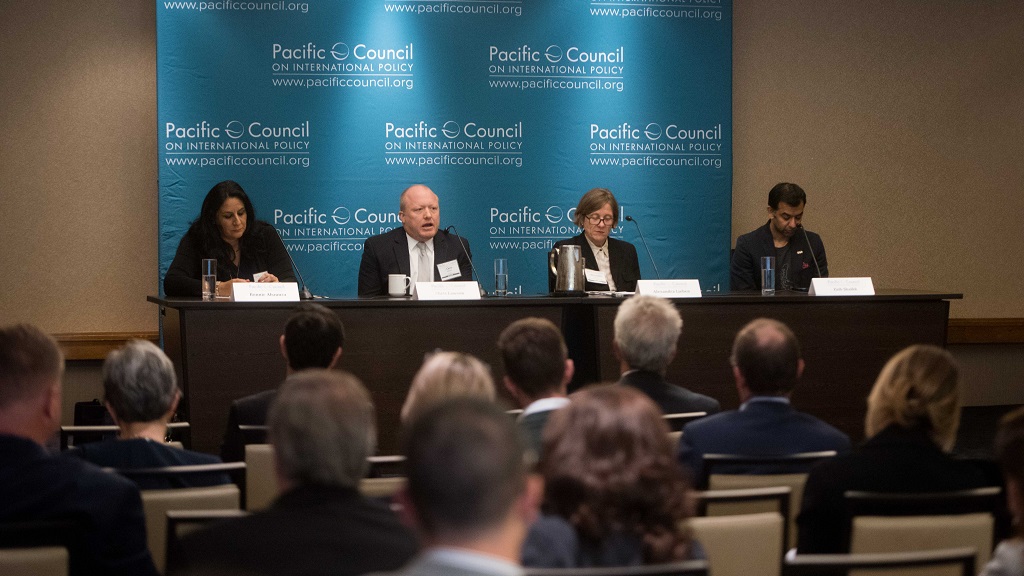 Not only does Hollywood have to worry about propaganda content, but it has also seen recent seismic shifts affecting the entire industry. Lawson noted that technological evolution in the last 10 years, changes in how audiences digest information, and a growing international expectation of Hollywood have all contributed to the industry having to recreate its financial model.

“Hollywood has been so immersed in how to sustain itself that sometimes it is easy to forget its responsibilities around the world and how it is perceived around the world. Hollywood needs to decide whether or not to share the right message,” said Lawson.

Abaunza reiterated Lawson’s sentiment that audiences have more power than ever before because of technology and new platforms. She talked about her role in creating the conflict-free diamonds campaign that resulted from the 2006 film Blood Diamond. Abaunza used this film to create consciousness in moviegoers’ minds and amplify a human rights campaign via awareness, advocacy, and action. 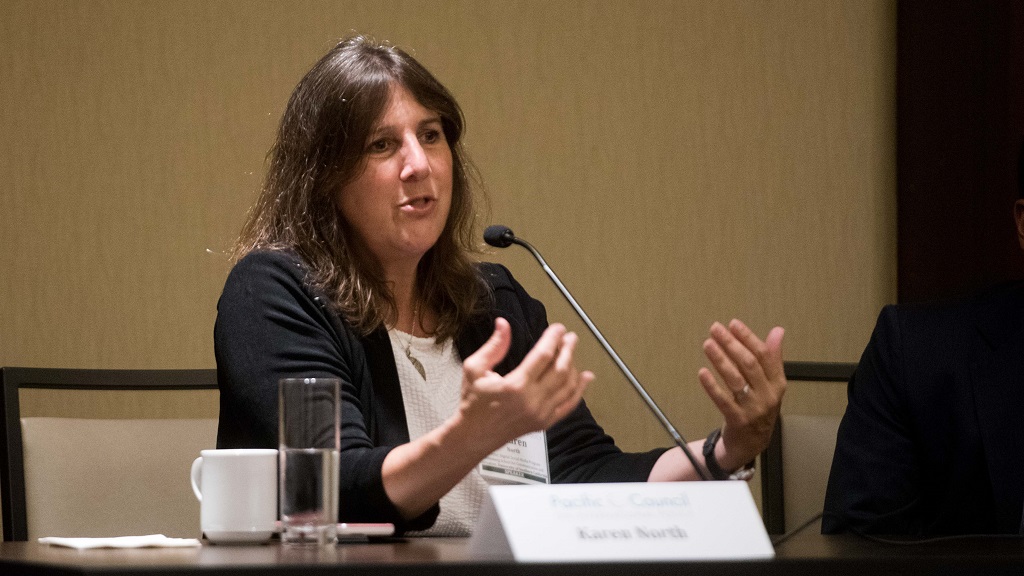 “’Blood diamond’ became part of the vernacular, [instigating a] wave of consciousness and breaching popular culture. It was a hugely successful campaign and people to this day ask where their diamonds come from,” said Abaunza.

Shaikh, a former actor turned diplomat, discussed social and political impact in content making. According to Shaikh, film and television in Canada largely aim to celebrate the country’s diversity and share that vibrant diversity with the world. Furthermore, he said it is not simply about making a movie, TV show, or web series, but rather that such content creation and sharing is itself a policy statement. 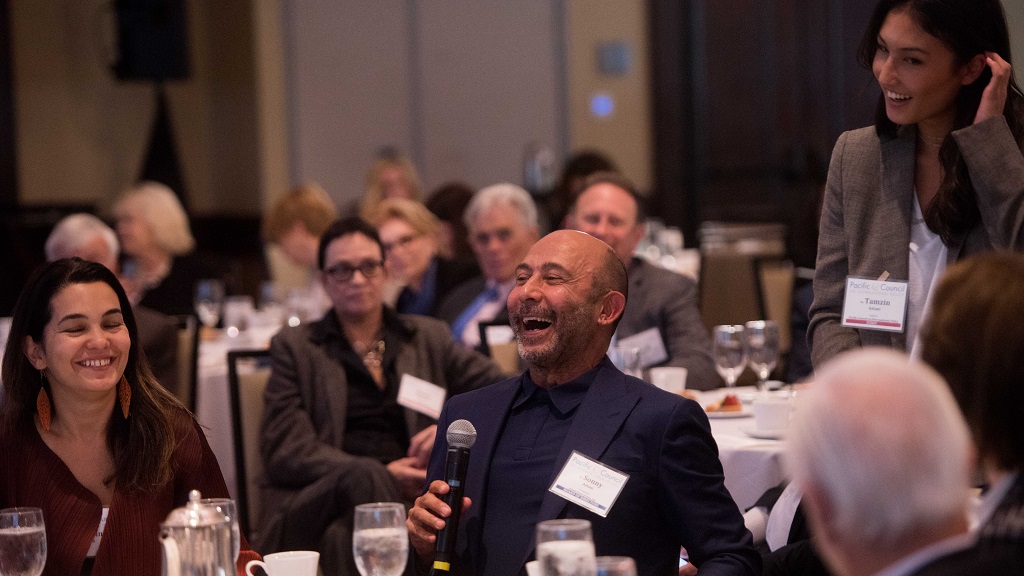 All the panelists agreed it is important to be conscious consumers of film and television. Both Hollywood and its audience must pay attention to what they see and what they are confronting because entertainment can have a lot of powerful, strong messages that shape not only domestic and international minds, but policy as well.

Behind the Lines of Extremism: Culture, Politics, and History

The final panel of the day was a keynote discussion with the Washington Post’s Souad Mekhennet on her book, I Was Told to Come Alone, which our members read as part of the Pacific Council’s Virtual Book Club. Joining Souad as she recounted her experience journeying behind the lines to cover culture, religious extremism, and the political reality of the Arab Spring was Erroll Southers, director of Homegrown Violent Extremism Studies in the Sol Price School of Public Policy at the University of Southern California.