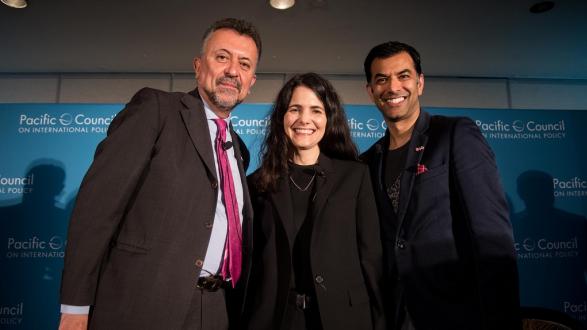 The three diplomats discussed the important economic and cultural role Los Angeles plays globally, specifically as it relates to Mexico and Canada.

According to García, Mexico and Los Angeles have always had a special relationship and the city contributes to not only those of Mexican heritage, but to Angelenos across the board. “Los Angeles should keep developing and expanding their platforms of innovation and integration,” García emphasized.

With regards to Canada, the United States has about 265,000 jobs connected to U.S.-Canada trade, many of which are in LA. But trade is just one of the many influential aspects of the relationship between Canada and Los Angeles.

According to Shaikh, “The identity of North America has always been the three of us: Canada, the United States, and Mexico. About 90 percent of Canadians live close to the U.S. border. And now that I’m in LA, I get to share a culture with great Mexican heritage and proximity to Mexico.”

All agreed that the North American vision and identity can lead to a prosperous future, but alignment between the three countries is going to be key. A global Los Angeles is a strong place to start.