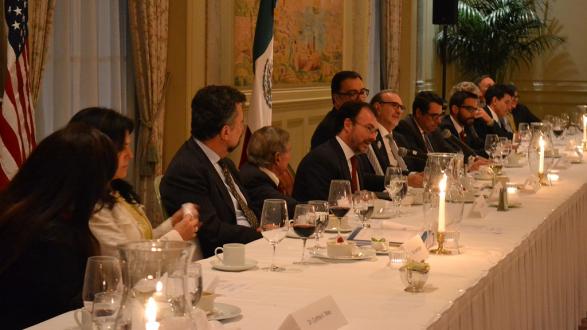 "The Secretary expressed his appreciation for the leadership California is showing in strengthening ties with Mexico and highlighted efforts like the Mexico Initiative as being critical to ensuring the long-term vitality of the relationship," said Camuñez.

Secretary Videgaray provided a Mexican perspective on U.S. politics, and noted that public opinion of the United States in Mexico has drastically changed in the last year due to rhetoric during the U.S. presidential election season and the Trump administration’s policies on immigration and a border wall. He cited recent opinion polls showing that young Mexicans in particular had a very positive view of the United States until recently. It took decades for that positivity to manifest itself, he said, leaving Mexicans to wonder why the United States would now risk upsetting a relationship with a long-time friend, partner, and neighbor when there are many other pressing issues around the world.

Secretary Videgaray also pointed out that Mexico was shocked and confused about the Trump administration’s recent decision to terminate the Obama-era law protecting the children of immigrants, known as Deferred Action on Childhood Arrivals (DACA). He said Mexico will receive those children if the United States sends them back because it would be an economic boon for Mexico, but that Mexico still does not understand why Americans would want to give up that human capital in the first place.

Secretary Videgaray, who previously served as Mexico’s Secretary of Finance and Public Credit, also gave a generally optimistic assessment of the ongoing NAFTA negotiations, noting that there are three broad areas of focus under consideration:

He mentioned that the entire trade deficit with Mexico would be erased if the auto industry was taken out of the calculation. He also spoke to positive developments and success stories in Mexico, such as the reform of its energy sector, as negotiating points for them in the NAFTA talks. Secretary Videgaray agreed that there are elements of NAFTA that could be improved but argued against terminating the trade deal entirely, which would have negative consequences for the economies of Mexico, Canada, and the United States.

The Pacific Council’s Mexico Initiative seeks to take an approach to Mexico that reflects our geography, identity, and appreciation for the international policy interests of the United States. Through the Initiative, the Pacific Council holds events, produces analysis and commentary, and fosters exchange with Mexican leaders. Learn more.