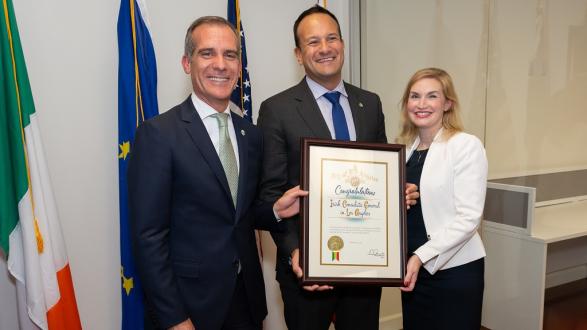 "LA has a global reputation for turning today’s ideas into tomorrow’s innovations. That’s one of the reasons we want to expand our presence in California."

Justin Chapman: Tell me about your background and how you came to be the new Irish consul general in Los Angeles.

Orla Keane: I have been in the Department of Foreign Affairs and Trade (DFA) of Ireland—which is the equivalent of the State Department—for over 17 years, so I’m a career diplomat. I’ve done lots of different jobs over the years including previous foreign postings at our office to the United Nations in Geneva, Switzerland, and my last posting was at our Permanent Representation to the European Union in Brussels, Belgium. I’ve done quite a bit of multilateral work.

"There’s a lot going on in Los Angeles, so this was an obvious place for us to open a consulate. It makes sense for us to be here."

I was also the deputy director of our human rights unit for four years. I’ve worked on our development aid program. I was deputy director for southern Africa for a while. I’ve also worked on issues relating to Northern Ireland and the peace process on a number of occasions.

Tell me about your work in Africa.

Our overseas development aid program is focused on sub-Saharan Africa. By our standards, we have quite a large presence there. I was working on the southern Africa desk. I was lucky enough to visit all of the countries where we have programs there. We have an embassy in Pretoria, South Africa, which also covers Zimbabwe, in Lusaka, Zambia, in Maputo, Mozambique, in Lilongwe, Malawi. We also have a presence in Uganda, Tanzania, Ethiopia, Sierra Leone, and others.

What was your role at the EU-UK unit?

For the last two years before I came out to Los Angeles I was working on Brexit. I was on the relatively small team of diplomats in the DFA who were following pretty much everything to do with Brexit, such as the Article 50 negotiations.

That included working closely with [the EU’s chief Brexit negotiator] Michel Barnier and his team; liaising with colleagues around Europe on information that was coming in on the positions that different member states were taking; and working very closely with our colleagues in our embassy in London who were letting us know about the twists and turns and anticipating all of that, and with other colleagues who were working on Northern Ireland issues because that’s obviously a big priority for us in the Brexit negotiations. 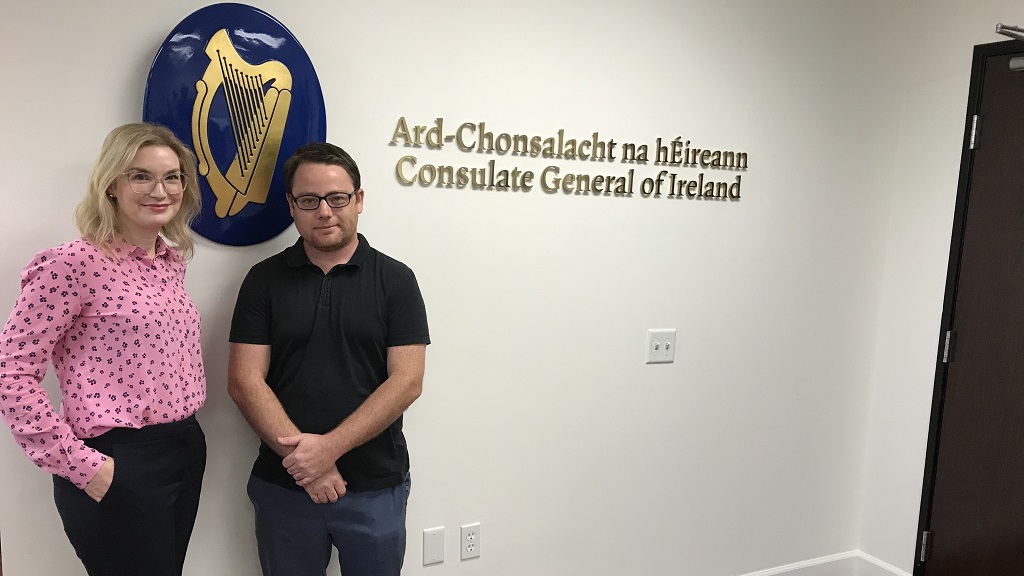 I thought I was coming over here and stepping away from Brexit but it’s kind of hard to get away from it. It’s been a really big priority for the government. Even though it’s not a project that we are supportive of or a project that we think is going to yield any positive results, unfortunately—the Irish government has always been very clear about that—it is nonetheless something that demands our attention. We’re in interesting times today.

Is Ireland worried about how Brexit is going to turn out?

Since about November of last year when the deal between Theresa May and the EU was agreed on, there’s been a lot of uncertainty. That’s probably been the biggest concern for all of us, because we have been and are still working towards a negotiated outcome which would give us an orderly UK withdrawal. That’s what Ireland wants to see, what the EU wants to see, and what the UK wants to see, but because of the composition of the UK Parliament at the moment, because of the strong feelings on every side of the argument, for and against, we’re seeing more and more uncertainty.

"The Irish government has a program called Global Ireland that aims to double our global footprint by 2025."

The EU has offered a three-month extension of the Article 50 process, and [a general election in the UK has been set for December 12]. Our position is that we support the most recent deal that was done between the EU and the UK and we would like to see that go through. There have been some positive signs from the UK Parliament about that, but still not over the line, so it looks like we’re going into another period of uncertainty.

Our biggest concern was a no-deal Brexit. That’s kind of the worst case scenario because it just puts everyone into very unprecedented uncertainty. At the moment, with the offer of the extension and with the UK Parliament having voted against no-deal, avoiding that scenario is looking a little bit more positive at the moment.

With the majority of Northern Ireland having voted to remain in the EU, do you think there will be a renewed push to reunify Ireland?

It’s certainly an issue that has moved again to the forefront. That discussion has definitely been accelerated by Brexit. It’s a very complex situation. It’s always been a very complex situation. I suppose it’s been made even more complex now by the fact that the majority of the people in Northern Ireland voted against Brexit. There isn’t good support in Northern Ireland for Brexit still, according to opinion polls and certainly from what we hear on the ground.

The uncertainty that the Brexit discussion causes combined with the fact that the Northern Ireland executive hasn’t been sitting for a protracted period, it has surfaced that united Ireland question again. We’re very conscious of that and the government is very conscious of being sensitive to how sensitive an issue that is in Northern Ireland, and also always looking down the line at what we can do to prepare that debate and discussion to anticipate when that question could be asked.

"The consulate in LA is Ireland’s seventh consulate in the United States. California accounts for about 15 percent of all the U.S. imports into Ireland. There are 2.5 million people in California who claim to have Irish descent."

So, yes, Brexit has accelerated that discussion and Brexit also raises questions about the union of states in the United Kingdom. That’s another reason that the discussion has been accelerated in Northern Ireland and on the island of Ireland as a whole.

Why did Ireland open a consulate in LA?

We first established a consulate in California in 1933, in San Francisco, so we’ve taken our time in looking at a second consulate in the state. But in fact, California’s the only state where we have a second consulate now, which is very much an indication of the importance of California to Ireland and particularly to the Irish economy and the links that we have here that go back a very long time. 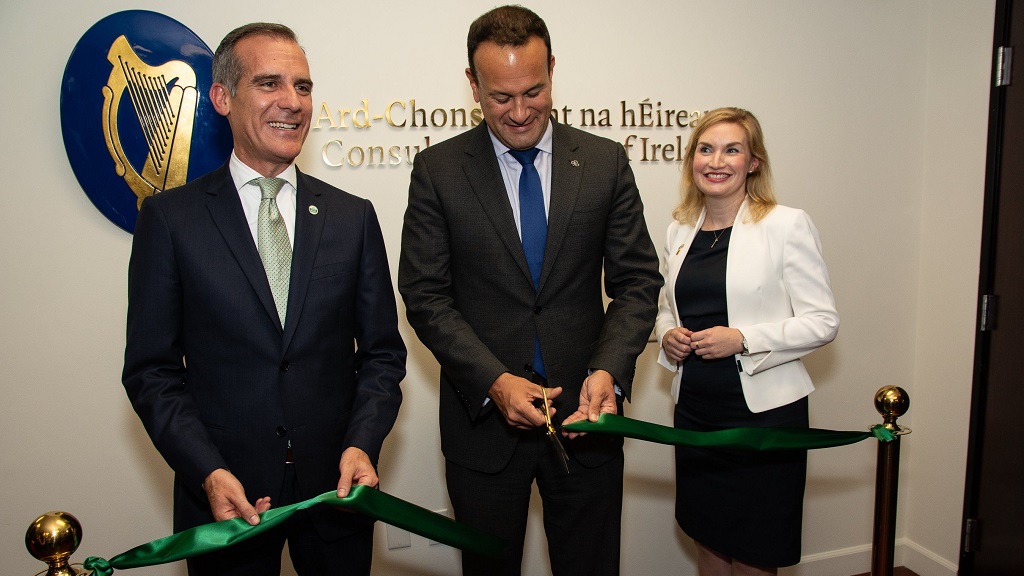 The United States is a really important trading partner for Ireland. California accounts for about 15 percent of all the U.S. imports into Ireland. One of the interesting things about trade between California and Ireland is that it’s very much two-ways. I read a recent report that the LA World Trade Center did about foreign direct investment in Southern California, and we’re the seventh largest investor into Southern California and Irish companies are employing just over 16,500 people in the region.

That’s the trade and investment piece. And then, obviously there’s our people. California has the largest number of people claiming to be of Irish descent than any other state in the United States. According to the last Census, there are 2.5 million people in California who claim to have Irish descent, which is about 8 percent of the overall population.

"Ireland Week [from November 1-8] is a really great showcase of Irish culture, from comedy to theater to literature and a lot in between, including an emphasis on technology and innovation and the nexus of business and culture."

There’s much more of an awareness at home about what’s happening on the West Coast. Certainly, when it comes to California, there’s so much innovation happening here. The technology that’s developed in California has implications around the world, particularly for us in Ireland. There are a number of really big California-based companies who have a very large presence in Ireland, including all of the main born-on-the-internet companies. European and Middle East headquarters of a lot of those big companies are usually in Dublin: Facebook, Google, and PayPal, for example.

There’s a lot going on, so Los Angeles was an obvious place for us to open a consulate. Certainly, since we’ve been here we can see that there’s so much potential. It makes sense for us to be here.

Does the new LA consulate offer consular services like passports? And do you also plan to conduct public diplomacy and cultural programs?

We’ve opened a slightly smaller office here for the first two years and we’re still in setup mode. We are keeping some of our major consular services such as passports and visas at the San Francisco consulate because a lot of infrastructure and people-hours go into that work. In LA, we’ll provide consular assistance such as emergency travel documents for people who have maybe lost their passport or those who need assistance due to circumstances that have arisen while they’re traveling or while they’re based here. Meanwhile, we’ve moved most of our passport renewals online, which is a game changer for us working in the consulates.

We also have a really big focus on culture. That’s linked to the emphasis we have on the creative sector, the screen and audio/visual industries in particular. It was actually announced during the Taoiseach’s visit in September that Screen Ireland, formerly known as the Irish Film Board, are going to be reestablishing their presence in LA. They’re going to place a person in LA next year who will be co-located with us here at the consulate. 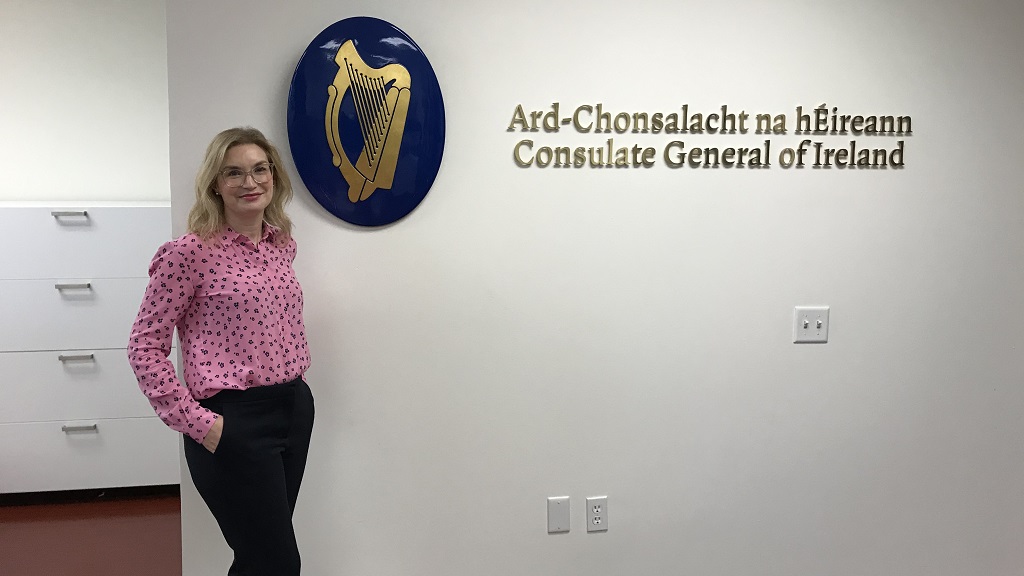 We also work on promoting Irish culture. We had a contemporary art center in Santa Monica this summer as a pilot project, which was fantastic. I’m working on a project this week with an amazing Irish dance company that has a production at UCLA on November 9. That’s all very much part of what we’ll continue to do. There is a lot of interest in Irish culture here in terms of visiting Irish artists, musicians, theater companies, dance companies.

What can we expect at this year's Ireland Week?

Ireland Week is taking place from November 1-8. This is the third year we’ve had Ireland Week in LA, the only city where it takes place. It’s quite an innovative idea. It’s independently organized, but we support it from the consulate. That’s been a really great showcase of Irish culture, from comedy to theater to literature and a lot in between, including an emphasis on technology and innovation and the nexus of business and culture.

The organizers of Ireland Week were looking at how much is going on here. There are a lot of younger, Irish-born people who are out here working for big tech companies and staying on after and setting up their own companies or working in startups. A lot of that technology is also linked to the creative industries as well. And there have always been Irish people working in the creative industries in Hollywood.

Learn more about the Irish consulate in LA and its services and programs by following @IrelandinLA on Twitter or visiting dfa.ie/losangeles. Learn more about Ireland Week at irelandweek.com.