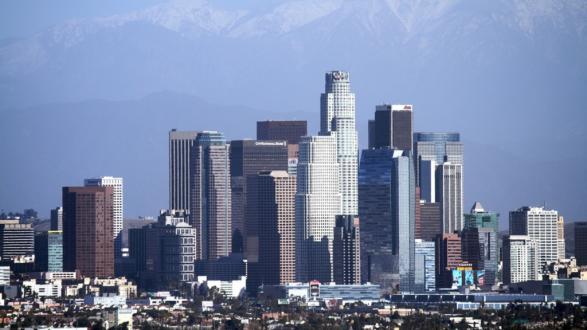 Pacific Council member and LA 2028 CEO Gene Sykes supervises all aspects of the Los Angeles' Olympic committee's business, operations, and activities. He successfully led LA's recent bid to host the Olympic Games for the first time since 1984. He also recently attended the Olympic Winter Games and Paralympic Winter Games in PyeongChang, South Korea, and shared some insights about his experience with the Pacific Council as Los Angeles looks to its own role as Olympic host city in 2028.

What was most memorable about your experience at the PyeongChang Games?

The win by the U.S. women’s hockey team in the gold medal match against Canada, and not just because the United States won gold. These two countries are obviously great friends and have faced each other in four out of the past five Olympic finals, and every time the Canadians came out on top. This time it went the other way for the first time since 1998.

I was sitting with Chris Overholt, the Canadian Olympic Committee CEO, along with my family and thousands of fans, and I really felt like he was (almost) as excited for the Americans to win the shootout as he would have been if the Canadians had won. As soon as that winning goal was scored, he immediately reached over and shook my hand. I felt a sense of real friendship, that we were just celebrating an incredibly intense, great game of hockey. That was a really memorable moment and, to me, the experience that best represented the Olympic spirit.

I also attended the Paralympic Games, and the highlight for me was awarding the medals for men’s sitting cross-country sprint. American athletes won the gold and bronze medals, both of them veterans who are double amputees after injuries in Afghanistan. While all of the Olympic and Paralympic athletes are remarkable achievers, the heroism and courage of these athletes is truly impressive. The experience reinforced for me what a tremendous opportunity it will be for us to plan and organize the Paralympic Games in LA in 2028.

What did you learn in PyeongChang that you will apply to the LA2028 preparations?

The PyeongChang organizers did an outstanding job of focusing on presentation in each of the venues so that every spectator had a great seat, was treated well, and could enjoy what was being done on the field of play. They have every reason to be proud of the outstanding Games they hosted, and we look forward to debriefing with the organizing committee in the months ahead to learn from them.

Did the PyeongChang Olympics have a positive effect on diplomatic relations on the Korean Peninsula?

It certainly didn't hurt them. A number of North Koreans, who have never in their lives been to South Korea, traveled with the approval of their government, which has never happened before. Not only did they march together in the Opening Ceremony, but they actually competed together with South Korean athletes on their Olympic women’s hockey team, they competed individually in some events, and everywhere the North Korean athletes competed you could see the North Korean cheerleaders. It was at the very least an opening of a dialogue, and I think people felt good that sport seemed to create a foundation that.

Were attendees at the Olympics interested in current politics on the Korean Peninsula?

Most of the attendees were South Koreans, and roughly 10 percent of attendees were from other countries. I think the South Koreans were there primarily for the sports and the celebration, and all the rest of us were there because it was the Olympics. I think we were curious about the politics and pleased that the Olympics seemed to be a venue for peaceful co-existence and connection between the two Koreas.

Did you have any insight to the experience between the athletes from North and South Korea?

It was a little otherworldly for people who have never had exposure to North Korea to see things like the choreographed cheerleading, but the fact that North Koreans were actually safe and peaceful and in the midst of this big international event in South Korea was extremely positive. I can’t say whether it was a genuine rapprochement, but the spirit was certainly positive.

It was the first time I have seen ski jumping live, and I am incredibly impressed by the courage of those ski jumpers. It is absolutely phenomenal to see what these athletes can do, and how high the ski jump is when they start.

Every Games are different – but what remains true about every edition of the Games is that the quality of the athletic events was very high. And the fans were exuberant and enthusiastic – positive about their own athletes but respectful, kind, and gracious to athletes, participants, and fans from everywhere else. I know Angelenos will welcome visitors with the same hospitality in 2028.

Gene Sykes is a Pacific Council member, CEO of LA2028, and managing director and co-chair of Global Mergers & Acquisitions at Goldman Sachs & Co.