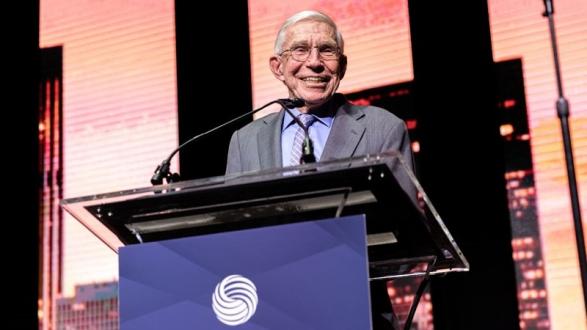 On January 30, Ambassador Frank Baxter was awarded the Civic Medal Honor from the Los Angeles Area Chamber of Commerce at their Inaugural Dinner, the annual kick-off for the Chamber’s regional work.

Ambassador Baxter is a long-time Pacific Council Director and a member of the Christopher Society, a group of the Council’s most dedicated supporters and leaders. The Civic Medal of Honor reflects Ambassador Baxter’s far-reaching generosity toward causes throughout the city of Los Angeles.

“Once he commits to something he is fully in,” said Dan Katzir, CEO of the Alliance for College-Ready Public Schools (the Alliance), in a video tribute to Ambassador Baxter during the dinner. Ambassador Baxter is the Founding Chairman of the Board of the Alliance. “He uses his charm and network and beautiful brain and sense of compassion to help who he’s committed to helping.”

In a conversation with Pacific Council staff, Ambassador Baxter shared that his “overwhelming interest is education,” and has supported many educational programs across the city as proof of his passion and dedication to the cause. He is credited for growing the Alliance from an idea at one school to 28 schools serving 13,000 low-income scholars across Los Angeles.

"The Pacific Council can educate and influence how our international affairs are conducted. Citizens need a better sense of how our country is connected to the world."

When asked what drives and motivates him, Ambassador Baxter replied, “Democracy is not a spectator sport. Citizens need to take responsibility for the improvement of society.” Through his leadership role at the Pacific Council and former government positions, he has committed time, energy, and much of his career to promoting democratic principles in the world. He is the former Ambassador to Uruguay where he served from November 2006 to January 2009 under President George W. Bush and the current Honorary Consul of the Oriental Republic of Uruguay in the city of Sacramento.

“The Pacific Council can educate and influence how our international affairs are conducted,” he said. “Angelenos generally do not realize what a global city LA is. The Council can make a difference by bringing people up to date about international institutions like the airport and the Port. Going into schools and increasing awareness of international affairs is vital. Citizens need a better sense of how our country is connected to the world. Citizens’ participation in international relations is very important.”

“I am happy to support the Council financially as well as with my time,” he said. “The Council’s new strategy work feels very good. It’s a vital mission for making our world a better place.”