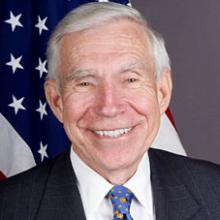 Ambassador Frank E. Baxter is Chairman Emeritus of Jefferies and Company, Inc., a global investment bank focusing on mid-cap companies, and serves on the Pacific Council on International Policy’s Board of Directors. He is the former Ambassador to the Oriental Republic of Uruguay, where he served from November 2006 to January 2009. Ambassador Baxter is Chairman of the Board of Alliance for College-Ready Public Schools, a charter management organization with twenty-eight middle and high schools; Chairman of the Board of Fremont College, a career college; Board member of the University of California Berkeley Foundation.  He is a board member of EDVOICE, an educational advocacy group in Sacramento; Los Angeles County Museum of Art; Los Angeles Opera; Music Center Foundation; and St. John’s Health Center Foundation. He is a Trustee of I Have a Dream Foundation, LA Chapter. He has also been involved in numerous civic activities, including the following: former Chairman of After-School All Stars; Board member of the California Institute of the Arts; President of the Board of the Los Angeles Opera; former director of the NASD and served as Chairman of the Committee, which resulted in the spin-off of NASDAQ. He subsequently served on the Board of NASDAQ as a member of the Executive Committee and Chairman of the CEO search committee. Ambassador Baxter is also a former director of the Securities Industry Association. He is the recipient of the Bet Tzedek, House of Justice award and the City of Angels award. He graduated from the University of California at Berkeley with a Bachelor of Arts degree in economics.