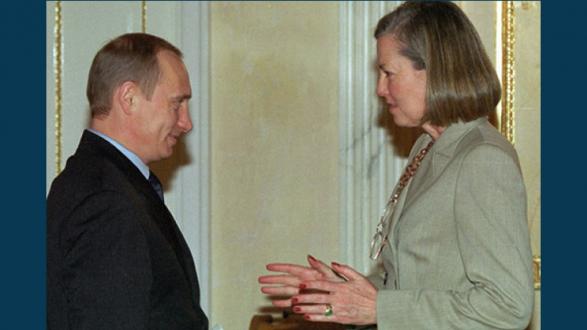 Karen Elliott House is currently Senior Fellow at the Belfer Center for Science and International Affairs at Harvard Kennedy School. In 1995, she was asked by Pacific Council Founding President Abe Lowenthal to join the Council’s new Board of Directors, given her significant international experience as a journalist and editor for the Wall Street Journal. She served on the Pacific Council Board for six years, mostly from the East Coast, where she went on to become publisher of the Wall Street Journal and senior Vice President of Dow Jones & Company.

Ms. House’s journalism awards include a Pulitzer Prize for international reporting for coverage of the Middle East (1984), two Overseas Press Club awards for coverage of the Middle East and of Islam and the Edwin M. Hood award for Excellence in Diplomatic Reporting for a series on Saudi Arabia (1982). She is author of On Saudi Arabia: Its People, Past, Religion, Fault Lines—and Future, published in September 2012.

Karen House: Abe Lowenthal is what I remember best. He is one of the world’s most engaging characters. I was on the board of Council on Foreign Relations (CFR) when the Pacific Council started. He asked me to join. It was in the beginning days and I was running international at the Wall Street Journal and spending an enormous amount of time covering Korea, which Pacific Council did study groups and work around—and Japan and China.

There were also the annual retreats (Members Weekend). I went to a few of those in the early days when I was on the Board. I always valued the opportunity to be face-to-face and listen to and talk to experts—as a journalist—and the whole concept of having the Pacific Council bring together experts and also journalists and lawyers who had an interest and involvement with international affairs who weren’t diplomatic practitioners was a great idea. I am happy to hear that it keeps evolving.

The whole concept of having the Pacific Council bring together experts and also journalists and lawyers who had an interest and involvement with international affairs who weren’t diplomatic practitioners was a great idea.

Abe Lowenthal was a big highlight of the Pacific Council. He was the spark plug for it all. He did a really good job getting things started and connecting people across many subjects. He was an effective internationalist.

I specifically recall Bob Hormats, who was an economist on the National Security Council (in the 1970s). He was very active and used to come to the retreats. He was an expert on economics in Asia, and he could explain international economics in English to reporters—he was always a very effective speaker.

What do you think about the Council’s new strategy to engage more people in Los Angeles around global engagement?

It’s a very worthy goal. Now, when everyone in the country seems so divided on everything, linking east and west and experts and non-practitioners—it was unprecedented at the time (in 1995) and even more important now.

Do you have any reflections as a woman who pioneered your leadership in foreign reporting?

It’s changed a lot since then. When I was the Journal’s diplomatic correspondent. I was the only woman on the plane with the Secretary of State, usually 12 men and me. So now you have a lot more women. I am on a foundation board now where I was shocked to see I am still the only woman, it almost never happens anymore but it was a constant 30 years ago. That’s a good trend that women are no longer the outliers. Thirty years ago at CFR you had almost entirely male speakers and that is certainly no longer true.

I was always fixated on getting whoever I wanted to talk to me about whatever topic was on my mind. I never let being female get in the way of reaching single-minded people. It is nice that these days there are many more women in the field, whether it’s ambassadors, journalists in foreign policy, or presidents and prime ministers in other countries. We still haven’t had a female president but a lot of other countries have.