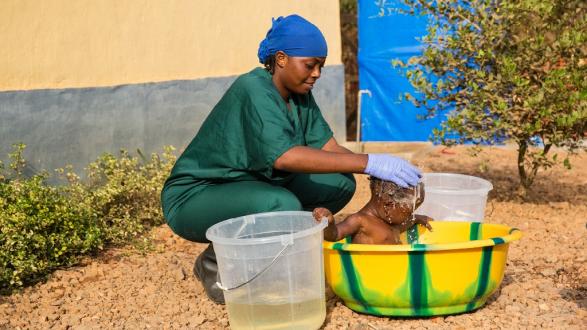 The recent Ebola outbreak in the Democratic Republic of Congo (DRC) has officials concerned about its potential to spread. The outbreak started on May 8 and has already killed 27 people, according to the World Health Organization (WHO). News of a new outbreak is disconcerting, especially after the last widespread outbreak in 2014, which was the deadliest occurrence of Ebola since the virus was discovered over 40 years ago, in which over 11,000 people died.

This recent occurrence of the disease is worrisome as the virus has just spread to Mbandaka, an urban city with over 1 million residents, and a frequent transportation hub. This raises the chances of the virus spreading as more people are now at risk of coming in contact with those who are infected.

Luckily, there are newer strategies to help fight the outbreak that weren’t available previously, like isolation centers and more treatment facilities, in addition to vaccines and the support of organizations like Doctors Without Borders and the Red Cross.

NGOs and other non-profits working in global health must work with local government officials to produce and disseminate information on the disease.

But in addition to reactionary measures, what else can we do to prevent future outbreaks of the deadly disease? How can public diplomacy play a role?

A major factor in the spread of Ebola is lack of awareness. Recently, two Ebola patients left the hospital where they were being treated, potentially exposing dozens of people to the disease. It is clear locals are still unaware of the severity of the disease and how it can spread. NGOs and other non-profits working in global health must work with local government officials to produce and disseminate information on the disease. The Red Cross and Doctors Without Borders are working hard to create information campaigns to share facts about the disease.

Governments can play a role in awareness, as well. The State Department recently allocated $5 million in response to the crisis to support the WHO’s work. This also provides an opportunity for U.S. public diplomats at the embassy to assist the WHO and other organizations on information campaigns.

There are some strong examples of active campaigns toward the fight against Ebola. The International Federation of Red Cross and Red Crescent Societies created an animated video on the importance of safe burial practices—an important part of the awareness campaign, as burial traditions in DRC typically involve community members handling the body with bare hands and praying over the deceased. UNICEF set up handwashing stations in schools and provided Ebola treatment centers with water purification tablets. A Red Cross team also brought in safe burial kits and information posters about proper hygiene practices.

In a country with deep rooted cultural and religious traditions, it’s easy to see why some locals may not adhere to advice from outsiders, increasing the risk of the disease spreading quickly.

Some also point to the importance of international broadcasting. Former Voice of America Deputy Director Joseph Bruns wrote in 2014, "In addition to reporting the news about the outbreak to the region and the world, they [media] are using their multi-language and multi-media capabilities to provide timely and life-saving information to people in the affected areas on specific actions they can take in the face of the disease." Such media interaction is still significant in raising awareness about Ebola and prevention.

But one of the issues with these awareness campaigns is that most of them are led by outside organizations. And in a country with deep-rooted cultural and religious traditions, it’s easy to see why some locals may not adhere to advice from outsiders, increasing the risk of the disease spreading quickly. To this point, there are even reports of infected people refusing to seek treatment from medical professionals because of their religious beliefs about disease.

The Daily Mail reported that "many people in the Congo believe that Ebola is the result of a curse or sorcery and insist that prayer, not medicine, should be used to treat the illness," and that a "distrust of Western medicine runs deep in Congolese culture."

Health workers need to focus their efforts on a top-down approach, instead of the other way around, by educating local pastors and religious leaders, in addition to local government officials.

Superstition is a major obstacle that global health organizations must face when fighting Ebola. Information campaigns are wonderful tools, but only if the individuals they’re targeted at are listening. This points to a need for organizations to work with the local leaders first and foremost. Many patients in Congo went straight to their pastors to pray, instead of seeking medical help. Perhaps health workers need to focus their efforts on a top-down approach, instead of the other way around, by educating local pastors and religious leaders, in addition to local government officials.

"We need to speak the local language and put it into local cultural context and develop trust by doing relatively few things to show respect for where they are coming from, then we can do this vaccination program," said Dr. Barry Hewlett from Washington State University in the Daily Mail article.

He is spot on. Aid organizations should never ignore local customs and traditions and expect to see positive results.

But there is another lesson to take away from this recent outbreak. Information campaigns should not be produced merely as a reaction to a crisis. As soon as there were publicized reports of Ebola, it seemed as if governments and organizations "came to the rescue" with aid, fact sheets, videos on proper burial, etc. But are these available all the time? 24/7? At-risk communities need ongoing, long-term awareness campaigns that can work to socialize these societies toward better health practices in general.

Public diplomacy can be an incredible asset in addressing global health crises, but will be the most successful if it can be employed long-term, and by encouraging collaboration between global agencies and local community leaders.

It seems that our society places high value on response instead of prevention. We see this everywhere, from countering violent extremism, to gang violence, to drug use, and now to health issues. Prevention is key. U.S. embassies, in partnership with aid organizations in Africa, should continue to work with local religious and political leaders on training workshops on healthy burial practices while still protecting local customs even after the ebola outbreak clears. They would be wise to work with teachers to prepare lessons on proper hygiene for students in ongoing ways and with medical professionals to identify capacity gaps in treatment centers and find solutions to fix them.

Public diplomacy can be an incredible asset in addressing global health crises, but will be most successful if it can be employed long-term, and by encouraging collaboration between global agencies and local community leaders.

Madison Jones is the Pacific Council’s Communications Associate and a recent graduate of the Master’s in Public Diplomacy program at USC Annenberg.