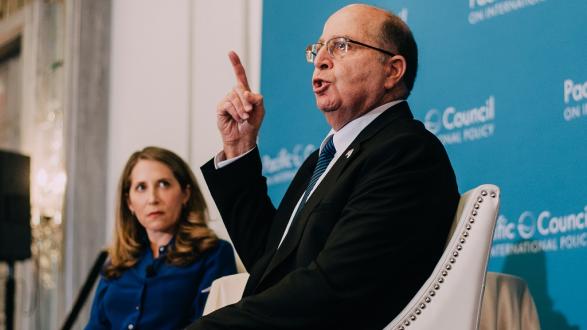 The Israel-Palestine conflict should be managed, not solved, Moshe Ya’alon told Pacific Council members during a discussion about modern Israeli defense policy and U.S.-Israel relations. The discussion was moderated by Jessica Yellin, former chief White House correspondent for CNN. Ya’alon served as Israel’s defense minister from 2012 to 2016.

"In a sober and realistic way Israel manages to enjoy a relatively calm security situation," said Ya’alon. "Against all odds we have peace and quiet on the Israeli side of Golan Heights, along the border with Egypt, and along the border of the Gaza Strip as a result of realistic defense policies."

According to Ya’alon, an element of Israel’s "realistic" defense strategy is giving up on the belief that a two-state solution is possible.

"Calling for full separation under the slogan ‘two states for two peoples’ — [Palestinian President] Abu Mazen is not even ready to say two peoples. He denies the existence of the Jewish people," he explained. "My proposal is to manage the situation, not solve it, from the bottom up. Let’s improve the economy, the infrastructure, and security."

Yellin pointed out that "there are people in Israel who are concerned that the failure to reach an agreement and achieve some sort of peace with the Palestinians is a mortal threat to the survival of Israel."

Ya’alon said he did not agree with that viewpoint. "I’m not afraid of this idea that if we don’t solve the problem it will be sad for Israel," he said.

"My proposal is to manage the situation, not solve it, from the bottom up. Let’s improve the economy, the infrastructure, and security."

He added that, in his view, the conflict stems from the Palestinians’ intention to eliminate the state of Israel as a Jewish state.

"What is this conflict all about? I originally thought it was a territorial issue," he said. "As I sanctified life more than land, I wanted to give up land in order to have peace and tranquility, to save lives. But looking back, if I have to describe in a nutshell what this conflict is all about, it’s not about occupation since 1967; it’s about occupation since 1948. It’s about our very existence. It’s about [the Palestinians’] reluctance to recognize our right to exist as a nation state of the Jewish people. Their objective is not to build a Palestinian state along 1967 lines. It’s to eliminate the state of Israel as a Jewish state."

Ya’alon also claimed that Palestinian textbooks and television programs aimed at children teach them to hate Israel from a young age.

"I have kids and grandkids and I teach them to sanctify life rather than death," he said. "We do not educate our young generation, generally speaking, that the Palestinians don’t have rights. We don’t educate them to hate Arabs, although we have problems. I don’t ignore it. On the Palestinian side, they promote death and hatred. I’m talking about the official educational curriculum and official media."

"We have a strategic relationship between the United States and Israel," said Ya’alon. "It’s a cornerstone of our national security. As defense minister I can testify that we enjoy a deep, intimate, and very good relationship between the Pentagon and Ministry of Defense, and we are grateful for it. But we have reservations. We have disputes on what should be done in the region, in Egypt, in Syria, and so forth. One of the main disputes is about the Israeli-Palestinian conflict."

Ya’alon also said that it was a mistake for the United States to try to democratize the Middle East.

"We believe in democracy, but I don’t believe it’s going to happen in the coming future because of certain fundamental elements which we ignore as western people," he asserted. "In our society, as an example, we sanctify life. So how can you talk about human rights or women’s rights in a society that doesn’t appreciate human life?"

On the Iran nuclear deal

The nuclear deal with Iran was condemned by Israeli Prime Minister Benjamin Netanyahu and other Israeli leaders at a time when terrorist attacks are on the rise in the Middle East and Europe. Ya’alon said the only good thing about the deal is that it delays Iran’s nuclear capabilities.

"The deal as a whole is very bad news," he said. "The Iranians succeeded in this deal to keep all their indigenous capabilities to produce a bomb. They cannot do it now or they’ll violate the deal, but within nine to 14 years they can do it without violating the deal. They won’t be restricted in their efforts to produce a bomb. We have to deal with this situation now."

"The military option is a last resort [to stop Iran's nuclear program]...but at the end of the day, Israel should be ready to defend itself by itself."

Ya’alon said that because Iran is the biggest threat to Israel, they must not be allowed to have a nuclear weapon. When asked if he thinks a military invasion and occupation of Iran should be considered, he argued Iran’s nuclear ambitions should be stopped by one way or another.

"The military option is a last resort," he said. "I have a lot of experience regarding wars, and as a result of it I aspire for peace. You use military power when other alternatives have been exhausted. That’s why I call for coordination and cooperation now in order to prevent a nuclear Iran. But at the end of the day, Israel should be ready to defend itself by itself, whether it is regarding Iran or other parties in the region aspiring to have nonconventional capabilities with the intention to wipe Israel off the map of the earth."

The views and opinions expressed here are those of Mr. Ya'alon and do not reflect the official policy or position of the Pacific Council.