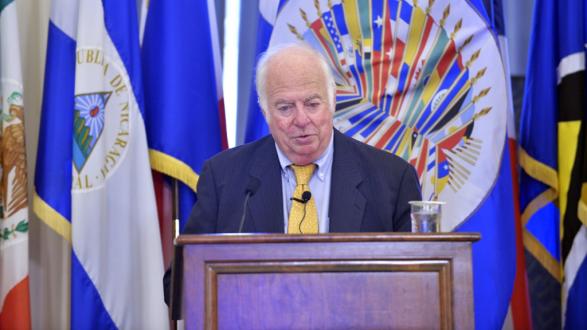 The Wilson Center has announced its plans to create a visiting fellowship in honor of Abraham F. Lowenthal, the founding president of the Pacific Council on International Policy and USC Professor Emeritus of International Relations. Lowenthal established the Wilson Center’s Latin America Program (LAP) 40 years ago in an effort to stimulate more thoughtful U.S.-Latin America policy by providing a platform for Latin American scholars, writers, and policymakers to engage with Washington.

The Abraham F. Lowenthal Public Policy Fellowship will offer scholars, public intellectuals, and policymakers from Latin America and the Caribbean the chance to foster productive global dialogue while working alongside other Wilson Center Fellows of diverse nationalities and expertise. The Wilson Center has supported over 300 Latin American researchers over the decades and established an international reputation as a home for critical and open inquiry.

"I thank Cynthia Arnson for her initiative to launch a special public policy fellowship program for Latin Americans in my name, her program board for supporting this initiative, and Jane Harman for authorizing the fellowship," Lowenthal said as he accepted the Woodrow Wilson Award for Public Service on September 28, 2017, in Washington, D.C., where the Abraham F. Lowenthal Public Policy Fellowship was announced. "When we launched the Latin America Program, we wanted to improve the quality of attention paid to Latin America and its creative thinkers and doers at the nexus of the worlds of ideas and action, and to strengthen collaboration between people from throughout the Americas on scholarship and on issues of shared concern."

While professor of international relations at USC in 1995, Lowenthal founded the Pacific Council on the idea that the U.S. West Coast should be a powerful player in international affairs. Lowenthal received his AB, MPA and Ph.D. degrees from Harvard University and is an internationally renowned expert on Latin American and Caribbean affairs.

His long list of credentials includes serving as a senior fellow with the Brookings Institution’s Latin America Initiative, a Mellon Scholar at UCLA, a member of the Pew Advisory Committee at the Center for International Studies, a two-time Fulbright scholar, and more.

Lowenthal has delivered lectures all over the world and has published four books and more than a hundred journal articles. He testified before the U.S. Congress on issues ranging from the Panama Canal to U.S. interests in Latin America, and is currently researching the craft of think tank institution building in the U.S. and abroad. Lowenthal is also known for his research on California’s global role and the international importance of the West Coast. In 2009, he received the LA Chamber of Commerce Stanley T. Olafson Bronze Plaque Award for contributing to the development of world trade in Southern California.