What Does This Flag Mean? 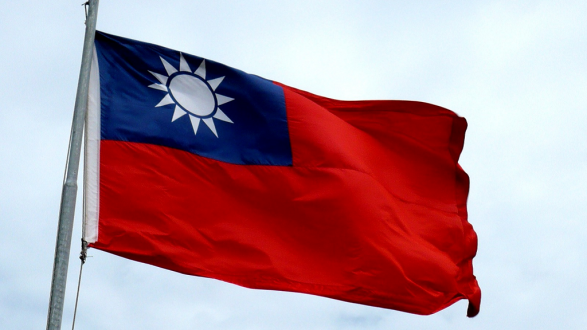 By:
James B Cutchin
Meijun Li

Blue sky, white sun, and a wholly red earth—the flag of the Republic of China has been a controversial symbol since its inception more than a century ago. Today, most associate the flag with the modern government of Taiwan, a territory whose sovereignty is one of the most sensitive political flashpoints in East Asia. Yet it can also be found flying above the roofs of Los Angeles' Chinatown, despite the lack of any familial or ancestral ties to the island among most local ethnic Chinese.

This unusual phenomenon has its roots in the political turmoil of the early 20th century. According to Eugene Moy of the Chinese Historical Society of Southern California, overseas Chinese communities were often hotbeds for anti-imperial sentiment. The Qing Dynasty (1644-1912), who were not ethnic Chinese, were viewed by many as illegitimate rulers of China. This was doubly so among overseas Chinese, according to Moy. "Those people who had been exposed to a democracy or a republic form of government abroad especially wanted out from imperial rule," he said.

Many Chinese-American community organizations, including numerous tongs, or family associations, continue to fly the Republic of China flag to this day.

Moy says that this allegiance was strengthened in World War II, when America, and many Chinese-American soldiers, fought as allies of the Chinese Nationalists.

"When these soldiers came back and participated in community life, they flew the Kuomintang flag at their community organizations," said Moy.

In 1979, the United States switched official diplomatic recognition from the Republic of China in Taipei to the People's Republic of China in Beijing. Moy says that anti-communist sentiment prevented groups in LA’s Chinatown from flying the newly recognized mainland Chinese government's flag.

While the associations can fly whichever flag they wish on their own property, Chinatown's public spaces are officially neutral ground.

"There are many individuals here whose families suffered at the hands of the Communist Party, whether it was through the confiscation of land or persecution of people who were perceived to be wealthy," said Moy.

Many Chinese-American community organizations, including numerous tongs, or family associations, continue to fly the Republic of China flag to this day. Among these are Los Angeles Chinatown's Chinese Consolidated Benevolent Association, Gee How Oak Tin Association, Hop Sing Tong, and Bing Kung Tong. The latter of these, the Los Angeles Bing Kung Tong, has a Taipei Economic and Cultural Office reading room on its ground floor. This is one of a handful of formal and informal political ties connecting the tongs, most of which have their roots in clans or groups from mainland China, with the modern Republic of China government in Taiwan.

While the associations can fly whichever flag they wish on their own property, Larry Jung, president of the Los Angeles Chinatown Corporation, says that Chinatown's public spaces are officially neutral ground.

"We actually had to cut down all the flag poles. People just wouldn't stop putting their flags up."

Jung's corporation, which built most of LA’s Chinatown more than 80 years ago, forbids display of either the nationalist or communist flags in areas such as Chinatown's Central Plaza.

"We actually had to cut down all the flag poles," said Jung. "People just wouldn't stop putting their flags up."

Jung said that supporters of both sides would try and use the space in Central Plaza to demonstrate and display their flag, although nationalists were the more frequent offenders.

The only exception to Chinatown's neutrality policy is on the yearly October 10th celebration of the founding of the Republic of China. On that day, Chinatown's Main Plaza is filled with nationalist flags.

"The point of that is really to honor Dr. Sun Yat Sen," said Jung. "He's revered even in the mainland as the founder of modern China."

Despite the ever-growing strength and influence of the People's Republic of China on the world stage, the flags across Chinatown are unlikely to change in the near future.

Despite the ever-growing strength and influence of the People's Republic of China on the world stage, Eugene Moy thinks that the flags across Chinatown are unlikely to change in the near future.

"As long as that generation is around that remembers all of that conflict and all of the losses that were suffered, there's going to be resistance to flying the PRC [People's Republic of China] flag," said Moy. He adds that the ongoing disputed status of Taiwan's sovereignty helps keep the conflict alive, leaving some unwilling to relinquish loyalty to the Republic of China—wherever it is.

"I don't see that going away any time soon," said Moy.

The Los Angeles Consulate General of the People's Republic of China could not be reached for comment on this story.