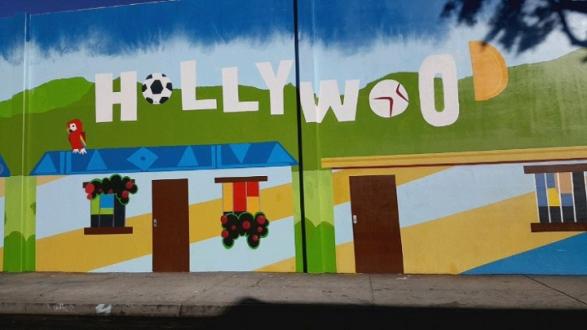 Dassler Jiménez told everyone back home in Venezuela that he would leave if Hugo Chávez came to power, believing that the country was “going to go to hell” if he did. Jiménez arrived in Los Angeles in 1999 with a tourist visa, and not much else.

Jiménez, who is now a self-described Latino activist and serves as a board member on the Hollywood Studio District Neighborhood Council, had been a telenovela actor and model in Venezuela. When he first arrived 20 years ago, he said he had to start from the ground up, like everybody else.

“It took me three years of hard work until I started getting on my feet,” Jiménez said. “And after [Nicolás] Maduro [the current Venezuelan president came to power], when [a lot of immigrants] started coming in, I thought, ‘OK, a lot of people come here starving, and they don’t know what to do, so they are [going through] the same process that I did.’ It was really hard for me to start. And then Facebook came out at that time.”

Jiménez launched a Facebook group and started Little Venezuela Community, which began as an initiative to help Venezuelan immigrants navigate the city and over time, took on bigger projects.

Jiménez launched a Facebook group and started Little Venezuela Community, which began as an initiative to help Venezuelan immigrants navigate the city, from providing information on where to find jobs and cheaper rent to what supermarkets to find Venezuelan items. Over time, Jiménez took on bigger projects, like creating an art mural symbolic of his native culture in Hollywood with a coalition of Venezuelans and other Latinos in the community.

“I wanted to have a little something that we could call home,” said Jiménez, who hopes to eventually expand the project to become a neighborhood officially recognized by the city, similar to the El Salvador Corridor, just north of USC. Today, Jiménez’s Facebook group has over 2,000 members.

In the years since Little Venezuela Community came into being, the situation in Venezuela has steadily worsened, with many Venezuelans finding themselves scrambling to fulfill basic needs. Little Venezuela Community has responded by organizing charity events in LA geared towards donating and sending care packages with food and medical supplies to Venezuela. Jiménez said that he talks to his family back home in Venezuela every day, and that they sometimes go three, four, or five days without electricity. He added that when the electricity is gone, it means the water is gone, too.

Stateside, the Trump administration has been imposing increasingly restrictive policies on refugees and asylum-seekers over the years, and recently denied Venezuelans Temporary Protected Status.

“They don’t have the basic things to survive,” Jiménez said. “So [people there] are going through a lot of hard times. Because even if we send money, even if we send food, we cannot fight with the [lack of] basic services like water, electricity, and gas to cook.”

Javier Corrales, professor and chair of political science at Amherst College in Massachusetts, who studies comparative politics and Latin America, among other things, said that the root cause of the crisis in Venezuela was that over time the state became unaccountable, ran the oil industry into the ground by not investing in it, and over-regulated the private sector. He said that ultimately this has had perhaps the “most horrific outcome” for any democracy in the world.

"Brazil, Colombia to an extent, Ecuador, and Peru have accepted hundreds of thousands of immigrants and have been understanding of Venezuelans not having the right papers."

He said that Venezuelans are now reviewing their caloric intake, reducing their “consumption of health,” and spending time going around grocery stores trying to find available products. People, he added, are not reporting to work, and for those who are, the productivity is low.

Stateside, the Trump administration has been imposing increasingly restrictive policies on refugees and asylum-seekers over the years, and recently denied Venezuelans Temporary Protected Status (TPS), which would have allowed a small portion of Venezuelans to temporarily come to the United States. The United Nations estimates that by the end of 2019, almost 5.5 million Venezuelans will flee the country.

Katja Newman, a Pacific Council member who consults with KSN Consulting Inc., an organization that helps corporations and business associations research or expand in Latin American markets, said that Venezuela’s neighboring countries have stepped in to help many of those fleeing.

Jiménez said that the current climate in the United States gives him déjà vu.

“Brazil, Colombia to an extent, Ecuador, and Peru have accepted hundreds of thousands of immigrants and have been understanding of Venezuelans not having the right papers,” she said. “The fact that they have worked to try and absorb this kind of human tragedy I think is admirable.”

For Jiménez, the current U.S. administration serves as an ominous reminder of patterns he said he observed with the governance in his home country for years. He described Venezuela as once having been the “United States of South America” and said that he sees President Trump as the “American Chávez.” He said that the current climate in the United States gives him déjà vu.