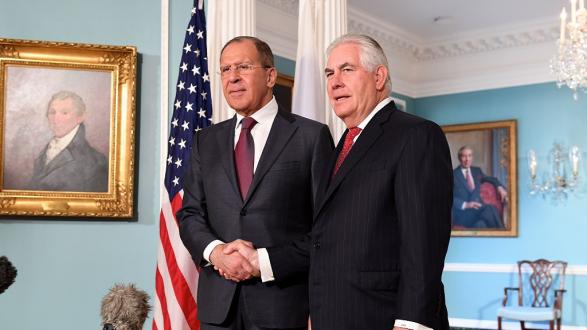 The United States and Russia may have an adversarial relationship, but that does not mean they cannot cooperate on issues of mutual concern and interest, Dr. Agnia Grigas and Dr. Vidya Nadkarni told Pacific Council members in the fourth installment of the Pacific Council’s Summer Teleconference Series, on the changing security dynamics of the U.S.-Russia relationship.

President Trump has inherited a relationship with Russia fraught with more tension than at any point since the Cold War. Russia’s 2014 invasion of Ukraine sparked fear that its belligerence could threaten the territorial integrity of NATO’s eastern members while raising questions about NATO’s ability to deter Russian aggression in its immediate neighborhood and beyond. In the Middle East, Russia obstructs U.S. policy in Syria by arming the Assad regime and providing diplomatic cover for its assaults on U.S.-backed Syrian rebels. Meanwhile, several investigations are underway in the United States to determine the impact Russia had in influencing the outcome of the 2016 presidential election.

"Since the end of the Cold War in 1989, the U.S.-Russia relationship has always had an adversarial element, but this has not precluded pragmatic, bilateral cooperation between the two," said Nadkarni. "President Vladimir Putin was one of the first world leaders to extend a hand in cooperation after the 9/11 attacks, providing both intelligence and logistical support for Operation Enduring Freedom in Afghanistan."

"Russia’s role in Syria, Moscow’s increasingly assertive military moves in response to what is seen as NATO provocation, and the issue of sanctions will continue to roil the bilateral relationship between Russia and the United States."

Nadkarni cited other examples of U.S.-Russia cooperation, including President Obama’s 2009 relations "reset." However, tensions have been under the surface with missed opportunities over the years, she said. With Putin’s return to the presidency in March 2012, U.S.-Russia relations took a pronounced downward turn. Nadkarni said that Putin was mistaken when he blamed then-Secretary of State Hillary Clinton for inciting widespread protests in Moscow and other major cities against his 2012 election and claimed that the United States was either directly or indirectly behind all the protest movements in the post-Soviet space. In reaction, Putin attempted to block Clinton’s election to the presidency in the 2016 election.

"So far, Moscow is alleged to have intervened by hacking the Democratic National Committee’s servers and subsequently releasing selected emails through WikiLeaks, and by disseminating fake news and propaganda and using online amplifiers to spread the information to as many internet users as possible, all in an effort to thwart the election of Hillary Clinton," said Nadkarni.

In response to Russia’s election meddling, President Obama ejected 35 Russian diplomats from the United States, confiscated two Russian compounds, and placed sanctions on Moscow, which Putin hoped the incoming Trump administration would rescind. When it did not, Russia retaliated by cutting and capping staff levels at the U.S. embassy in Moscow. Trump responded by halting non-immigrant visas from Russia and ordering Russia to close its consulate in San Francisco and two diplomatic annexes in New York and Washington, D.C.

With escalating retaliatory moves taking place, Nadkarni and Grigas do not see the adversarial aspect of the U.S.-Russia relationship changing in the near future.

"The future of U.S.-Russia relations is likely to be fraught and increasingly fractious," said Nadkarni. "Russia’s role in Syria, Moscow’s increasingly assertive military moves in response to what is seen as NATO provocation, and the issue of sanctions will continue to roil the bilateral relationship."

"If Russia seeks this great power role in its neighborhood in the 21st century, the current approach it is pursuing—cyber warfare, spreading propaganda and misinformation, sponsoring wars—is not going to make it very easy for them."

Grigas agreed, however, that U.S.-Russia cooperation is possible, considering it has happened in the past when the relationship was even more adversarial.

"The United States and Russia are not geopolitical allies, they’re actually more like rivals," she said. "At the same time, it is a fact that even during the height of the Cold War, the United States and the Soviet Union—despite being geopolitical rivals—did find room for cooperation and common ground on issues that are of core importance to them.

"Nonetheless, today they are nowhere near semi-equal powers as they were during the Cold War," Grigas continued. "Russia certainly is a diminished power. If Russia seeks this great power role in its neighborhood in the 21st century, the current approach it is pursuing—cyber warfare, spreading propaganda and misinformation, sponsoring wars—is not going to make it very easy for them."

Grigas said she does not believe that Putin’s leadership has been the sole factor in the souring of U.S.-Russia relations in the past 10 years, nor does it explain all of Russia’s geopolitical ambitions or aggressive behavior.

"Russia and the United States still have quite a different worldview," she said. "Even though communism is no longer Russia’s ideology, it still contrasts with the liberal democratic order led by the United States."

"As the United States and other new energy producers eat up shares of Russia’s energy market, things are going to get worse for Russia. Then we will really see if the people rise up and change the regime or the economy."

Grigas pointed out that the United States was not the only western country in which Russia used its data hacking and misinformation campaign.

"We saw Russia’s role in trying to sway the Brexit vote in the United Kingdom, the reform referendum in Italy, and the national elections in the Netherlands and France, and of course Germany is gearing up for its own national election and they are already preparing for Russian cyber-attacks and trying to mitigate information warfare," said Grigas. "Russia’s toolkit has been directed toward the West, very much in a Cold War fashion."

Grigas added that Americans should keep in mind that the Russian public is not anti-American in general and that not everyone supports Putin’s government, though it may seem that way.

"There’s a lot of violence from the government in cracking down on any sort of resistance right now," she said. "How bad would it have to get for people to really go out massively into the streets? It will have to do with the economy. We really have to watch the energy market, because Russia is largely dependent on oil and gas revenues for its livelihood. Meanwhile, the United States has emerged as an energy superpower. As the United States and other new energy producers eat up shares of Russia’s energy market, things are going to get worse for Russia. Then we will really see if the people rise up and change the regime or the economy."

The Pacific Council’s Summer Teleconference Series continues with a discussion about Germany’s upcoming election on September 21. Read summaries of the previous discussions in the series here.