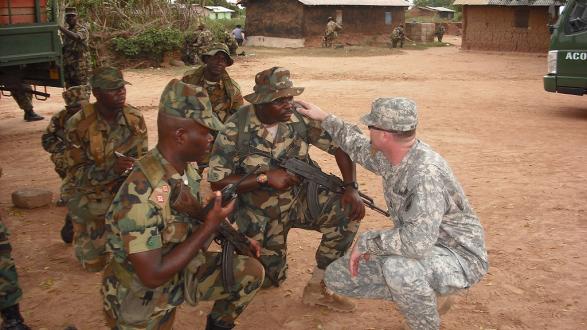 U.S. policy in Africa should focus more on strengthening good governance and economic growth and less on military operations, experts told Pacific Council members in a Situation Briefing teleconference about the operations of the U.S. armed forces in Africa.

General David M. Rodriguez is the former commander of U.S. Africa Command (USAFRICOM). Mr. Grant T. Harris is the CEO of Harris Africa Partners LLC and previously served as special assistant to President Obama and senior director for African affairs at the White House from 2011 to 2015. He recently published a report titled Why Africa Matters to U.S. National Security. Ms. Amanda J. Dory is the former deputy Assistant Secretary of Defense for African Affairs at the U.S. Defense Department. Dr. Megan Becker, a lecturer at the USC School of International Relations, moderated the discussion.

Plagued by countless complex security issues that many experts classify in the "gray zone" of conflict, USAFRICOM—and the many African governments it cooperates with—faces volatile and uncertain political environments that are caused by rampant religious, economic, and cultural conflict. U.S. military forces are currently conducting about 100 missions in Africa at any given time.

"The U.S. military has played an important role in Africa, but it needs to fit into supporting a broader strategy," said Harris. "Over time, U.S.-Africa policy has been bipartisan, consistent, and focused on strengthening democratic institutions, advancing peace and security, strengthening development, and spurring trade, investment, and economic growth more broadly. We are seeing a break in this strategy and from these goals right now with this current administration. I fear we’re seeing a militarization of U.S.-Africa policy."

"If we’re only looking at the continent through the soda straw of counterterrorism and leaving out more holistic solutions to instability and conflict, we won’t be effectively countering violent extremism."

He pointed to the proposed Trump administration budget for the coming fiscal year as prioritizing military action over humanitarian aid, development, and diplomacy. The budget, which was rejected by Congress, would have reduced aid to Africa from $8 billion to $5.2 billion.

"Those proposed allocations speak volumes in terms of the emphasis and worldview of the existing administration," said Harris. "We’ve seen that Africa has been less of a priority in terms of appointing leadership positions. Our embassies are idling somewhat, and there has been more of a focus on weapon sales to Nigeria or the rules of engagement in Somalia, but much less talk about governance, economic growth, and trade and investment issues. There is much more of a focus on the military and security tools, but those are less of a holistic approach. If we’re only looking at the continent through the soda straw of counterterrorism and leaving out more holistic solutions to instability and conflict, we won’t be effectively countering violent extremism. We have to look at job creation, supporting African partners in improving governance, and development."

Dory pointed out that "good governance" does not necessarily have to mean a Western style, multiparty democracy.

"What we need is good enough governance and progress to the point where you have government authorities with domestic legitimacy, power that alternates over time, checks and balances in terms of how power is accumulated and how resources are distributed," she said. "It has been such a short period of time since the majority of African countries became independent from colonial powers. Sometimes we fail to appreciate exactly how young these states are, and how they are struggling with basic state formation. Africa is still evolving. Some parts of it are evolving on a swift and positive trajectory, and other parts are failing. When we try to speak in generalizations about 54 different countries, we find ourselves in trouble at times."

Dory added that when it comes to U.S. assistance, what African countries need principally is investment and trade. She said that the private sector has an opportunity to step up.

"The American private sector is lagging, while other countries take full advantage of some of the investment opportunities in Africa."

"It’s fair to say that the American private sector is lagging, while other countries take full advantage of some of the investment opportunities in Africa," she said. "Within the U.S. government, State Department and USAID resources that focus on developing human capital, strengthening institutions, and economic development are critical. From a Department of Defense perspective, the department does not need more resources for Africa."

Harris added that U.S. businesses in particular are not seizing the economic potential that Africa presents.

"With China’s growing role on the continent, with North Korea looking to Africa to try to evade sanctions, with Russia hedging U.S. sanctions there, we’re not maintaining and deepening the strong bilateral relations with African countries on a whole range of issues," he said.

Dory said she does not think the United States needs to be concerned or feel competitive about China’s broadening role in Africa, while Harris said that at the same time, "American businesses need to be doing more to promote investment in African states because they are missing out on opportunities."

"The U.S. military's long-term effort and strategic solution is really building the capacity of the Africans so that they can do it themselves."

"We do very well at the tactical level, we’re less effective at the operational level, and at the institutional and strategic level it’s a long-term challenge that we continue to work on," he said. "The U.S. military engages with every level of government in host nations in Africa, from the tactical level and the people in the field all the way up to the minister of defense."

He explained that U.S. military exercises have expanded in Africa. Whereas they used to host primarily bilateral exercises, they now conduct many regional ones and work with multilateral groups like the African Union’s economic councils.

"This has been a change in Africa: we now see many different African nations working together on issues like Boko Haram and the conflicts in Mali and Somalia," he said. "Ten years ago, African soldiers made up about 28 percent of the UN peacekeeping missions, and now they’re up to 48 percent. This has been a huge capacity change over time that has been very helpful. Our exercises aim to work on the challenges African nations’ militaries face, such as command and control, intelligence, logistics, special operations, and special skills that they need."

Counterterrorism is a major area in which the U.S. military engages with African nations. Harris said he found it difficult to understand why Chad was added to the Trump administration’s travel ban, considering Chad’s long-time cooperation on terrorism and other issues.

"African-led solutions to African problems is an African Union mantra, which is something the U.S. government supports."

Rodriguez pointed out that U.S. military operations get a lot of press but that they are actually a small percentage of what they do in Africa. Those operations focus on counterterrorism against ISIL, al Qaeda, and the Islamic Maghreb in the north and west, Boko Haram in and around northern Nigeria, and the long-term fight against al Shabaab in Somalia. Dory pointed out that unemployment is the most cited issue for those who join extremist organizations in Africa.

"One of the primary things the U.S. military does in Africa is intelligence sharing, and the other is advise and assist," said Rodriguez. "Those are the ways we interact and engage with Africa. The long-term effort and the strategic solution to this is really building the capacity of the Africans so that they can do it themselves. The toughest challenge there is building the institutions at the national level that can man, train, equip, and lead the effort so they can sustain themselves."

Harris added that the U.S. military is focused on helping African nations’ militaries professionalize and confront threats in their region.

Dory agreed, explaining that "African led solutions to African problems is an African Union mantra, which is something the U.S. government supports."

This teleconference was held in advance of Representative Karen Bass’ keynote discussion on U.S.-Africa policy at Members Weekend 2017.