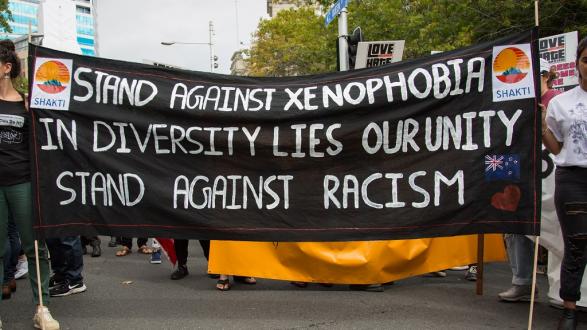 At a time when COVID-19 is making global solidarity and cooperation more important than ever, President Donald Trump is instead continuing to push a divisive and nationalistic agenda.

He has contradicted guidance from health experts, called COVID-19 the “Chinese virus,” refused to alleviate the density inside migrant detention centers, and implemented unnecessary, draconian restrictions along the southern border. No longer simple political jockeying, the president’s inability to abandon racially divisive statements and actions will inflame our public health crisis.

Trump’s immigration system has repeatedly ignored its own recommendations to slow the spread of COVID-19 among detainees, risking the lives of thousands. Since detainees cannot practice social distancing, the chances of an outbreak are high, which will threaten those with pre-existing medical conditions as well as workers traveling in and out of the facilities.

The Trump administration also continues to force thousands of immigrants and their legal advocates to attend crowded courtrooms and file in-person motions, endangering those attempting to comply. This is consistent with the administration’s history of efforts to hamper pathways for legal immigration by any means necessary.

Academics believe Trump’s repeated use of the phrase “Chinese virus” has helped spur an increase in reported anti-Asian hate incidents.

Attorney General William Barr has asked Congress to craft legislation allowing the Department of Justice to suspend certain constitutional rights, specifically by giving chief judges the power to detain people indefinitely. This will only cram more vulnerable detainees together, out of reach of the health care system.

In March, Republican Sen. Rand Paul of Kentucky—a staunch ally of the Trump administration on immigration policy—made the revelatory remark that “taxpayer money shouldn’t go to non-people,” in reference to undocumented immigrants. Beyond categorizing immigrants as non-human, his statement falsely inferred that undocumented immigrants pay no taxes.

Meanwhile, Trump has shut down the border to immigrants on public health grounds, despite the U.S. having more COVID-19 cases than Mexico and all of Central America combined.

It would not be the first time in Trump’s presidency, much less American history, that the president problematized a crisis across ethno-nationalist lines. During WWII, FDR interned some 120,000 Japanese Americans. Following 9/11, George W. Bush detained more than 1,000 Muslims without cause and quietly deported thousands of others. What followed was a surge in violence against Muslims and Americans of perceived “Arabness.”

U.S. officials  promote a message of unity and support so citizens are encouraged to help each other through the crisis rather than pass blame. The coronavirus pays no mind to citizenship status. Neither should public health.

In 2016, Trump’s xenophobic rhetoric against Muslims and Latinos led to a 79 percent surge in anti-Muslim harassment and a 21 percent increase in anti-Latino hate crimes, according to the FBI.

Academics believe Trump’s repeated use of the phrase “Chinese virus” has helped spur an increase in reported anti-Asian hate incidents such as the recent stabbing of three Asian shoppers, including a two-year-old and a six-year-old, at a Sam’s Club in Midland, Texas.

Trump has repeatedly chosen opportunism over public health, but crises should not be used for promoting restrictionist policies against immigrants.

Instead, U.S. officials should shut down immigration courts and thin out over-crowded detention centers, denounce scapegoating, and promote a message of unity and support so citizens are encouraged to help each other through the crisis rather than pass blame.

The coronavirus pays no mind to citizenship status. Neither should public health.

Eliane Fersan is a Pacific Council member and the director of the Immigrants and Global Migration Initiative at the USC Gould School of Law.

Kai Golden is a research fellow with the Immigrants and Global Migration Initiative.

This article was originally published by The Progressive.