Technology, Democracy, and the Disinformation Crisis 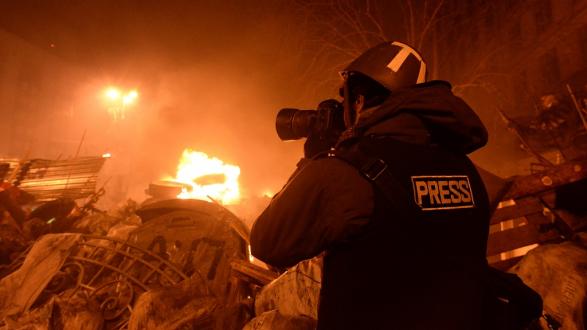 Press freedom around the world is in a state of crisis, experts recently told Pacific Council members.

Sewell Chan, deputy managing editor of the Los Angeles Times, moderated the conversation, which featured Maria Ressa, founder, CEO, and executive editor of the Philippine website Rappler, and Joel Simon, executive director of the Committee to Protect Journalists. During an era where journalists are increasingly incarcerated or killed and media outlets are undermined in autocratic and democratic states alike, Ressa and Simon scrutinized technology’s role in the current disinformation crisis.

Simon began by noting that a list of the 10 most censored countries in the world reveals two common methods of censorship. The first, as exemplified by countries such as Eritrea and North Korea, is brutal and traditional: the state retains a legal monopoly of broadcast media, journalists are frequently put behind bars, and the media is required by law to promulgate national objectives.

The second, as exemplified by countries like Iran and Saudi Arabia, is less obvious: active online communities are allowed to exist, but this welcome technology is turned against the population as a system of monitoring control, and surveillance and suppressed coverage of sensitive topics is rampant.

Press freedom around the world is in a state of crisis, experts recently told Pacific Council members.

Chan asked Simon and Ressa if “the challenge that technology presents is different in scale or nature from what we have seen before?”

According to Ressa, the challenge is both different and significant. She asserted that the use of technology to control the public—whether it be via data collection, micro-targeting, or misrepresentation—constitutes an unprecedented threat and should be treated as a terrorist function.

“What technology has enabled is something that the human mind cannot absorb,” she said. “It is a threat to elections, to integrity, and it is the reason journalists, who hold the line of fact, are under attack. And when you put us under attack, democracy is under attack.”

This attack on democracy was prominently showcased by Russian interference in the 2016 U.S. presidential election. As Simon reminded attendees, meddling in foreign elections is nothing new. He argued that elections in fact were recognized as crucial during the Cold War, when the management and control of information spaces first became apparent. However, the subversion of technology to achieve and retain political control marks a modernized approach.

The threat of arrest, Ressa explained, is the reason reporters are most at risk in these regimes.

Taking place just as social media was becoming the world’s largest distributors of news, Russian manipulation of online news sources demonstrated the magnified polarization that technology enables. Leaders have always derived their power from their ability to win elections, Simon pointed out, but now they have a new tool. He concluded, “technology is amplifying historic forces.”

However, even with the most supremely powerful and autocratic leaders, it is possible to imagine a scenario in which they lose these elections. Simon contends that what threatens these leaders and their chances of securing elections is reporting.

Ressa is an outspoken critic of Philippine President Rodrigo Duterte and has been arrested herself for her work as an investigative journalist. The threat of arrest, Ressa explained, is the reason reporters are most at risk in these regimes. While mass technology is misused to spread lies by people with undemocratic malintent, she noted that journalists are both figuratively and literally handcuffed for holding ethical standards. She maintained that information is power, and as the conveyors of information, journalists must be protected.

So how can the international system adapt to technology’s impact on information dissemination? Ressa and Simon suggested structural and social reform. Simon reinforced the notion that the internet is a shared global resource, and while it may be abused, it also allows for collaboration. That is why Simon and the Committee to Protect Journalists advocate for press freedom and are currently working to help support Ressa’s platform as a reporter in the midst of pending lawsuits against her.

"Now we need the world to come together, just like in other post-war periods, to prevent us from doing the worst to each other."

Ressa herself is working on the recently launched Information Democracy Commission. Both agreed that in order to establish the correct precedent for handling media manipulation, society must properly acknowledge the Mueller Report and the shortcomings of the Trump administration in preventing the spread of disinformation. Furthermore, they encouraged the establishment of both legislative and social guidelines to the internet, taking into account what values must be upheld and how cyber law helps enforce these values.

Simon acknowledged that the media has always been flawed. However, it has never before faced a multinational threat as omnipresent as technology. Ressa urged global collaboration to navigate this unfamiliar territory and to help mitigate this threat. She stressed, “Now we need the world to come together, just like in other post-war periods, to prevent us from doing the worst to each other.”