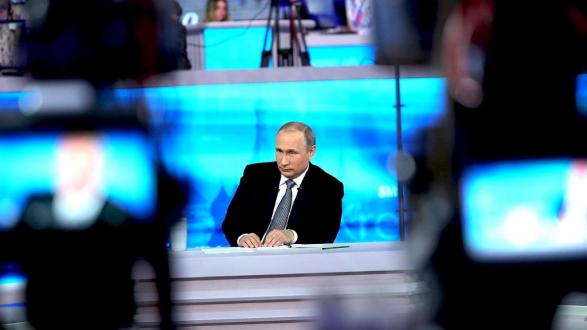 The Cold War is back. And this time it’s personal.

A quarter century ago, America won the Cold War. After a long, patient, cohesive diplomatic campaign, the West prevailed in the early 1990s, and the Soviet Union collapsed. A decade later, Russia became intent on re-establishing itself as a great power on the world stage. Now Russia is resurgent, with greater ambitions than ever and a sophisticated 21st century foreign policy toolbox blending the techniques of military, cyber, and information warfare.

On September 14, Russia began the "Zapad-2017" joint strategic military exercises, the largest since the Cold War with up to 100,000 Russian troops mobilizing on the European Union’s eastern borders. NATO is appropriately concerned about these maneuvers on the ground, but generals and other military experts warn that Russia’s propaganda tactics—exercised through the channels of online, social, and traditional media—may be more effective than conventional weapons.

Russia couldn’t accomplish its Tsarist or Soviet goals through armed conflict, crude propaganda, or a coercive energy policy, but now realizes once unimaginable success through soft power, cyberwarfare, and a tsunami of manipulated news and messaging.

Russia’s interference continues. After troubling protests by white supremacists, counter-protests, and lethal violence in Charlottesville, Virginia, Russia added to the chaos with a flood of tweets produced by bots masquerading as regular folks and spreading fake news stories about the counter-protestors. ProPublica reports that "Angee Dixson" joined Twitter on August 8 and began a flurry of tweets, as many as 90 a day, defending President Donald Trump, criticizing the removal of Confederate monuments, and spreading unproven rumors about violence from counter-protestors. But Dixson was fake, and Twitter removed the account and hundreds of other fictional creations.

Crafting messages to target youth or the marginalized and triggering outrage and despair about issues is easy. One of the authors grew up behind the Iron Curtain in propaganda-ridden, Soviet-controlled Lithuania. To get reliable news, she and her family surreptitiously listened to Voice of America broadcasts. Today, in a sardonic irony of history, this expert and author on Russian foreign policy in Washington watches Russia Today, the Kremlin’s television network known as RT, blast fake news from American televisions.

Russia couldn’t accomplish its Tsarist or Soviet goals through armed conflict, crude propaganda, or a coercive energy policy, but now realizes once unimaginable success through soft power, cyberwarfare, and a tsunami of manipulated news and messaging. Russian influence penetrates deep into Europe and the United States, altering public opinion and the course of political developments.

President Obama warned Putin during the 2016 campaign against hacking, but otherwise remained quiet about the dangers of growing foreign influence in the U.S. political system. In retrospect, this approach was a mistake.

Former U.S. President Barack Obama—intent on avoiding the appearance of political favoritism—warned his Russian counterpart during the 2016 campaign against hacking, but otherwise remained quiet about the dangers of growing foreign influence in the U.S. political system. In retrospect, this approach was a mistake. Another mistake: The current administration’s striking lack of will to address the threat. Clearly, another strategy is required, and the United States and other democracies must rethink their posture toward Russia.

A critical first step is to abandon complacent, misguided assumptions that the West had ever definitively won the soft power and influence contest with Moscow. Even now, the United Kingdom’s 2016 Brexit vote—an outcome abetted by covert and overt Russian influence and propaganda—has substantially weakened the European Union. Initial EU efforts to confront the challenge have been no match, even against RT alone, with a self-reported annual 2016 budget of more than $300 million, available to 700 million viewers worldwide in more than 100 countries. Meanwhile, the U.S. State Department has been slow to make use of the some $80 million earmarked for fighting Russian and terrorist group disinformation, reportedly out of fear of upsetting Moscow.

More recently, the U.S. Justice Department advised RT that it must register as a foreign agent for its U.S. operations, requiring periodic disclosure of the relationship with the Russian government as well as activities, receipts, and disbursements in support of those activities. The same requirements should be made of the Russian government news agency Sputnik.

To counter Russia’s manipulation, the United States and its allies need, at minimum, to project a forceful unified vision of the appeal of liberal democracy and its values.

U.S. citizens must also study up on ongoing propaganda strategies—and take time to seek confirmation for outrageous claims in any news source. The movie Wag the Dog imagined media experts and a film producer conspiring to invent a war with faked footage of conflict. Government-controlled Russian TV often relies on techniques which could have been lifted from the movie, such as using a single actor to play three different people with different names and fictional histories such as spy, bystander, and heroic surgeon in "news" broadcasts on Rossiya 1 national news (Vesti), NTV National News, and the National Independent News of Crimea.

Russian media skillfully blend entertainment, disinformation, and propaganda into a seamless, convincing whole. Over several decades, the distinctions between fiction and reality—and perhaps more importantly the distinction between "reality" television and reality—have become increasingly blurred in U.S. media.  Many viewers do not fully appreciate the extent to which "reality" television is not real at all. Participants are carefully cast, their stories and "drama" shaped by producers, their dialogue if not written out word for word, craftily encouraged by producers and writers.

The characters in these "reality" dramas are recorded on video equipment. Everything they say and do on the show is artificially lit and staged and, tellingly, observed by a crew of up to 100 staff members hovering nearby although hidden from TV viewers. The fictional series Unreal, depicting behind-the-scenes action on an "unscripted" show like The Bachelor may be a fairly accurate wheels-within-wheels evocation of just how constructed and confected such shows are—or illustrate just how hopelessly blurred the lines have become. 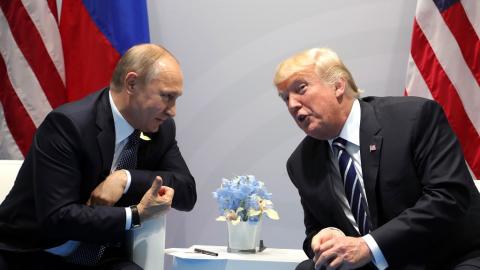 The Apprentice, as artificial and concocted as any series, created the fictional character of Donald Trump as boss, which he parlayed into a winning presidential campaign. It’s hard to imagine that Trump could have become U.S. president without this manufactured "reality" television show, name recognition and celebrity status included.

To counter Russia’s manipulation, the United States and its allies need, at minimum, to project a forceful unified vision of the appeal of liberal democracy and its values. In contrast, it’s self-defeating for the West to watch the U.S. president spend a private tête-à-tête with Vladimir Putin at a G20 state dinner.

The Russians may or may not have kompromat with which to blackmail Trump. There may or may not have been collusion among members of the Trump campaign and the Russian government. Regardless, the dangerous impression that this foreign power holds some nefarious means of influencing the presidency disrupts global affairs and weakens the United States and the West.

If the United States doesn’t respond quickly and definitively to the ominous threat, history books will mark this era as the pivotal moment when world power shifted from liberal democracy to authoritarian dictatorship.

The American people must begin to hear thoughtful, impassioned statements from their leaders, if not their president, condemning interference in the election process. The United States and other democratic countries must commit the full resources of their governments to preventing such activities in the future. And the factions within Washington and other capitals must find the unity, will, and vision necessary to win the new Cold War being waged in the media, social networks, and cyberspace.

If the United States doesn’t respond quickly and definitively to the ominous threat, history books will mark this era as the pivotal moment when world power shifted from liberal democracy to authoritarian dictatorship.
_______________________

Agnia Grigas is senior fellow at the Atlantic Council and the author of Beyond Crimea: The New Russian Empire.

Seth Freeman is a Pacific Council member and a multiple Emmy-winning writer and producer of television, a journalist, and a playwright.

This article was originally published by YaleGlobal.