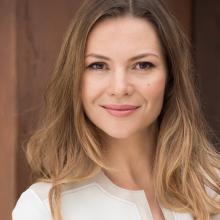 She is the author of three books: The New Geopolitics of Gas (Harvard UP forthcoming 2017); Beyond Crimea: The New Russian Empire (Yale UP, forthcoming 2016); The Politics of Energy and Memory Between the Baltic States and Russia (Ashgate 2013).

In the private sector, Dr. Grigas has more than a decade of experience as an advisor to corporations and government institutions. Her clients have included the likes of Barclays Bank, where she led its international growth initiatives including the opening a global strategic engineering center in Lithuania. Previously, Agnia worked as an associate with leading global consultancy Eurasia Group, where she advised on emerging markets for its multinational clients. Agnia began her career as a financial analyst at JP Morgan, where she worked on Eurobond issuance for corporations and governments.

She has been awarded the Truman National Security Fellowship (2015-2016) and served as nonresident Senior Fellow at the McKinnon Center for Global Affairs at Occidental College.

An experienced communicator on screen, in print, and in person she is an official contributor to The Hill and a frequent media commentator (CNN, Forbes, LA Business Journal, Bloomberg, and Reuters among others).