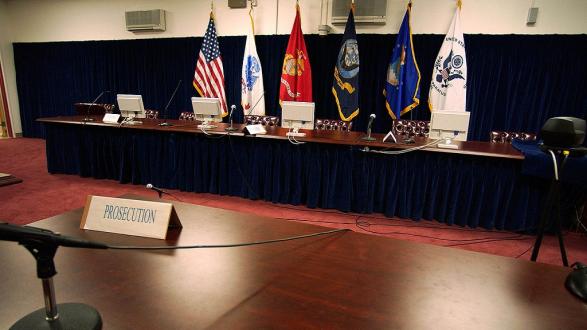 Congressman Adam Schiff (D-CA) has introduced three amendments to the FY2018 defense bill based on recommendations from the Pacific Council’s GTMO Task Force. In 2016, the Task Force published a report offering recommendations on how to fairly and transparently expedite the Guantánamo Bay military commission trials.

"I offered three amendments to the defense bill based on the work of the Pacific Council, and all three were made in order," said Schiff. "My thanks to the Council for their good work."

On July 14, 2017, H.R. 2810, the National Defense Authorization Act for Fiscal Year 2018 (NDAA) passed the House of Representatives by 344-81 votes. According to the Republican Policy Committee, the NDAA has historically been the "key mechanism through which Congress fulfills one of its primary responsibilities as mandated in Article I, Section 8 of the Constitution of the United States, which grants Congress the power to provide for the common defense; to raise and support an Army; to provide and maintain a Navy; and to make rules for the government and regulation of the land and naval forces."

His amendments were based on these three recommendations from the Pacific Council GTMO Task Force report:

The Pacific Council GTMO Task Force report’s central recommendation was to fairly and transparently expedite the Guantánamo trials by replacing the military judges presiding over the trials with sitting or retired federal judges. Skip the political impasse over trying detainees on U.S. soil, the Task Force says: take the federal judges to the island itself to move the trials forward.

"I would like to see the shutdown of the facility at Guantánamo. But as long as it exists, we’re going to have to explore more substantial changes to make it functional."

A Courthouse News article last year quoted Schiff as saying the Task Force’s recommendation has "the merit of having a judge full time in Guantánamo that can keep a close rein on the trial schedule. That may be possible for a military judge to do as well, but that has not been the case so far, so I think we should explore alternatives. It would be my hope that this would be a short-term solution in any event because I would like to see the shutdown of the facility at Guantánamo. But as long as it exists, as long as we’re making use of that process, we’re going to have to explore more substantial changes to make it functional."

Since 2013, the Pacific Council has held official NGO observer status with the Office of Military Commissions at Guantánamo Bay, Cuba, one of a select group of organizations with that designation alongside Human Rights Watch, Amnesty International, and the American Bar Association. In this role the Pacific Council sends member representatives with relevant expertise to observe select proceedings at GTMO and report back. Previous observers have attended the Military Commission hearings for 9/11 mastermind Khalid Sheikh Mohammed, Abd al-Hadi al-Iraqi, and Abd al-Rahim al-Nashiri, among others.

Members with legal expertise or other relevant background are invited to represent the Pacific Council as an official observer. Interested? Let us know: trips@pacificcouncil.org.