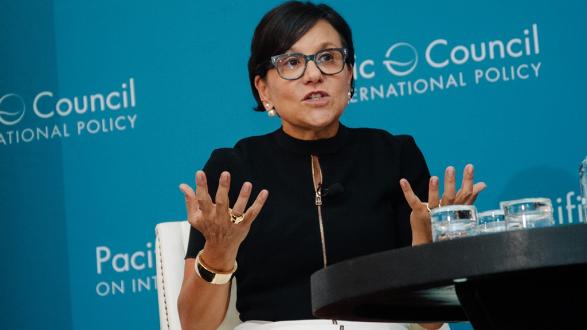 The interview was moderated by Ms. Ann M. Simmons, global development writer and editor at the Los Angeles Times.

Secretary Pritzker said the United States is entering its eighth year of expansion and listed several positive steps the U.S. economy has taken: real GDP has grown about 2.1 percent on average since 2009; 156,000 jobs were created in September 2016; hourly earnings are up about 2.8 percent in 2016; and real median household income is up over five percent between 2014-15.

However, she said overall growth remains relatively slow – 1.4 percent in the United States last quarter – because of economic slowdown around the world, including in China and the United Kingdom. The International Monetary Fund is predicting 3.4 percent global growth in 2017.

Secretary Pritzker said the United States needs to be more proactive as a country in terms of helping not only the U.S. economy but also the global economy.

"That’s why we’ve been so aggressive with not only TPP and rules-based trade, but trying to attract foreign direct investment," she said. “The United States has really led the TPP negotiation and insisted that we have high labor and environmental standards. Rules-based trade is what we’re trying to accomplish."

Secretary Pritzker touted both the economic and national security benefits to TPP, including access to new markets, free flow of information on the internet, the reduction and elimination of 18,000 tariffs, clearing bureaucratic red tape, and making it more competitive for American labor by raising labor standards in other countries.

"Rules-based trade is what we’re trying to accomplish."

"The greater the U.S. presence in the Asia-Pacific region the more impetus the United States has to be patrolling the seas or to be protecting territorial integrity. And by knitting our economies and our peoples together there’s less likely to be extremism against the United States."

Secretary Pritzker said she doesn’t think the anxiety in the United States is caused by free trade, which supports 11.6 million jobs, but rather by globalization, automation, and digitization. To alleviate those anxieties, she believes the Obama administration needs to further explain the economic and national security benefits of TPP.

"The Obama administration is absolutely committed to passing TPP in the lame duck period," she said.

If TPP is not passed, she warned, China will step in to make agreements with those countries in the Asia-Pacific. China already has a trade deal competing with TPP called the Regional Comprehensive Economic Partnership (RCEP), which Secretary Pritzker said doesn’t have the same high standards as TPP.

"Imagine you’re a leader in one of those countries, and you’ve convinced your populace that TPP is a good idea and gone ahead and proceeded," she said. "Now the United States can’t follow through for political purposes or whatever. We’ve heard several of the leaders in the Asia-Pacific region say quite explicitly, ‘Look, if you’re not in the game, we’re going to have to look to others that we can rely on who are in the Asia-Pacific region.’"

"Cybersecurity is the only domain where we ask private companies to defend themselves against foreign countries."

Secretary Pritzker spoke about the complex relationship between the United States and China, citing areas of both tension – such as the South China Sea, intellectual property protection, cybersecurity, state-owned enterprise reform, and excess steel production – and cooperation – such as the Paris agreement on climate change.

"Given that China is the number two largest economy in the world, we have to have sustained commercial engagement," she replied when Simmons asked her how the United States can strengthen its relationship with China. "We can’t ignore China; it’s not in anyone’s best interest both from a commercial standpoint and obviously from a geopolitical standpoint."

Secretary Pritzker also discussed the U.S. Department of Commerce’s efforts internationally through "commercial diplomacy," which she defined as "harnessing the United States’ unmatched commercial presence and power around the world to work together with foreign governments to change policy." The approach has been used in Africa, Tunisia, Ukraine, and Asia with positive results.

Secretary Pritzker said the U.S. regulatory and legislative structure is not set up to address the dynamic challenges of cyber security. 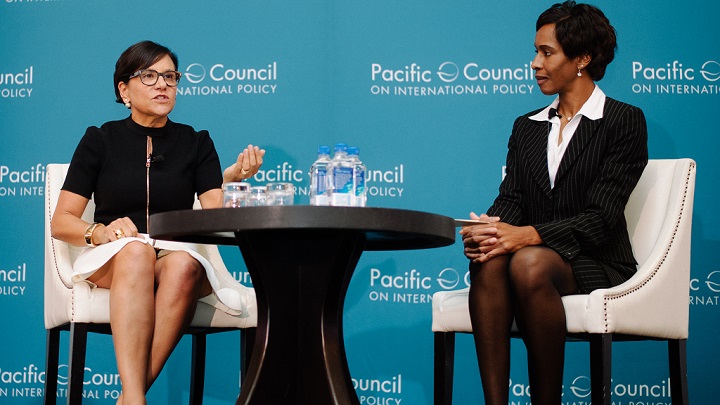 "This is a very serious challenge, and not something the government or the private sector can handle by themselves,” she said. "Cybersecurity is the only domain where we ask private companies to defend themselves against foreign countries. That’s a problem. Government should have a solemn obligation to protect our people against systemic threats to our economic and national security. That’s a fundamental premise of government."

She added that the United States needs to consider new approaches and methods to combat cyber security threats to American businesses in particular.

On the refugee crisis:

In September, Secretary Pritzker hosted the "President’s Call to Action Refugee Roundtable," a gathering of business leaders discussing how the private sector can help address the refugee crisis. Following President Obama’s call to action in June, 51 companies made commitments to aid refugees in the United States and around the world, including creating temporary housing to host refugee families, starting a microloan program to help refugees start businesses, donating mental health support and healthcare products to doctors treating refugees, and providing resources that will support education and opportunities for refugee youth resettled in the United States.

"Companies such as Airbnb, Chobani, and Western Union didn’t just put up money, they also leveraged their corporate assets," said Secretary Pritzker. "There was a wide variety of companies that participated and made pledges to support the refugee population. One thing that’s been really heartening in this administration is the amount of partnership from corporate America that we’ve seen in issues like the refugee crisis and so many different areas."

"Politically, that’s very hard to do, but it’s probably more consistent morally with who we think we are than the number of refugees we’re actually taking," she said.

Before Members Weekend, Secretary Pritzker contributed an op-ed on why the time is now to pass the Trans-Pacific Partnership. Read it here.