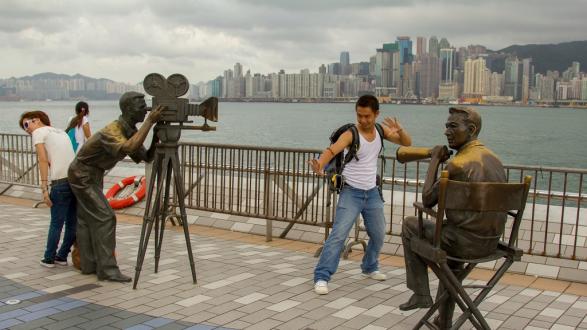 Two recent Chinese movies, Wolf Warrior 2 and Operation Red Sea, swept the country’s box office and became phenomenons on social media. Both of them have patriotic plots, pay tribute to the nation’s military force and global stature, and have become the highest-grossing movies in China.

They are part of a national trend seen in the last three years of promoting patriotic films in the communist country with the goal of strengthening China’s soft power, giving unprecedented importance to domestic voices rather than international opinion.

In 2016, the debut of the movie Operation Mekong, which is based on China’s anti-narcotics operation following a massacre that killed 13 Chinese sailors on the Mekong River, marked the beginning of a patriotic hero movie rush in China. The film’s tagline, "You live a sound life because someone [referring to Chinese soldiers and police] shoulders hardships for you," was frequently referenced on social media.

These movies, whether privately or state funded, are part of the government’s efforts to win domestic support from the public and the media.

In 2017, Wolf Warrior 2 grossed more than $874 million and broke the all-time Chinese box office record, followed by Operation Red Sea, which is 2018’s highest-grossing movie in China and ninth in the world, according to Beijing-based film research firm EntGroup. Also in 2018, Amazing China, a documentary displaying China’s accomplishments in economics, technology, and welfare development since President Xi Jinping took power, became the most popular Chinese documentary in history.

These movies are part of the government’s efforts to win domestic support from the public and the media. During Wolf Warrior 2's release, state agencies and public schools across the country were organized to attend movie screenings. Students were required to write down their impressions as homework of a "patriotic education."

The phrase "soft power," as American political scientist Joseph Nye theorized in the 1990s, refers to a country's use of culture to influence foreign opinion in a positive way. Hollywood movies, for example, disseminate American values and its democratic system to the world as a soft power tool.

When seeing the aforementioned movies in a theater, it’s not difficult to comprehend the messages the Chinese government is trying to send to its citizens.

However, China’s soft power has a different target. Unlike the United States and many western countries, "China’s soft power is domestically focused," said Stanley Rosen, a professor at the University of Southern California specializing in Chinese politics and society. "It’s all about how Chinese citizens think of the country."

Professor Jay Wang, director of USC’s Center on Public Diplomacy, explained the reason as a combination of China’s political strategy and current social tendencies. On the one hand, political and social stability rank top and foremost in the Communist Party’s ruling principles of the country. On the other hand, "public opinion in China is becoming more important now," as social media gave Chinese people "vehicles and venues to voice their views domestically and internationally," said Wang.

It is clear to see what messages the Chinese government is trying to send to its citizens through the country's recent popular films.

Most of the films are set in foreign areas such as Africa and Southeast Asia. By showing China’s successful operations overseas, a key point is being reiterated: China has the power and resolution to protect its citizens in any corner of the world.

Although most of the films take place abroad in such regions as Africa and Southeast Asia, the movies’ major characters are often members of the Chinese army and police, representing Chinese authority. By showing China’s successful operations overseas, a key point is being emphasized: China has the power and resolution to protect its citizens in any corner of the world.

For example, in Operation Red Sea, which was adapted from the real story of the evacuation of Chinese citizens during the 2015 Yemen Civil War, the People’s Liberation Army calls out its most elite special forces and uses top-notch weapons and a naval fleet to bring 130 Chinese citizens home. The United States is compared with China in Wolf Warrior 2: while the Chinese Embassy is sheltering Chinese and foreign nationals during the war, the U.S. Embassy is closed and not taking its citizens back.

Another argument these movies make is that China is determined to defeat any invasions of its territory, catering to a deep-rooted nationalist sentiment in most Chinese people. This stems from two centuries of humiliation in Chinese modern history, when China was colonized by foreign powers such as the British and Japan.

However, despite the unprecedented success of the new model, experts are still not optimistic about the long-term popularity and effectiveness of the movie soft power strategy.

However, despite the unprecedented success of the new model, experts are still not optimistic about the long-term popularity and effectiveness of China's soft power strategy. "There haven’t been many movies like Wolf Warrior 2 in the past years," said Rosen. "There’s a possibility that Chinese people will get bored of this type of movie, like what happened to martial arts action thrillers."

Wang said the core values of soft power eventually rely on an advanced societal infrastructure that allows citizens to participate in public affairs and policy, which "will be a very long process in China."

Dongyao Nie is a reporter and graduate student at USC Annenberg Journalism School. Her work primarily covers politics, foreign relations, and social issues in East Asia. She is participating in a foreign affairs reporting class taught by Professor Phil Seib, a collaboration between the Pacific Council and the Annenberg School of Communication and Journalism.