Past Due: Time to Reinvest in U.S.-Turkey Public Diplomacy 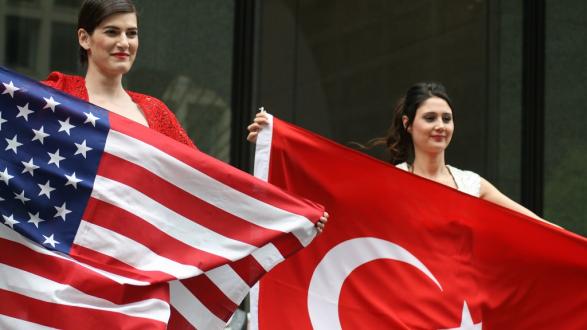 By:
Senem B. Çevik

These articles do have a valid point: in the past few years, the U.S.-Turkey relationship has fallen apart dramatically. However, the articles almost unanimously neglect to mention the consequences of this growing gap, which include the crippling influence of Russia’s information operations and the Chinese investment in Turkey, a long-time member of NATO.

So, the right question to ask instead should be, “How can U.S.-Turkey relations be salvaged at the public level?” Many commentators overlook the potential of public diplomacy in bridging this current gap and the vacuum created by the shortage of people to people engagement. During volatile times, countries need to strengthen ties binding them together, rather than weaken them. Public diplomacy can indeed help improve U.S.-Turkey relations on the societal level by investing in the people of both countries.

The fundamental skill of public diplomacy is listening to what is deficient on both sides of U.S.-Turkey relations. Engaging a foreign audience by listening is the first step in collecting and analyzing data to shape policy. It certainly does not mean to agree with each other, but it helps to understand both perspectives.

The United States and Turkey have key disagreements on foreign policy and do not see eye to eye on their security priorities.

To be sure, the United States and Turkey have key disagreements on foreign policy and do not see eye to eye on their security priorities. Amongst the mounting issues on the Turkish side is the United States’ support of the Kurdish militia People’s Protection Units (YPG) in northern Syria, which has deep rooted ties with the PKK, a designated terrorist organization by Turkey and the United States.

Furthermore, his extended residency in the United States is giving way to a plethora of conspiracy theories about there being U.S. support to topple the Turkish government by way of a military coup and economic crisis. U.S. authorities have not responded so far to Turkey’s requests. Turkey’s decision to purchase Russian S-400 missiles to diversify its defense system was the last straw in bilateral relations and resulted in Turkeys expulsion from the F-35 program.

These issues are all perceived as existential problems by Turkey. Conversely, the United States has its own security concerns on their agenda. The war on ISIS in northern Syria is one of the priorities for the United States in the Middle East. The imprisonment of the American pastor Andrew Brunson for two years on charges related to terrorism caused uproar in the United States and shed further light on Turkey’s democratic deficiency.

Disagreements between the U.S. and Turkish administrations have produced unfavorable media coverage of both countries in their respective states. Ineffective listening between American and Turkish policy makers are contributing to this fall out.

Furthermore, the increasingly hostile rhetoric of Turkish President Recep Tayyip Erdoğan and several others from the political elite have been exacerbating the already fragmented relations between these two countries. The recent crisis about Turkey’s purchase of Russian missiles has created major concern in the United States given Russia’s aggressive policies in respect to NATO alliance and its other efforts to undermine liberal democracies.

Disagreements between the U.S. and Turkish administrations have produced unfavorable media coverage of both countries in their respective states. Moreover, according to recent Pew Research, Turkey has consecutively become top of the list of the most anti-American countries. At the same time, public opinion polls indicate that the majority of Turkish citizens prefer to remain within NATO and the Western alliance. Thus, ineffective listening between American and Turkish policy makers are contributing to this fall out.

American and Turkish policy makers should be able to listen to each other, understand where the grievances are coming from, and then form policy afterwards. Professor of public diplomacy Nicholas J. Cull, in his latest book, argues that credibility in listening comes from the perceived responsiveness of the listener to what is being heard. Through mutual listening both actors can rebuild trust.

Sending and receiving citizens from overseas has traditionally been utilized as a means to engage with foreign audiences. The merits of educational and cultural exchanges are frequently underestimated as costly and time-consuming investments. Indeed, it takes decades to see the results of educational exchanges, as well as the significant amounts of human resources and funding for cultural exchanges. Both are essentially long-term investments that require commitment, patience, and strategy and they can be quite powerful in building bridges between cultures and in encouraging dialogue.

The vacuum created by U.S.-based programs and hesitancy of university to develop study abroad programs will only accelerate the deterioration of relations between peoples.

Exchange programs are a way to provide an environment for mutual learning and cultural understanding while being immersed in a host culture, the goal of these programs is to open up new perspectives for participants, as well as their hosts, and facilitate the exchange of knowledge and culture. The same holds true for international students who are immersing themselves in the host culture, and upon their return, taking their shared experiences back to their home countries. Such exchanges between peoples can prove beneficial particularly when relations on the diplomatic front are suffering.

The problematic relationship between the United States and Turkey has impacted educational exchanges following the 2016 coup attempt in Turkey. Several State Department exchange programs and university exchange programs were suspended citing security concerns in their reasoning. For example, the U.S. flagship exchange program Fulbright was suspended for one academic year and the University of California and California State University suspended their study abroad programs in Turkey for the 2016-2017 academic year, and furthermore, American universities have been hesitant in signing MOU’s with their Turkish counterparts.

Additionally, the Critical Language Scholarship (CLS), another flagship language program by the State Department, suspended its summer sessions in Turkey and relocated to Baku, Azerbaijan. The void in short-term exchanges programs that normally take place in Turkey are primarily being filled by Turkish programs such as the Yunus Emre Institute Turkish Summer School, the Turken Foundation Youth Bridges Program, and the Turkish Heritage Organization (THO) summer research program. In addition, numerous private universities in Istanbul offer summer schools for international students.

These existing short-term exchange programs allow American students who are learning Turkish, a State Department designated critical language, to immerse themselves in the Turkish culture. These programs allow American students to truly become experts of Turkey by experiencing the culture and language first-hand and transferring those skills back home in the United States. In turn, as more Americans visit Turkey, the Turkish public will have better access to the diversity of the American culture. The vacuum created by U.S.-based programs and hesitancy of university to develop study abroad programs will only accelerate the deterioration of relations between peoples.

The United States and Turkey should both re-invest in their exchange programs in order to ensure an uninterrupted people-to-people dialogue can continue.

Cultural exchanges, or in other words, cultural relations, are able to foster mutual learning by engaging with foreign publics on the basis of culture. Cultural exchanges cement relations with allies and build new bridges with less familiar cultures by exposing them to each other’s culture. It is unrealistic to think that cultural exchanges will change policy, but, when it is time for countries to mend ties on the political level, at least the societies will be ready to support that decision. Therefore, it is imperative to sustain people-to-people communication to ensure mutual understanding.

Turkey has a relatively new, but very active, cultural institute in the United States that is developing projects that connect Americans with Turkish culture. This cultural institute, known as Yunus Emre Cultural Institute, has projects such as Turkish Coffee Happy Hour, language courses, film screenings, cooking classes, calligraphy workshops, and a variety of other cultural events. Yunus Emre Cultural Institute not only introduces the Turkish culture to Americans, it also serves as a facilitator in introducing the Turkish culture to non-American international students based in the East Coast which can have a multiplier effect.

If the United States is concerned about Turkey’s growing friendship with Russia and China—as it should be—it is time to reinvest in public diplomacy, ensure there is mutual listening, and increase educational and cultural exchanges.

However, these events cannot always reach across the United States given logistical and financial constraints. This is where Turkish-Americans and non-state actors come into picture in providing a window into the Turkish culture. Various Turkish Cultural Festivals like the New York Turkish Day Parade and Festival, the D.C. Turkish Festival, and film festivals across the United States are other avenues to sustain cultural ties.

On the other side of the coin, the United States does not enjoy the advantages of a cultural institute and activities are presumed under various State Department programs or embassies. For example, jazz orchestras tour Turkey and the U.S. embassy co-sponsors jazz festivals in Turkey. This shortage of institutional support does not help the United States battle the unfavorable public opinion held in Turkey and creates a vacuum in cultural exchanges.

Despite the sour relations, Turkey is still a NATO ally and is currently being swayed by authoritarian states like Russia and China, and America’s lack of engagement with Turkey will further escalate its sway towards Russia and China. If the United States is concerned about Turkey’s growing friendship with Russia and China—as it should be—it is time to reinvest in public diplomacy, ensure there is mutual listening, and increase educational and cultural exchanges. The shifting alliances across the globe are a reminder for the United States to pay attention to its public diplomacy toolkit before the fall out with Turkey becomes acute.

Senem Çevik is a Pacific Council member and a lecturer at UC Irvine’s International Studies Program.