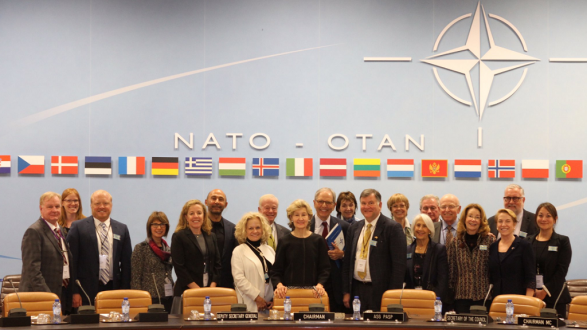 While Angelenos suffered through a late October heat wave, a delegation of Pacific Council members, bundled in winter-wear, crossed a cobblestone street 5,600 miles away and approached the glass doors of the European Parliament. It was the first day of a weeklong delegation in two important European cities, Brussels and The Hague, where international decision-makers hold the seats of power and determine policies that affect more than 500 million residents.

The past year has been turbulent for Europe, which reeled in post-Brexit shock while wearily eyeing its eastern neighbor, Russia, as it flexed its muscles in the "Zapad 2017" military exercise. Furthermore, during his presidential campaign, Donald Trump questioned the importance of the North Atlantic Treaty Organization (NATO), an alliance that relies on American leadership.

The time was ripe for a Pacific Council delegation to Brussels, headquarters of the European Union and NATO, to explore issues such as Europe-Russia relations, immigration and the refugee crisis, U.S.-NATO relations, and counter-terror efforts. The delegation also visited The Hague, known as the "international city of peace and justice," to meet with the highest ranks of the International Criminal Court (ICC) and the Permanent Court of Arbitration (PCA).

This fall’s Pacific Council delegation consisted of professionals across industries including law, finance, entertainment, real estate, and natural resources. The diversity of perspectives contributed to new angles in conversations with speakers, all of whom grasped the importance of the U.S. West Coast in global affairs.

Below are highlights of information gleaned on the trip through discussions with leadership from organizations in Brussels and The Hague (see below for a full list of speakers), plus insights from delegates.

Delegate Takeaway: NATO’s members have concerns about Trump’s "America First" priority and what this means for Europe’s status quo. However, early signs indicate a disconnect between populist messaging and policy-as-actually-implemented. In reality, U.S. support for NATO has recently increased as indicated by a larger military presence and greater funding.

Delegate Takeaway: What stood out and resonated strongly with me is the deep concern felt by the leaders at NATO about the way Russia under Putin is attempting to project power and influence and reshape the post-WWII security order. It was refreshing and somewhat reassuring to hear analysis from thoughtful, experienced, well-informed leaders, who have a stake in maintaining peace and safety around the world.

The Netherlands’ Leadership in Water Management

Delegate Takeaway: It is not surprising that the IHE Delft Institute for Water Education is located here in such a hydro-modified coastal environment. The school's alumni are everywhere, with a big concentration in Bangladesh and many other coastal floodplains—in fact, they were in our Mississippi Delta helping with solutions after Hurricane Katrina.

Select speakers during the delegation to Brussels and The Hague: