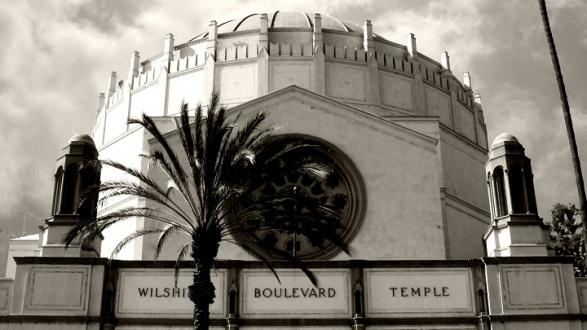 The processes of spiritual seeking, discovering, and creating are constantly shaping and reshaping the religious landscape of Los Angeles. Far from being a godless metropolis, Los Angeles is one of the most religiously diverse and pluralistic cities in the world. Just about every religion and denomination that exists can be found in L.A., and a number of fascinating (and even controversial) religious movements began here.

Just about every religion and denomination that exists can be found in L.A.

For example, within a mile of MacArthur Park, you can find dozens of religion-infused sites across a wide spectrum of belief, from Korean Pentecostal storefront churches, to botanicas selling products that blend folk and Catholic beliefs, and several Vietnamese Buddhist temples. What’s more, 53 percent of L.A. County’s population regularly participates in some form of organized congregational life, much higher than San Francisco’s 35 percent and New York’s 44 percent. All told, there are almost 10,000 congregations in the County, and that number continues to grow.

Religion has always coursed through the veins of the City of Angels. Tongva villages and ceremonial sites thrived near steady water sources for centuries, and the area’s earliest European settlements were rooted in religion, with the founding of the San Gabriel Mission by Franciscan monks in 1771. And Angelenos have been remarkably innovative. American Pentecostalism was born L.A. in 1906 in a small interracial church on Azusa Street in what is now Little Tokyo. Paramahansa Yogananda founded the Self-Realization Fellowship here in 1920 and taught Kriya Yoga long before yoga pants became the uniform of suburban leisure.

This rich religious landscape is in constant motion, mixing some spiritual groups and creating layers of history as other groups rise or fall, move up or move on, and move in or move out of buildings and neighborhoods. Sephardic Temple Tifereth Israel was a Jewish congregation founded 100 years ago on what is now Martin Luther King Jr. Blvd. Currently, it is Greater New Vision Missionary Baptist Church, an African-American church surrounded by an increasingly Latino neighborhood. In the case of the Pico-Union Project, a former synagogue built in 1909 was eventually acquired by the Welsh Presbyterian Church, only to be bought once again by a Jewish organization and rehabbed as a center for Jewish spirituality, interfaith engagement and the arts, while also hosting two different Asian church groups each week.

Walk less than two miles along Wilshire Boulevard in Mid City and you’ll pass ornate European-inspired churches that are nearly a century old along with commercial properties in strip malls that have been reshaped into sacred religious spaces. Duck down the side streets to find old homes converted into houses of prayer, meditation, and worship. In this area, a non-denominational evangelical church recently bought an historic building that once housed a mainline Christian congregation, and a former insurance company is now a mosque with a Buddhist temple just behind it. The neighborhood is also home to one of the world’s largest pipe organs (at the First Congregationalist Church) as well as a Catholic Priest who rides a Harley.

And all of these movements and organizations flourish side-by-side in a degree of harmony that is rare or even unheard-of in other parts of the world. The occasional crisis, like the 1992 civil unrest, has prompted diverse groups to extend the olive branch and build bridges, even when these relationships are challenging.

All of these movements and organizations flourish side-by-side in a degree of harmony that is rare or even unheard-of in other parts of the world.

Religious tensions, like political rows, can stretch neighborly goodwill pretty thin. So too can fights over zoning and traffic. After all, in L.A. the Holy Grail might be spiritual enlightenment, or just a primo parking space.

Brie Jeanette Loskota is a Pacific Council member and the managing director of the Center for Religion and Civic Culture at the University of Southern California.