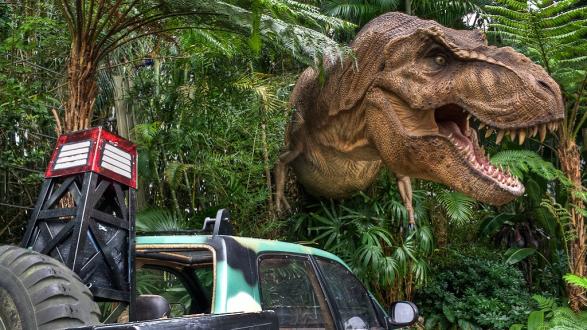 On Friday, August 16, a group of Pacific Council members and their friends and families attended a screening of “Jurassic Park” at the Hollywood Bowl, where the LA Philharmonic played a live score to accompany the film. Let’s explore how “Jurassic Park” may be related to international policy.

With two sequels and the spin-off series “Jurassic World,” the “Jurassic Park” franchise has become a cultural phenomenon. The original movie, “Jurassic Park,” released in 1993, was directed by Steven Spielberg and was based on a novel by the same name from author Michael Crichton. At first glance, this movie is simply a fun sci-fi adventure movie. But if you dig a little deeper, you might find that the story provides commentary on real-life global issues.

On a larger scale, “Jurassic Park” may serve as a lesson about unintended consequences. Foreign policy needs to be navigated carefully, since every action the United States takes, just like every intervention USAID or the UN implements, will result in unforeseen outcomes.

“Jurassic Park” centers around a wealthy CEO who creates an amusement park on an island filled with dinosaurs recreated using bioengineering technology. In order to test the park’s safety, a group of paleontologists, mathematicians, and other consultants are invited to tour the park alongside the CEO and his grandchildren.

Dr. Ian Malcolm, a character created by author Michael Crichton, is a mathematician who studies chaos theory—which, in layman’s terms, describes why even deterministic systems cannot be predictable. In other words, even the best planned interventions (like a dinosaur amusement park, for example) are prone to unpredictability and unintended consequences. In “Jurassic Park,” these consequences are not easily overlooked (spoiler: the dinosaurs break loose) but in real life, sometimes the consequences are harder to see.

“Jurassic Park” explores an obvious theme of bioengineering and advanced technology. Cloning dinosaurs from ancient DNA may seem like a stretch, but during the Green Revolution of the 1960s, three decades before this movie was released, the world was already engaged in creating a kind of “Jurassic Park” of its own. At the time, scientists were experimenting with plant DNA to create crops that could be larger, drought-resistant, or immune to certain diseases. Now, in the 2010s and in the midst of a second Green Revolution, genetically modified crops are widespread across the world.

Some viewers interpret “Jurassic Park” as a warning to those who are considering interfering with nature in the form of bioengineering or genetic modification. The arguments for or against genetically modified crops aside, the one thing we know for certain is that an intervention of this sort will have a huge impact on our environment and social systems, for better or for worse.

On a larger scale, “Jurassic Park” may serve as a lesson about unintended consequences. Foreign policy needs to be navigated carefully, since every action the United States takes, just like every intervention USAID or the UN implements, will result in unforeseen outcomes. Some of these outcomes will be positive, others may be harmful, but policy needs to be well thought-out and seriously considered before passed into action—unless, of course, we want the world to be overrun by dinosaurs.