Kevin Rudd: 2017 is the Year of Living Dangerously 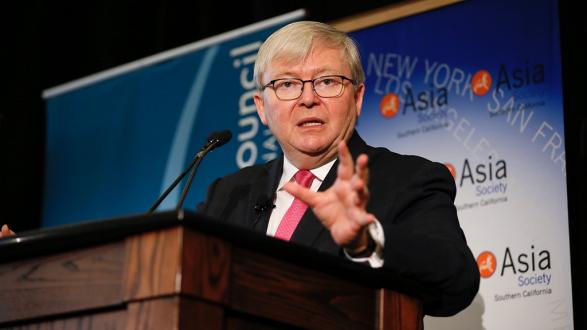 The United States and the international community will have to "live dangerously" in 2017, former Australian prime minister Kevin Rudd told Pacific Council and Asia Society members during a discussion about the challenges facing Asia and the United States within the currently shifting global order.

Rudd is the current president of the Asia Society Policy Institute. Following his opening remarks, Rudd continued the discussion with the Honorable Mickey Kantor, a Pacific Council director and former U.S. secretary of commerce and trade representative. This event was presented in partnership with the Asia Society Southern California.

"We seem to have an extraordinary confluence of risk, uncertainty, and change at multiple levels occurring simultaneously, therefore testing policymakers and political leaders in a manner that is beyond normal," said Rudd. "One of those uncertainties is the United States itself."

Watch the full video below, courtesy of the Asia Society:

Rudd said that every government around the world is asking, "What will Trump’s election mean in terms of policy? We understand what happened in the presidential election in terms of this groundswell in forgotten America, and where the president’s convictions seem to lie by statements he has made, but how will all of that translate into actual policy?"

Rudd sees U.S.-China and U.S.-Russia relations as the two major areas of concern in the international community.

"What will happen in the process of U.S.-Russia normalization, if that’s what we can call it?" said Rudd. "Ukraine, Syria, and sanctions are the three main issues there. When you actually unpack each of those, there is a formidable degree of difficulty and complexity in achieving what many expect to be a path toward normalization. One of the uncertainties that we need to anticipate is the fact that U.S.-Russia relations may not normalize to the extent that people might expect, due to factors beyond the control of President Trump."

"One of the uncertainties that we need to anticipate is the fact that U.S.-Russia relations may not normalize to the extent that people might expect."

On U.S.-China relations, Rudd said the Trump administration would be wise to support the "One China" policy.

"Once they get that issue out of the way, I think our friends in Beijing are pragmatic enough to have an open conversation and negotiation about trade, investment, the South China Sea, and North Korea," said Rudd.

He added that President Trump’s critiques of China are led primarily by his domestic agenda, in terms of China "stealing" American jobs and industry.

"There are significant elements of truth in the critique, and this will be a hard message for our friends in Beijing to hear," said Rudd. "On trade, investment, currency, and the restrictions behind the border in China on these issues, there is a deep criticism in the United States toward China. Parallel to that in the U.S.-China relationship is what will then happen on outstanding national security issues in the South China Sea and North Korea."

According to Rudd, by any objective measure the calculation of the national security policy establishment in the United States and its allies is that North Korea’s nuclear program is that the single greatest objective threat to security in the year 2017.

"It’s a technical question, not a policy question," said Rudd, referring to the fact that North Korea already has nuclear capabilities. "It’s a technical calculation about how many bombs do they have? What’s their missile range and accuracy? Can their weapons be neutralized? Does the world accept a nuclear-armed and capable North Korea as a responsible member of the global nuclear club or not? If not, what can be done about it? That is the absolute essence of the discussion which must now be conducted between the Trump and Xi administrations."

"Does the world accept a nuclear armed and capable North Korea as a responsible member of the global nuclear club or not? If not, what can be done about it?"

On the subject of multilateral organizations, Rudd said it remains to be seen how the Trump administration will interact with the international community.

"With the United Nations, we still don’t know," said Rudd. "Trump’s statements about the UN so far have not been on the positive side. But this is America’s child. If you walk away from it, a large part of your global soft power goes with it."

Rudd spent the last two years chairing the Independent Commission on Multilateralism, established by the International Peace Institute in September 2014 to study the future of the UN. The commission published their findings in December, and Rudd authored an op-ed on how to reform the UN, of which he is a major advocate.

"The United Nations is America’s child. If you walk away from it, a large part of your global soft power goes with it."

Rudd also considered the future of the democratic project in light of the past year’s trend of populism around the world, including the growing sentiment against free trade and globalization.

"Our collective democratic project is under deep challenge," said Rudd. "I say to our American friends, ‘The way you conduct your democracy domestically has deep global resonance.’ People watch. If America engages in retreat and retrenchism, and if its own democracy becomes fouled through this acute adversarialism in Congress, before you even add the other deep cancers within the system in terms of campaign finance and redistricting, these messages go beyond U.S. borders."

Rudd concluded that there are reasons to be concerned about the shifting global order in 2017, but that western values are still worth fighting for.

"What happens to the democracy if and when President Trump’s constituency concludes that he has no solutions to the dislocations of globalization, in the economy, in employment, because of the onward march of technology and capital?" Rudd wondered. "Do you then have such a deep and fundamental breach with the validity of the democratic project that they just look elsewhere? We’re not there yet, but when you start to see people look outside the center-left/center-right mainstream of politics for radical alternatives, then I think we’re on something of a slippery slope. If we think democracy is a political system worth defending, we must tend the garden well."