The Impact of Oil on Global Economics and Security 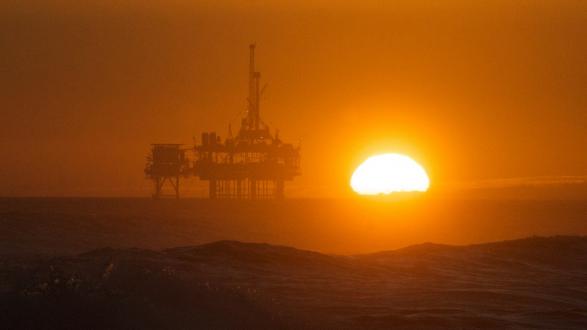 The following is an advance reading for the Spring Conference 2016 discussion Grasping the Global Energy Future: Challenges and Solutions.
____________________

Economic activity moves on a pool of oil and natural gas. The daily consumption of crude oil is about 95 million barrels per day, with the United States using about 19 million barrels per day, or about 20%. Before 1973, the domestic U.S. producing capabilities, supplemented with Canada and Mexico’s excess capacity, were sufficient to make the U.S. energy independent—more or less.

Since 1973, every U.S. president and contender for that office professed to have a plan to make the country energy independent again. Until North America implemented “fracking” on a large scale, energy independence was a hollow promise that no one in the energy industry took seriously. This has changed and the implications are significant.

Before thinking about the future, there is much to learn from the past five decades. The general explanation is that world petroleum has mostly tracked global consumption. The exceptions have mostly been political, and the economic effects were often staggering on a global basis. 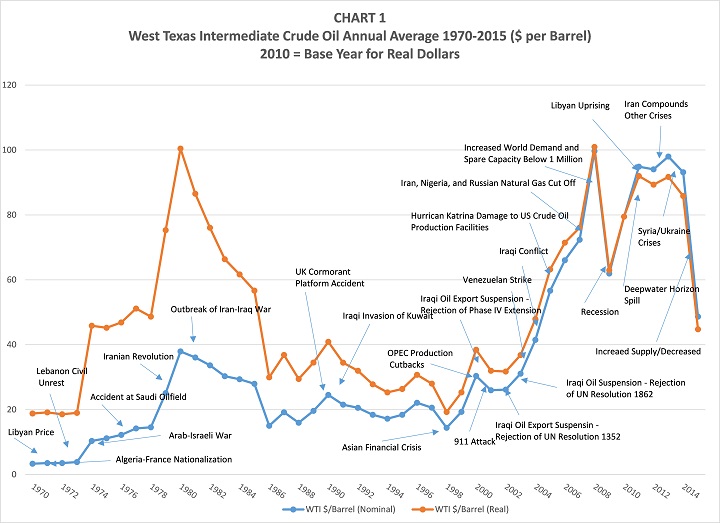 Major disruptions in crude oil supply, unless sufficiently off-set with existing spare capacity, caused significant price surges, which shocked motorists, triggered recessions, and changed politics. The most important region in all of this is the Middle East, and particularly the Persian Gulf. Like Willy Sutton’s explanation that he robbed banks because it’s where the money was, the Middle East is rich with petroleum. Wars, unrest, and politics erupting in that region have caused major disruptions in global economic activity. The reasons are many, but a crucial fact is that, until recently, the world’s “spare capacity” that could make or break supply disruptions was mostly in one country: Saudi Arabia.

Until North America implemented “fracking” on a large scale, energy independence was a hollow promise that no one in the energy industry took seriously.

The industry responded with deeper unconventional drilling, particularly offshore, converting oil sands and shale to liquid crude, and expanding fracking. With prices at about $100 per barrel, these unconventional sources were capable of filling any nascent gap between the world’s growing demand and a combination of conventional and unconventional supply.

Things changed when crude prices fell to $30 per barrel or less. Uncertainty rattles global security prices. Investments in unconventional petroleum are delayed or abandoned. However, new technologies that increase efficiency and reduce demand somewhat surprisingly continue to add new consumer choices, which are selling. The biggest driving factors are declining demands and more conventional supplies from the Middle East.

Presidential politics matter in the United States. The current administration has lifted an export ban on crude oil that has been in effect since the 1970s. President Obama continues to push back on the use of abundant coal, supports restrictions on offshore drilling, and restrains pipelines that would bring in more Canadian petroleum supplies to the United States.

Crude oil prices are recovering a bit, to about $40 per barrel. This is a presidential election year, after all.

One party is offering a “greener” path. Low pump prices and no shortages of supply make it easy to say “no” to policies that would increase petroleum production to make us energy independent—at least on a similar North American basis, as we experienced before the early 1970s. This party also emphasizes jobs in the energy efficiency and renewable energy sectors.

The other party focuses on the significant loss of jobs in the more traditional energy sectors, particularly coal and fracking. This party emphasizes significant job losses in swing states, which will increase unemployment both directly and indirectly across the country. They also discuss that, as an added benefit of energy independence, the United States could more readily encourage other consuming nations to do more to reduce regional conflicts in the Middle East.

No one has perfect future vision. There are many moving parts in play, and much is at stake. A sober discussion awaits those that participate in the Pacific Council’s upcoming Spring Conference on April 15.

Dr. Charles Cicchetti is a member of Pacific Economics Group and a former Professor of Economics at the University of Southern California.

Share your own opinion on social media ahead of Spring Conference 2016: how can the United States grasp the global energy future? Tweet at us @PacCouncil: you can follow along and join the conversation on April 15 using #SpringCon16.