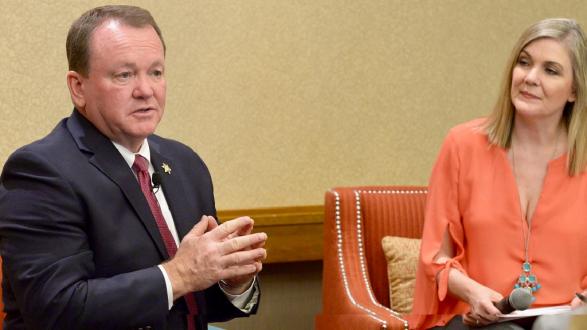 "Los Angeles is truly the most international city in the world," said McDonnell. "There are 32 countries whose population is the highest in Los Angeles than anywhere other than the capital of their country. When something happens anywhere else in the world, there’s a direct connection with Los Angeles."

He added that the LA County Sheriff’s Department is the largest in the world with approximately 18,000 employees (including 9,500 sworn deputies) serving 10 million residents throughout the county, with the responsibility to secure 18,000 inmates on any given day. Its International Liaison Unit utilizes "police diplomacy" to connect with police agencies around the world, exchange resources, training, and experience between nations, offer support to over 110 embassies and consulates and notify them of the arrests and deaths of foreign nationals within LA County, follow protocols of consular notification and diplomatic immunity, and provide multilingual interpreter services.

"We as law enforcement officers have to have a certain sensitivity and awareness in LA because there are so many different cultures and languages and traditions," he said, adding that the most critical element in community policing is trust.

"So many people who live in Los Angeles came from countries where the police are brutal or corrupt or worse in some cases. We have to overcome their perception of police to be able to show that we’re different and we’re here to help you."

"Trust is our currency," he said. "If we don’t have that, we don’t have anything else. So many people who live in Los Angeles came from countries where the police are brutal or corrupt or worse in some cases. We have to overcome what they bring to the table with regards to that perception of police to be able to show that we’re different and we’re here to help you. We want them to know that we’re approachable and that we’re here for their children. That’s a heavy lift in some cases because of that element of distrust, including distrust in our own history in terms of policing in America. We have to own that and have a game plan for moving forward."

"When you stretch our personnel across all of those specialties, I look at the sheriff’s department as one of the country’s best public safety investments and one of the best deals for the taxpayers because we get so much out of our people for the money we spend," said McDonnell.

"Law enforcement agencies from around the world come to L.A. to learn from us. We learn from them, too. This makes us a leader on the world stage."

"There is so much going on with regards to the counterterrorism front that you’ll never hear about, by design," he said. "The world has become so much smaller because of the internet and the ability to travel. There are transnational gangs and criminal organizations that we see connecting with the existing gang network here in Los Angeles on a daily basis. We’re dealing with all of this as if it were a multinational conglomerate. It is that sophisticated now on the criminal side and it’s only going to become more so as we move forward. So we have to be plugged in internationally with our partners around the world, not only in the criminal justice or policing context, but in the intelligence community as well."

He added that when a terror attack happens elsewhere, the sheriff’s department works with their national and international partners to ensure that there is no local connection or threat in L.A.

"Law enforcement agencies from around the world come to LA to learn from us," he said. "We learn from them, too. This makes us a leader on the world stage."

"When it comes to cybersecurity, we’re nowhere near where we want to be at the local, state, or national level."

Some of the high-profile issues with international relevance that the sheriff’s department works on include sex and labor trafficking, cybersecurity, and immigration.

"In sex trafficking cases, we rescue the victim—usually young girls—and get them services and back in school, then we go after the pimps, traffickers, and demand side with everything we’ve got," he said. "When it comes to cybersecurity, we’re nowhere near where we want to be at the local, state, or national level. And with regards to immigration, we have to work with ICE on some things: the ports, sex trafficking, and other issues. We try to strike the balance between public safety and public trust when it comes to immigration."