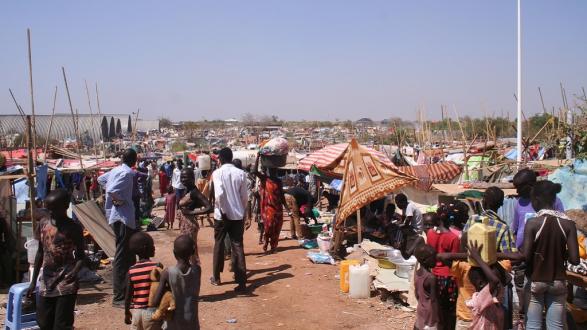 This week, U.S. Ambassador to the UN Nikki Haley is evacuated from South Sudan due to protests; Xi Jinping solidifies his power during the 19th Communist Party Congress; Spain and Iraq move to suppress Catalonia’s and Kurdistan’s independence movements; and more.

A day after the governors-elect from one of Venezuela’s opposition parties were sworn in by President Nicolás Maduro’s Constituent Assembly, opposition leader Henrique Capriles threatened to break the almost 10-year-old alliance of opposition parties, calling it a "tumor." Tensions within the alliance came to a head following Venezuela’s October 15 election, which saw the ruling party win 18 of 23 races despite polls predicting a win for the opposition. Divisions over whether to boycott or participate in the election had divided the opposition and its supporters before the vote, and the decision on the part of some members to attend the Constituent Assembly ceremony, created by Maduro, further alienated opposition members from each other.

U.S. Secretary of State Rex Tillerson met with Indian Prime Minister Narendra Modi Wednesday to discuss U.S.-India relations, terrorism in Pakistan, and India’s role in brokering peace in Afghanistan. In the meeting, Tillerson promised to help India strengthen its military capability and offered technology including F-16 and F-18 fighter jets to the country, which he referred to as a "leading power" in the region integral to providing stability and security. Read more about this story in our Newsroom.

China’s 19th Communist Party Congress solidified President Xi Jinping’s power and, for the first time in years, did not produce a successor in its appointments to the new Politburo Standing Committee. Xi was voted in for another five years and had his name and political ideology incorporated into the constitution, an unprecedented honor belonging only to Xi and Mao Zedong. The issue of whether the party would include his "New Era" thought in the constitution was widely viewed by observers as a test of Xi’s power.

After Catalonia's parliament declared independence Friday, Spain vowed to impose direct control of the region, including its local government and public schools. Catalonian President Carles Puigdemont is expected to be arrested, and any lawmakers who voted for independence could be charged with sedition or rebellion. Spain's interior minister is finalizing plans to purge pro-independence police officers in Catalonia’s Mossos d’Esquadra units following the Spanish government’s invocation of Article 155, a constitutional provision authorizing suspension of the region’s autonomy. Puigdemont had halted the region’s declaration of independence to seek negotiations with Madrid, but on Wednesday Catalonian Vice President Oriol Junqueras announced that Catalonia will proceed to build a "new republic," and that Spain has given it “no choice” but to declare independence.

The Kurdish Regional Government (KRG) in Iraq has offered to "freeze" the result of September’s independence referendum to open dialouge with Baghdad. The Iraqi government’s recent military operation to retake disputed areas seized by the Kurdish Peshmerga during clashes with ISIL resulted in dozens of deaths and prompted the KRG to call for a ceasefire, arguing that both sides were "obliged to act responsibly" despite tensions between Baghdad and Erbil. Iraqi Prime Minister Haider al-Abadi has yet to respond.

U.S. Ambassador to New Zealand and Samoa Scott Brown is under investigation by the State Department after attendees at a July Peace Corps event in the Samoan capital of Apia complained that he acted inappropriately. Brown reportedly called several guests "beautiful" and told a female server that she could make hundreds of dollars as a waitress in the United States. Brown has attributed critics’ accusations of cultural insensitivity to politics and dislike for President Donald Trump, who appointed Brown.

Ethiopia sent over 200 peacekeepers to South Sudan over the weekend in hopes of stabilizing the country’s security crisis. Last December, the UN Security Council unanimously adopted Resolution 2327 to increase the number of security personnel in the country, which has been reeling from conflict and political chaos since December 2013, when a dispute between the president and his former vice president escalated into civil war. Attempts at a peaceful negotiation of the conflict have failed despite mediation by the UN, African Union, and the Intergovernmental Authority on Development (IGAD). On Wednesday, U.S. Ambassador to the UN Nikki Haley had to be evacuated from a UN camp for displaced people during a visit to South Sudan due to growing anti-government protests.