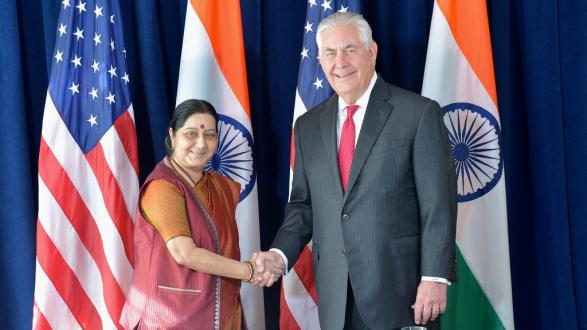 Secretary of State Rex Tillerson’s Diwali speech on U.S.-India relations last Wednesday, ahead of his trip to India this week, may have been the most significant articulation of U.S. foreign policy that this administration has provided to date.

Perhaps in the spirit of Diwali, a Hindu festival that signifies victory of light over darkness, Tillerson decided to shed some light on an otherwise dark and obscure foreign policy. At a time when policy is seemingly made through presidential tweets, the speech was remarkable for both its coherence and continuity. It presented a broader vision for the region that was missing in President Donald Trump’s South Asia strategy speech. Most importantly, it offered a reassuring sentiment for the great many who are concerned that the administration is abandoning the very global order that the United States has led and defended since World War II. Let’s hope this speech was not an anomaly.

The fact that Tillerson chose to focus on the bilateral relationship with India as the lynchpin to peace and prosperity across the Indo-Pacific region is highly significant. By recognizing India’s role in a larger strategy to promote "rule of law, freedom of navigation, universal values, and free trade," Tillerson put forward what the Trump administration has struggled to build until now—a coherent view on the values that underpin its foreign policy. This view calls for strategic partnerships with like-minded partners and friends, such as India, to form the basis for the promotion of a global order based on international norms and rules.

Perhaps Tillerson’s remarks regarding the importance of an open financial and economic system as a key ingredient for sustainable growth was as much for a domestic audience as it was for those around the world.

Tillerson articulated a positive view for the importance of U.S. partnership with India—one that goes far beyond that of countering China. In this view, which was formally outlined in the January 2015 Joint Strategic Vision for the Asia Pacific and Indian Ocean Region, the U.S. and India have a firm and fundamental stake in defense of the rules-based international order, grounded in shared values.

Tillerson underscored that U.S. strategic and economic interests in the Indo-Pacific are inexorably linked to India. It may be too much to ask of India, a country that liberalized its economy in fits and starts, for it to become a global champion for free trade and open borders. Ironically, India is going through some of the same socioeconomic dynamics as the United States—rising nationalism and fear mongering against religious minorities that largely stems from heightened economic anxiety.

Perhaps Tillerson’s remarks regarding the importance of an open financial and economic system as a key ingredient for sustainable growth was as much for a domestic audience as it was for those around the world. But, there is no doubt that Tillerson’s remarks represent a strong constituency in the United States that desires to see India fully shed its nonaligned roots, become a beacon of democratic values, and ascend as an anchor in the Indo-Pacific to defend international norms and counter the forces of authoritarianism.

Given that the Trump administration seems to have defined itself as being against whatever positions the Obama administration took, Tillerson’s speech demonstrated remarkable continuity with U.S. policy proclamations from the past two presidents. The speech could have easily been given by former Secretary of State John Kerry, and in fact reflected many of the same themes Kerry delivered in an address in New Delhi last year.

Does the Trump administration have the willingness and leadership to take the course that Tillerson laid out?

While Kerry discussed the "deep cooperation" between the United States and India to address global challenges, Tillerson described a growing "strategic convergence" between the two countries. Both Kerry and Tillerson reaffirmed our two nations’ commitments to a rules-based international order, terminology that has been largely absent from (and sometimes derided in) the Trump administration’s lexicon until now.

So, the question now is whether this view is a real harbinger for future foreign policy, or perhaps just what Tillerson would like it to be. Sadly, Tillerson has had other policy pronouncements, most recently about North Korea, undercut by presidential tweets. Trump will be making a multination tour of Asia next month, which could offer further clues.

Much like the significance of Diwali itself, the United States has the potential and wherewithal to spread light throughout every dark corner of the world. India will be a critical if not an indispensable partner in that endeavor. The question remains: Does the Trump administration have the willingness and leadership to take the course that Tillerson laid out?
____________________

Manpreet Singh Anand is a Pacific Council member and a distinguished professor of practice at the Near East South Asia Center for Strategic Studies and served as deputy assistant secretary of state for South Asia in the Obama administration.

The views and opinions expressed here are those of the author and do not necessarily reflect the official policy or position of the Pacific Council, nor of the NESA Center, the Department of Defense, or the U.S. government.