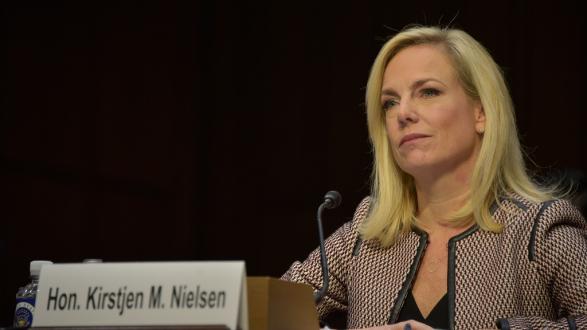 Following near universal outrage about its recently implemented "zero tolerance" policy that resulted in children being separated from their mothers after crossing the border into the United States, the Trump administration reversed course. President Trump on Wednesday signed an executive order ending the policy following days of saying only Congress could fix the problem. "We’re going to have strong, very strong borders, but we’re going to keep the families together," Trump said Wednesday. "I didn’t like the sight or the feeling of families being separated."

India took direct control of the Kashmir state on Wednesday. The move followed the end of a shaky alliance between the ruling Hindu nationalist Bharatiya Janata Party and the Kashmiri People’s Democratic Party. The political coalition fell apart following a "deteriorating security situation" and a "wake of increasing violence." Elections in the state will be held in 2020, with all decisions made by the federal government in New Delhi until then.

Officials from Germany, France, Italy, Spain, Austria, and Bulgaria will hold an emergency summit this weekend in Brussels to discuss the refugee crisis and EU immigration policy. The leaders of Germany and France have called for a unified EU approach to migration, including allowing EU countries to turn asylum seekers away who have already registered in another EU member country. The meeting is intended to avoid conflict on the migration issue at the upcoming EU summit on June 28-29.

U.S. Ambassador to the UN Nikki Haley announced Tuesday that the United States is withdrawing from the UN Human Rights Council. The move came after the council criticized Israel for shooting unarmed protesters. Haley called the council a "cesspool of political bias" and a "hypocritical and self-serving organization." Rights groups condemned the withdrawal and said it could result in countries with less than stellar human rights records filling the void.

According to a new poll by the Lowry Institute, a majority of Australians are worried about the state of the world. Only 30 percent have confidence in President Trump, compared to 43 percent who have confidence in President Xi. However, Australians are also concerned about Chinese expansion and investment, as well as immigration and climate change. About 72 percent of Australians said their government allowed "too much investment" in real estate and agriculture from China, up from 56 percent in 2014.

A Kenyan court rejected a Kenyan doctor’s appeal aimed at blocking the deployment of 100 Cuban doctors in Kenya. "The petitioners have not proved that the doctors’ rights and the rights of other specialized doctors were infringed by the decision to import the Cuban doctors," the judge ruled, clearing the way for the Cuban specialists—including radiologists, nephrologists, orthopedic surgeons, plastic surgeons, and neurologists—to begin working at Kenyan hospitals. A Kenyan doctors’ union opposed the ruling, saying 171 local specialists are unemployed.