The Future of U.S.-Mexico Relations is Unpredictable
Mexico 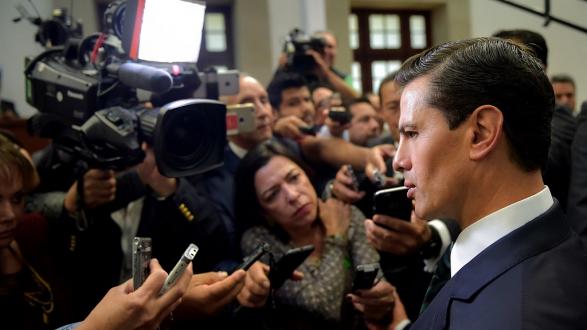 The U.S.-Mexico relationship is the strongest it’s ever been, but its future is uncertain, Dr. Pamela Starr and Mr. Seth Stodder told Pacific Council members in a Situation Briefing on recent developments between the two neighboring countries.

Starr is the director of the U.S.-Mexico Network and a professor of International Relations at the University of Southern California. Stodder is the former Assistant Secretary of Homeland Security for Border, Immigration, and Trade Policy. Presented as part of the Pacific Council’s Mexico Initiative, the discussion was moderated by Ms. Katja Newman, founder and president of KSN Consulting.

"However things turn out over the next four to eight years, the bilateral relationship will change in ways that are likely to be unpredictable," said Starr. "The relationship is being defined by President Trump himself, through his rhetoric, his tweeting, and his penchant for using private sector negotiating techniques for diplomacy."

On January 25, President Donald Trump signed two executive orders directing the construction of a wall on the U.S.-Mexico border, promising that Mexico will reimburse U.S. taxpayers for the cost of construction. Following that action and a subsequent Twitter exchange, Mexican president Enrique Peña Nieto canceled his planned visit to the White House.

"Mexico has three very powerful tools in its foreign policy toolbox: geography, its multi-party democracy, and a new nationalism that is bubbling up in Mexico today."

"Since the 9/11 attacks, there has been a bipartisan effort in both the Bush and Obama administrations to strengthen the U.S. relationship with Mexico," said Stodder. "Both administrations worked closely with authorities in Mexico to remove unnecessary barriers to trade; deepened cooperation on law enforcement in fighting the drug cartels, counter-terrorism efforts, and securing the North American perimeter; and worked together on the migration challenges."

That important relationship, Stodder added, has been "thrown up in the air because of this administration’s rhetoric and the fight over the wall."

Stodder said he does not believe the border wall will solve the migration problem, adding that the actual number of people coming across the border from Mexico to the United States is at a 40-year low.

"The wall will actually anger Mexico and insult Mexican voters who could be tempted by a nationalist candidate in the 2018 presidential election," he said.

Starr believes that regardless of who is elected president of Mexico in 2018, that person will be a nationalist.

"That’s almost a forgone conclusion," she said. "There is a new nationalism bubbling up in Mexico today. Mexico has three very powerful tools in its foreign policy toolbox. One is geography; put simply, Mexico is not going anywhere. Mexico matters to the United States in ways that no other country beyond Canada ever will. Another tool is that Mexico is a multi-party democracy, which means Mexico’s negotiators can ignore Trump’s taunts because they have other actors within Mexico who can respond. The third tool is this new nationalism that generates this cacophony of voices that are loudly screaming that Mexico will not be taken advantage of."

"Mexico has intercepted and returned hundreds of thousands of Central Americans, by U.S. request. That cooperation could stop."

Starr said this is a peculiar moment between the United States and Mexico, rather than a relationship on the brink.

"President Trump inherited a relationship that was the best that it has ever been between these two countries," she said. "There has been very close collaboration across the board: on counter-narcotics, terrorism and counter-intelligence, trans-migration, water resources, and of course very close economic collaboration. But at the same time, the rhetoric and initial actions of the Trump administration have generated a level of tension in the relationship that we haven’t seen at least since the mid-1980s. That combination is unlike anything we’ve seen before in the bilateral relationship."

Stodder agreed that Mexico has been a major partner to the United States in managing migration flows, especially coming from Central America.

"Mexico has moved from primarily a source country for illegal immigration into the United States to a transit country," he said. "The demographics of who is actually being apprehended by the border patrol have changed. Now over half of them are not coming from Mexico but rather Central America."

He pointed out that the combination of the environmental crisis, economic crisis, and gang violence in the Northern Triangle countries—Honduras, Guatemala, and El Salvador—is driving hundreds of thousands of people to head north.

"Mexico has intercepted and returned hundreds of thousands of Central Americans, by U.S. request," said Stodder, adding that that cooperation could stop if U.S.-Mexico relations sour.

"Mexico is in a vulnerable position. Its economy is structured to trade with the United States, particularly the manufacturing sector. Anything that threatens that will damage the Mexican economy."

The North American Free Trade Agreement (NAFTA) is another area where there could be potential cooperation or frustration between the two countries, the speakers said. During the campaign, then-candidate Trump derided NAFTA as a disaster and a job killer and vowed to renegotiate it. Starr said the collapse of the trade deal would be a disaster economically for both countries.

"The most likely significant risk in a renegotiation of NAFTA is that a lot of investors will keep their money on the sideline and wait until they know what the new rules of the game will be," she said. "The biggest threat to Mexico is that in a renegotiation of NAFTA, the U.S. government wants to insist on some form of a border tax or tariff or quota that will be designed to force down U.S. imports from Mexico."

Starr added that Mexico will face significant economic consequences if the renegotiation of NAFTA is messy or even drawn out.

"Mexico is in a vulnerable position," said Starr. "Its economy is structured to trade with the United States, particularly the manufacturing sector. Anything that threatens that will damage the Mexican economy."