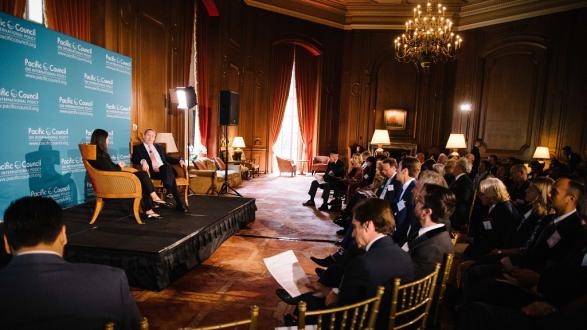 Despite what critics have said about Brexit, the United Kingdom’s Secretary of State for International Trade Dr. Liam Fox argued that better trade deals await the UK after they leave the European Union next year in a discussion with Pacific Council members at the Global Los Angeles Summit. The discussion was moderated by Ambassador Nina Hachigian, deputy mayor for international affairs for the city of Los Angeles.

"As we leave the EU, we have the potential to negotiate better trade deals for the UK," said Fox. "Those opportunities are still out there. Whether we take full advantage of that remains to be seen. There’s a big world outside the European Union. We better be where the markets are going."

Fox also argued that the single market has been much less beneficial for the UK than any other EU country, and that claims that the UK would suffer financially after leaving the EU were overblown.

"I was a Leaver in the Brexit campaign because look at it this way: would the United States want to join a North American Union where the central government was controlled in Mexico City?" he said. "People were worried the UK would become more insular, but it’s actually become more global. Claims of economic Armageddon after Brexit haven’t played out. I’m more confident than ever that London will retain its preeminence as a global financial leader. That said, we will need new border and immigration systems by the time the UK leaves the EU next March."

One of the biggest challenges in the Brexit negotiations is the border between Ireland and Northern Ireland, the only land border between the UK and the EU. Observers worry that a return to a hard border with customs and passport checks could reignite violence in the region. Northern Ireland voted to remain in the EU. But Fox said that that challenge, too, has been overstated.

"Ireland doesn’t have open borders with the rest of the EU, so that makes the border issue with the UK easier," he said. "We think it’s in both of our best interests to have open and liberal movement across the Ireland-Northern Ireland border."

"People were worried the UK would become more insular, but it’s actually become more global. Claims of economic Armageddon after Brexit haven’t played out. I’m more confident than ever that London will retain its preeminence as a global financial leader."

Fox is likewise not concerned about a renewed push for Scottish independence, even though Scotland also voted to remain in the EU.

"Many people said Brexit will result in Scotland leaving the UK, but I said exactly the opposite will be true," he said. "We’re a bigger trade partner for them than the EU."

Fox also argued that the idea of a unified Europe has failed, citing the rising trend of far right populism.

"The concept of an ever closer union in Europe—how many bits of evidence do you need to see that's not working?" he said.

When asked if there is any chance that Brexit will be canceled, Fox emphatically stated, "No. It was a binding democratic referendum."