Filling the Void: U.S. States, Cities to Lead on Climate 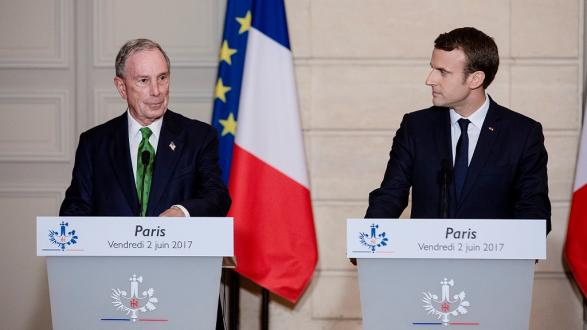 Gross is a fellow in the Foreign Policy, Energy Security, and Climate Initiative at the Brookings Institution. Preston is the director of the Infrastructure Resilience and Environmental Policy Program and a senior policy researcher at the RAND Corporation. The discussion was moderated by Mr. Jesse Medlong, an environmental lawyer and litigator at DLA Piper.

"There won’t be a complete absence of U.S. action on climate change—only from the federal government," said Gross. "One bright spot in this gloomy outlook has been the reaction of U.S. state and local governments and U.S. businesses. Dealing with climate change requires a whole societal approach, and subnational governments and businesses have crucial roles to play. We saw several U.S. cities and states mobilize quickly to say they still support climate action."

On June 1, 2017, U.S. President Donald J. Trump announced that the United States will withdraw from the Paris Accord. The global pact was agreed to by 195 countries in 2015 and aims to significantly cut greenhouse gas emissions. The process of withdrawing could take up to four years.

"We’re still seeing a lot of commitment to action at the state and local level, which is where a lot of our actual emissions come from."

"We’re still seeing a lot of commitment to action at the state and local level, which is where a lot of our actual emissions come from," Preston agreed. "So it could be that we continue to make significant progress through those mechanisms even without federal leadership."

Preston argued out that the world already knew the Trump administration was not going to pursue aggressive climate action regardless of whether or not it remained in the agreement.

"What does the U.S. withdrawal mean for the climate system itself? The objective was to limit warming to less than 2 degrees, but the commitments that have been made by various nations that are party to the Paris Accord don’t get us to that particular objective," said Preston. "So we know more aggressive action is going to be needed down the road. Without the United States, that objective is certainly more difficult, but the real implications are unknown at this point."

Still, Gross said withdrawing the United States from the agreement was a meaningless gesture because it was nonbinding and voluntary.

"I’m really heartbroken at the administration’s decision to pull the United States out of the Paris Accord," said Gross. "It just didn’t need to happen. The agreement was structured to allow flexibility, and the national contributions that each country pledged are nonbinding. The president could have pursued his policy goals while still remaining party to the agreement. It was a serious foreign policy mistake to withdraw. It makes it harder for our allies to cooperate with us. There is no advantage in withdrawing because the United States gets absolutely nothing in return."

Gross said the flexibility and bottom-up approach to setting climate goals in the Paris Accord is what differentiated it from the Kyoto Protocol, which the United States also played a large role in negotiating.

"The Kyoto Protocol had more imposed goals than flexibility, which the United States had a hard time with," said Gross. "The other issue in Kyoto that was challenging for the U.S. government was that requirements were mandated for developed countries but not developing countries."

Preston believes the world can still make progress and take action on climate change even without the United States.

"U.S. leadership is relevant and important," he said, "but to what extent can the world collectively make progress on mitigation even if the United States doesn’t engage? What we’ve seen is that other nations have long been committed to this, so if the United States doesn’t lead on climate action, other countries can and will step into that vacuum."

"It’s harmful to U.S. credibility that we put a lot of effort into negotiating an agreement and then backed away from it so thoroughly."

Gross pointed out that from Washington’s perspective, however, its credibility is damaged by withdrawing from the Paris Accord.

"It’s harmful to U.S. credibility that we put a lot of effort into negotiating an agreement and then backed away from it so thoroughly," she said. "It definitely raises questions about our reliability on other sorts of agreements. There’s a broad understanding that we’ve had a serious shift in ideology of our ruling government, but that still makes us a difficult partner to work with or trust. The administration had the right to pull out of the Paris Accord, but I maintain that it was not our best move."

Preston added that this is just one of a number of areas where the United States has shifted its position in terms of its willingness to engage globally.

"It’s not just withdrawing from the Paris Accord, but the net effect of that shift in posture with respect to the international community that’s going to be important," he said.