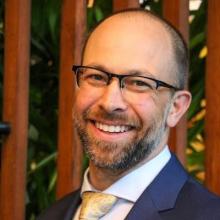 Jesse is a sustainability lawyer and climate diplomat at the San Francisco office of the global law firm DLA Piper. He has worked at the US Mission to the UN Human Rights Council, and now he represents the country Georgia in negotiations under the United Nations Framework Convention on Climate Change (UNFCCC), including at the 2015 Paris climate summit and in Georgia’s accession to the Environmental Integrity Group, one of only four formally recognized negotiating blocs within the UNFCCC.

In his domestic practice, Jesse represents clients on a wide variety of litigation and environmental matters, with a focus on ESG for business. He spent his first year of practice as a Krantz Fellow working exclusively on pro bono matters. During that year, he divided his time between providing legal services to military veterans and supporting New Perimeter, DLA Piper’s unique global nonprofit.

Before going to law school, he served for ten years in the U.S. Navy, where he received a commendation for his performance on over 100 maritime interdiction operations to enforce United Nations Security Council Resolutions imposed on the government of Saddam Hussein.

Jesse serves on several nonprofit boards, including legal services organizations and organizations dedicated to veterans and to unhoused persons. And he is an active member of the New Leaders Council and the Truman National Security Project's Defense Council. In 2019, the German Marshall Fund selected him as a Marshall Memorial Fellow to further trans-Atlantic ties through civil diplomacy.

Apart from his professional and civic work, Jesse stays busy with his five children. He is also an avid writer, producing everything from academic legal articles to children's literature (although he gets significant help on the latter from Ván and Clementine, two of his daughters). He sees his community activities as an integral part of teaching responsible citizenship to his children.

What to Expect at the COP23 Climate Summit in Bonn
Four Issues to Follow at COP22: Will We Always Have Paris?
Globalization and the Ghost of Captain Ludd