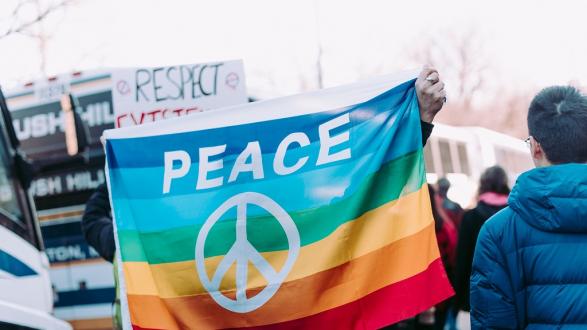 Despite diminishing ISIL territory and revenue, the organization still remains strong due to their advanced technological network and online capabilities.

In light of the recent terrorist attacks in Indonesia, where three families, including their young children, detonated bombs outside a police station and inside churches in what the Islamic State (ISIL) called "a martyrdom operation," questions about the process of radicalization from religious believer to ISIL extremist remain somewhat of a mystery.

Many ISIL combatants, like the recent Indonesian attackers, were radicalized in their home countries and connected to like-minded individuals or groups online, without having to travel to Syria for training. But questions still remain as to what drove them to radicalization. There is plenty of research that points to a variety of factors in the radicalization of terrorists, including the need for brotherhood, community, and identity. But the most dangerous factor—and by dangerous, I mean simply that it is perhaps the hardest to address—is religion.

Religion can seem to add legitimacy to an underlying need for community or identity, and therefore, can be an effective means for recruitment, especially for individuals participating in soul-searching efforts to find a place of belonging.

ISIL has managed to take an inclusive, peaceful religion and manipulate its doctrine to convince vulnerable individuals to join its ranks.

This is obviously problematic, as ISIL has managed to take an inclusive, peaceful religion and manipulate its doctrine to convince vulnerable individuals to join its ranks. "Due to their perversion of Islam and their targeting of Muslims as both recruits and victims, a peaceful and honorable religion is under attack," writes Shannon Green and Keith Proctor in a CSIS report on countering violent extremism.

So how is religion used in recruitment tactics? The propaganda machine behind ISIL is impressive, specifically in relation to its religious messaging. According to the Centre on Religion and Geopolitics, 87 percent of jihadist propaganda includes "justifications from the Qur’an, Hadith, or scholarship." (The Hadith is a collection of sayings from the prophet Muhammad, seen as providing moral guidance for living.)

Additionally, the group’s media resources include clear references to religious themes. Its original magazine Dabiq, launched in 2014, recruits new members by providing religious textual references to jihad, "true Islam," and a call to turn away from infidel behavior and follow Allah. Its religious justifications are quite clear: "People are ignorant of their religion and they thirst for those who can teach them and help them understand it. So fear Allah, O slaves of Allah."

ISIL clearly ignores the parts of the Qur’an about treating others how they would like to be treated.

In addition, the magazine includes Qur’anic verses such as: "And who would turn away from the religion of Ibrahim except one who makes a fool of himself. Truly, We chose him in this world, and indeed in the Hereafter he will be among the righteous."

Interestingly enough, this entire issue of the magazine includes pages of in-depth analysis of this verse and others in order to prove the religious and political legitimacy of ISIL’s fight. But while the group uses a great deal of scripture to justify their work, their justifications, according to the Centre on Religion and Geopolitics, are "usually presented without context, reinforcing the accusation that the groups ‘cherry pick’ passages that support their case." It’s easy to see why. The group clearly ignores the parts of the quoted verses about treating others how they would like to be treated. The group finds ways to justify their horrific violence despite their chosen verses making no mention of such brutality. They are master manipulators.

This is only one example from the many issues of Dabiq which seek to use religious themes to entice readers, including an issue entitled "Breaking the Cross," which was meant to discredit Western Christianity and convince Christians to drop their beliefs and follow Islam.

A new magazine called Rumiyah replaced Dabiq and focuses “on the group’s concept of monotheism,” according to the Clarion Project, a non-profit organization which seeks to challenge radical Islam and provide a space for moderate Muslims and activists to speak out. Rumiyah is hyper-focused on religious themes—the first issue includes a page discussing the purpose of the magazine, "to clarify the reality of Islam." Like Dabiq, it includes pages of theological commentary on Qur’anic verses.

It is hard not to see the dichotomy of religious scripture and sacred sayings from the prophet Muhammed, and the violent and gruesome depictions of battle and often murder in ISIL's magazine.

But why are these magazines so appealing? The magazines are high-quality, published in multiple languages, and include creative infographics and photos to accompany the content. The group makes the content aesthetically pleasing. But it is hard not to see the dichotomy of religious scripture and sacred sayings from the prophet Muhammed, and the violent and gruesome depictions of battle and often murder in its pages. The group has hijacked a faith and transformed it into a weapon for evil.

The group also uses theological themes in its multimedia content. Its videos are laden with references to Allah and verses from the Qur’an, such as: "Oh you who believe, answer the call of Allah and his messenger when he calls you, to what gives you life...what gives you life is jihad."

This verse itself is problematic when reading from a true contextual standpoint. ISIL and other terrorist organizations have taken the word "jihad" to mean holy war, when in reality, it simply refers to "struggle," often an internal spiritual struggle. It does not inherently represent violence.

But in addition to the theological verbiage, the group also uses music in the background to further the religious tone. The music they use are called nasheeds, which are types of hymns which have been used by terrorists for over 40 years.

How do we work to restore tolerance for a faith which almost 2 billion people around the world believe in, while fighting extremism and the perversion of the religion’s core concepts?

But what about the delivery of information?

The topic of social media always accompanies discussions of ISIL recruitment. Social media platforms are the prime delivery system for recruitment content where users can share the magazines, videos, press releases, etc., in addition to religious content like lunar prayer calendars and hadiths. When it comes to messaging, ISIL "mastered this lesson and has successfully promoted its caliphate vision to a mass audience—something that al Qaeda always struggled to do," according to Green and Proctor.

A New York Times article written by Rukmini Callimachi (who hosts the podcast "Caliphate") features a 23-year-old woman who was recruited by ISIL. She is an example of the religious aspects of recruitment. Her recruiter instructed her to start focusing on Islamic rituals, and even asked her to download the Islamic Hub app to be sent daily hadiths. The young woman, who was previously a devout Christian, was wrestling with theological ideas when her recruiter told her, "Islam is the correction of Christianity."

They would later send her a Qur’an and study guides, books on Islam, a prayer rug, and head scarves. While it is clear this young woman was a target because of her search for identify, community, and a place to fit in, it is impossible to argue against the deep theological roots behind the message.

So where do we go from here? How do we work to restore tolerance for a faith which almost 2 billion people around the world believe in, while fighting extremism and the perversion of the religion’s core concepts?

The CSIS report points to the necessity of providing a solid counter-narrative, as opposed to the reactionary work the West has grown accustomed to doing, such as removing Twitter accounts. The report highlights a successful U.S. State Department program in Nigeria which facilitated the creation of a radio program that countered Boko Haram’s messaging by providing alternative, local narratives. The State Department has the ability to work in the countering violent extremism field, but it’s a question of whether they have enough resources, or are using all the resources available to them. Programs like the radio program in Nigeria work, but what about countering extremism on a more global scale?

This is where the State Department’s Global Engagement Center (GEC) might fit in. The center, which was created in 2016, was originally tasked with "coordinating U.S. counterterrorism messaging to foreign audiences." But recently it has struggled to find its footing. Its new focus is now on countering disinformation and seems to have developed a focus away from traditional counterterrorism messaging, with most of its funding allocated to Russian interference rather than ISIL propaganda.

But just because ISIL is losing territory does not mean their work is done. Just because they may have fewer active Twitter accounts does not mean they have stopped infiltrating digital channels. In fact, researcher Ali Fisher believes "the impression of decline in the use of Twitter may also occur because researchers are less successful at locating the content on Twitter than they once were." The fight is far from over, as we can see from last week’s terrorist attacks in Indonesia. The organization is still incredibly active online. The work of the Global Engagement Center is just as important now as ever before.

We must promote accurate interpretations of the text—and of all religious text for that matter, regardless of religion—and encourage voices who seek to achieve the very thing every major world religion teaches: peace and love.

One interesting point to note is that their work in content production focuses on disseminating “factual content about terrorist organizations into the information space to counter recruitment and radicalization to violence. They also allow us to develop and disseminate messaging on effective themes, such as "exposing ISIL’s financial and governance failures; its violence against women, children, and religious minorities; and its ongoing territorial losses," according to the Global Engagement Center website.

Unfortunately, most of these themes don’t seem to reach the heart of the problem. It is clear to most people that ISIL engages in violence, so spending time sharing messaging around that theme seems imprudent. Instead, perhaps the GEC should focus on highlighting moderate voices who will clarify the true meaning behind the Qur’anic verses and Hadiths that ISIL has so often distorted. Incorporating religion into counter-messaging is necessary. Ignoring the issue will only promote continued Islamophobia around the world.

We must promote accurate interpretations of the text—and of all religious text for that matter, regardless of religion—and encourage voices who seek to achieve the very thing every major world religion teaches: peace and love. It is only then that we might truly see change.

Madison Jones is the Pacific Council’s Communications Associate and a recent graduate of the Master’s in Public Diplomacy program at USC Annenberg.