Calming the Rhetoric Around Immigration 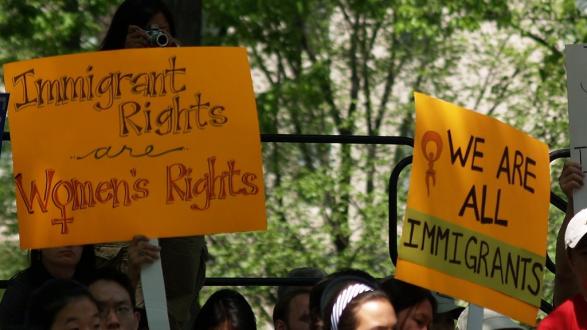 Living in London, I am spared much of the discussion of U.S. immigration policy (a void unfortunately filled by the Brexit debate). When I do tune in, I hear more partisan noise than any effort to develop a positive way forward. The din calls to mind William Wordsworth’s poetic lament, “The world is too much with us.”

The current debates are plagued by the rhetoric of dehumanization. In a sense, there’s nothing new here—harsh language seems to have accompanied each of the periodic immigrations of large numbers of people to the United States. What is different now is the volume of the extreme voices engaged in the debate.

My ancestors were among the great mass of French-speaking, predominantly Roman Catholic people of Québec who moved to New England between 1840 and 1930, attracted by work in the region’s growing textile industry. David Vermette’s history, A Distinct Alien Race, chronicles the abuses they suffered at the hands of the Protestant clergy, the Klu Klux Klan, and even promoters of the eugenics movement.

Rather than advancing policy initiatives through the hard work of consensus building, too many elected officials focus on the destruction of their opponents.

Acceptance into American society was hard for my forebears, but they ultimately were embraced by a country that has always found its way to welcome needed human capital and to accommodate cultural differences. It’s now rare to hear of Americans of French-Canadian ancestry suffering prejudice.

The extent to which social media amplifies the voices of nativists would undoubtedly have made their assimilation more difficult had they entered the United States today. Endlessly echoed comments such as President Trump’s “these aren’t people; these are animals” have exacerbated the social barriers to immigration. They have also fostered an atmosphere that makes it almost impossible to move forward with consideration of needed policy reform.

At least as it concerns immigration, good governance has been supplanted by gesture politics and wild rhetoric. Rather than advancing policy initiatives through the hard work of consensus building, too many elected officials focus on the destruction of their opponents. The voices of those holding extreme views drown out those who seek to find consensus solutions to difficult issues.

The starting point should be calling out vile rhetoric from whatever source it arises—then quickly dismissing it as being unworthy of amplification.

The context in which Wordsworth wrote his lament was the First Industrial Revolution and contemporary materialism. In his view, mankind needed to restore its focus on fundamental truths, regaining communion with nature and the spiritual.

Wordsworth’s sentiment serves as a prescription for our age: our politicians and partisans should cool their fervor and take a dispassionate approach to resolving thorny policy problems.

The starting point should be calling out vile rhetoric from whatever source it arises—then quickly dismissing it as being unworthy of amplification. In the same vein, abuses should be documented and disparaged, but coverage of them should not supplant reasoned commentary on needed reforms.

There is merit to directing focus at the harsh conditions the government sometimes inflicts on immigrants and to the troubling backgrounds of some of them, but a broader conversation is necessary if solutions are to be found. Mainstream media has an important role here, dedicating itself to illuminating the consequential, rather than generating clickbait.

America has a demonstrated capacity for self-correction. If our society recommits itself to its fundamental values and principles, the problems which so trouble us today can be resolved.

All commentators should acknowledge the complexity of the issues. Those focused on controls should recognize the contributions immigrants make to our country. Those promoting immigration should concede the legitimacy of concerns about uncontrolled immigration.

Ensuing efforts to reach a policy consensus should revert to the dry language of legislative fixes. Clear-headed discussions of visa eligibility, pathways to citizenship, and the like should replace overheated rhetoric.

America has a demonstrated capacity for self-correction. If our society recommits itself to its fundamental values and principles, the problems which so trouble us today can be resolved. “The world” will remain with us, but we will be able to move forward with the spirit needed to confront the challenges we face.

Kim Gagné is a Pacific Council member and a London-based advocate and counsellor with experience in law, diplomacy, and government relations.