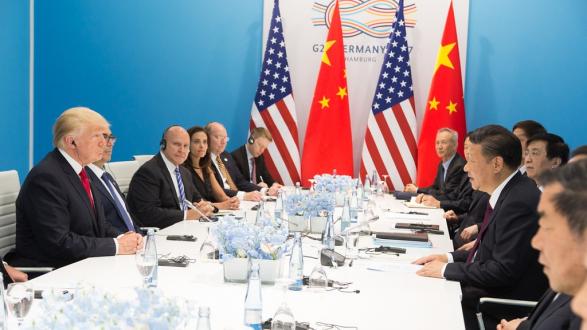 A teleconference on ongoing trade negotiations between China and the United States.

Speakers will discuss the short and long-term impact of the U.S.-China trade war and explore the best ways to get "tough" on China.

For nearly a year, the United States and China have been locked in a heated trade war that has been impacting several key industries while leaving governments caught in the middle between the two powers. Despite hopes that ongoing negotiations would bring this fight to a close, the United States recently acted again and raised tariffs on hundreds of billions of dollars’ worth of Chinese products. China has since hinted that its response could target U.S. reliance on rare earth elements, materials important to the manufacture of military equipment and everyday items such as cell phones. The fallout has been global, with financial markets recording significant losses, the lucrative flow of tourism between the United States and China falling, and countries assessing how their own economies will fare. Economists estimate that expanded tariffs may even cost global GDP $600 billion by 2021. In the United States, the tit-for-tat builds on President Trump’s early promises to challenge China’s trade policies, but political ramifications may intensify as Americans bear the brunt of tariff retaliation.

Is a U.S.-China trade deal in sight? What does the future of the U.S.-China economic relationship look like?

Ira Kasoff is a Pacific Council member and a recognized expert on Asia. Read more.

Malcolm Riddell is a Pacific Council member who has served as an investment banker, diplomat, lawyer, Harvard academic, and CIA spy. Read more.