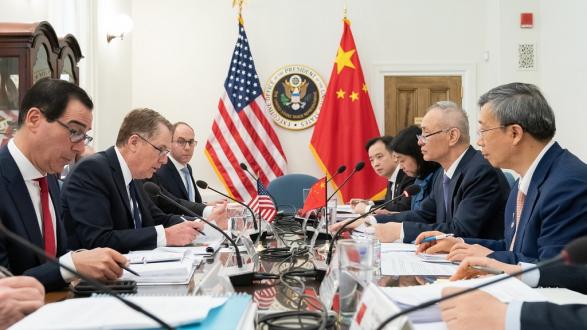 China had hoped to reach a trade deal with the United States by now, but the perceived lack of reciprocity from the Trump administration has made China more resistant to be flexible as talks continue, experts told Pacific Council members in a teleconference featuring Ira Kasoff, senior counselor on APCO Worldwide’s International Advisory Council, and Meg Lundsager, public policy fellow at the Wilson Center. The discussion was moderated by Malcolm Riddell, president of RiddellTseng.

When it comes to the U.S.-China trade war, Riddell pointed out, “I read a lot of the media, and the reporting [on the trade war] is great, but the analysis often isn’t.”

As Kasoff explained, the trade war’s timeline has unfolded over the course of almost two years. In August 2017, the U.S. Trade Representative Robert Lighthizer initiated a Section 301 investigation of China’s trade practices, later issuing a report in March 2018 that identified numerous problems in China’s behavior. This report provided a legal basis for the United States to begin imposing tariffs in July 2018.

President Trump again increased tariffs on May 10, 2019, and a week later, the United States added Huawei to the U.S. Entity List, requiring American firms to get a license to sell to Huawei. China responded with additional tariffs and a decision to introduce an Unreliable Entities List, identifying foreign companies that present a risk to Chinese companies.

"Until a month or so ago, I was quite confident that we would get a deal, but it’s been a bit of a roller coaster since then."

“Until a month or so ago, I was quite confident that we would get a deal,” Kasoff said. “My thinking was that Trump very much needed a win and that he believed the stock market would stay strong, or maybe get stronger, if he reached a deal with China, but it’s been a bit of a roller coaster since then.”

In the background of these events, China has also continually decreased tariffs on other trading partners since January 2018, while increasing tariffs on the United States, thereby hurting the competitiveness of U.S. exporters. While the tariff rate on U.S. goods has gone from 8 percent to 20.7 percent, average tariff rates on goods from other countries have declined in China from 8 percent to 6.7 percent.

Lundsager, who previously served as U.S. executive director of the IMF, stated that “global trade growth has been the engine of growth in many countries around the world.” Even without the U.S.-China trade war, “that now is diminishing as trade volumes are slowing, or even declining.”

For China’s part, the conflict with the United States has contributed to a decrease in China’s imports, which means China’s trading partners like South Korea and Japan are also impacted. China has also been relying on monetary policy to maintain its economic progress. “The People’s Bank is now trying to encourage lending to small and medium-sized enterprises to keep job creation going throughout the country,” Lundsager explained. “The problem is the state-owned enterprises still continue to suck up much of the credit provision.”

Given the strain on its economy, China had hoped to reach a trade deal with the United States. Accordingly, the Chinese government took various conciliatory measures, including the passage of a more open foreign investment law, greater restrictions on stealing trade secrets, and reclassifying fentanyl as a controlled substance. However, as Kasoff explained, the perceived lack of reciprocity from the Trump administration has made China more resistant to be flexible as talks continue.

While the U.S. economy has stayed strong, advanced economies like Europe and Japan have had slow growth. Consequently, the United States’ ability to import goods has remained strong, while countries across the world have less buying power for U.S. products, keeping U.S. exports lower. President Trump has also shared his intention to import more from other countries like Vietnam, rather than China, which would simply redirect U.S. trade dollars rather than reducing the trade deficit.

"2019 is a very sensitive year for the Communist Party. Chinese leaders do not want to see a significant weakening of the economy this year."

As both speakers pointed out, longstanding U.S. allies are dissatisfied with U.S. actions and inconsistencies on tariffs. Lundsager is hopeful, however, that the United States is beginning to understand the necessity of coordinating with allies to counter China, as the United States is working with Japan and the Organization for Economic Cooperation and Development to develop new strategies.

Whether China will actually change in response to international coordination remains to be seen. Chinese President Xi Jinping is not likely to change his current system of state-controlled economic sectors, and Chinese authorities will continue to closely monitor the yuan with the risk of its citizens moving their money and assets outside of China. Furthermore, as Lundsager pointed out, “China is clearly on a path to develop its own high-tech manufacturing services sector, and some [U.S.] trade actions are likely to accelerate this, given the loss of access to U.S. produced imports as we’ve seen with the Huawei dispute.”

Kasoff also explained that “2019 is a very sensitive year for the Communist Party. It’s the 100th anniversary of the May 4 movement, seen as the beginning of modern nationalism in China. This is also the 70th anniversary of the founding of the People’s Republic of China, and it’s the 30th anniversary of the Tiananmen [Square] Massacre.” In essence, “Chinese leaders do not want to see a significant weakening of the economy this year,” and there are many ways that China could retaliate against the United States as this dispute continues.

China could target U.S. companies, like Apple, GM, and Starbucks, that have major investments in China or start limiting the supply of rare earth minerals. Though not often reported in the media, China is in a powerful position if they were to cut off the U.S. supply of these materials. Rare earth minerals are used heavily in the production of high tech products, and China is the world’s largest supplier.

"We just can’t assume, as we’ve all learned, that China is going to become more like us. We’re going to have a state-run, state-controlled economy [in China] for some time to come."

Apart from trade, China also has potential to weigh its geopolitical influence with North Korea, the UN Security Council, the South China Sea, and Taiwan as a means of retaliation.

By necessity, the United States will have to seek out its allies to counter China effectively, as it did when its united front with the EU led China to withdraw its WTO request to be recognized as a market economy. Lundsager underscored that the American business sector, in particular, needs to coordinate and push the U.S. government to take action, as well as coordinating with the business sectors of U.S. allies. Above all, Lundsager emphasized, “we just can’t assume, as we’ve all learned, that China is going to become more like us.”

Lundsager predicted that “we’re going to have a state-run, state-controlled economy [in China] for some time to come,” because President Xi’s power in China depends on it.

Echoing these sentiments, Kasoff was cautious in his assessment of U.S.-China relations moving forward. “Any deal that we get will not be the end of the process, but more like a temporary truce in what is increasingly looking like a much bigger struggle,” he explained.

"We’re likely to have a short-term agreement, but we’re really in for some rocky times, so buckle up."

“What I’m worried about,” Lundsager continued, “is both leaders have really gone way out on a limb in terms of insisting on getting A, B, C, D, and I feel that it may be too much that we’re asking of each other.”

Both Lundsager and Kasoff are optimistic that there is bipartisan support in Congress to take action against China. At the same time, they do not expect U.S.-China relations to smooth out in the near future, regardless of how these trade negotiations turn out.

“We’re likely to have a short-term agreement,” Kasoff conceded, “but we’re really in for some rocky times, so buckle up.”