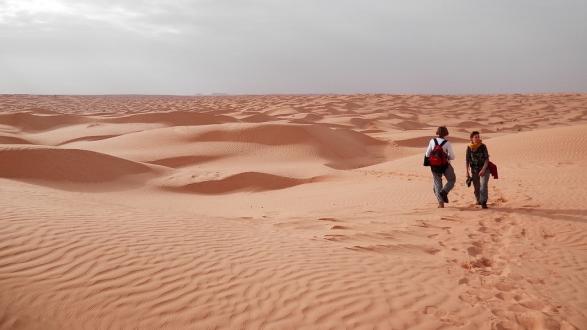 Since 1975, Morocco and the partially recognized Saharan Arab Democratic Republic (SADR) have disputed the Western Sahara territory. Despite the United Nations’ efforts, a UN peacekeeping mission in Western Sahara is now 27 years overdue in its commitment to organize a referendum on the territory’s status, and UN-mediated talks have done little to move the needle of progress. National Security Advisor John Bolton, who helped draft the 1991 UN peace agreement between Morocco and SADR as a State Department official, has recently put a spotlight on the issue, singling out Western Sahara as proof of the United Nation's ineffectiveness.

Why has a sparsely-populated desert region remained the object of one of Africa's oldest conflicts? Why has the United Nations been unable to organize a referendum after all these years? And will the Trump administration's outspokenness help push the conflict to a resolution?

Sarah Yerkes' research focuses on Tunisia’s political, economic, and security developments as well as state-society relations in the Middle East and North Africa. She has been a visiting fellow at the Brookings Institution and a Council on Foreign Relations international affairs fellow and has taught in the Security Studies Program at Georgetown University and at the Elliott School of International Affairs at the George Washington University. Read more.

Mieczysław Boduszyński teaches U.S. Foreign Policy at Pomona College, and was a diplomat with the U.S. Department of State at postings in Albania, Kosovo, Japan, Egypt, Libya and Iraq. A member of the Pacific Council, Boduszynski is an expert on the Balkans and the modern Middle East and North Africa, especially Iraq, Libya and Egypt. Read more.

THE NEED FOR BALANCE: COOPERATION, COMPETITION, AND THE U.S.-CHINA RELATIONSHIP
ISRAEL, THE GULF STATES, AND NORMALIZATION, WITH DR. JERROLD GREEN
LEADING THE FIGHT: HOW CITIES ARE ACTING ON GLOBAL ISSUES