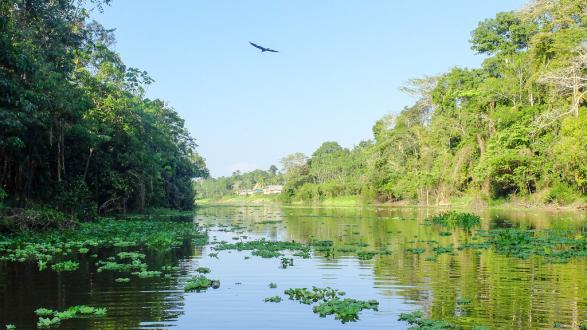 The sixth and final installment in the 2019 Summer Teleconference Series on territorial disputes, featuring the Amazon rainforest.

The Amazon is earth’s largest remaining tropical rainforest and home to at least 10 percent of the world’s known biodiversity. This rainforest is also home to roughly 400 indigenous tribes spread across six countries including Brazil, Peru, and Colombia. Farmers, landowners, developers, and even governments have often been at odds with these indigenous groups, as well as scientists and environmentalists, over the Amazon’s protected areas. Brazilian President Jair Bolsonaro has praised and promoted further development of the Amazon. Meanwhile, in July 2019, the Waorani tribe won a historic appeal in an Ecuadorian court to prevent the government from selling Amazon land to oil companies.

What are the political, economic, and environmental stakes of the Amazon’s continued deforestation? What groups have been the winners and losers of territorial disputes over the Amazon, and is that power dynamic set to change in the future?

Professor Hecht is a specialist on tropical development in Latin America, especially the Amazon Basin and Central America. As one of the founders of the analytic approach known as Political Ecology, Dr. Hecht has been engaged in understanding the theoretical and institutional dynamics that underpin deforestation and its alternatives. She is currently completing a book on Globalization and Amazonia. Read more.

Dr. Lovejoy is an ecologist who has worked in the Brazilian Amazon since 1965. In 1980, he published the first estimate of global extinction rates (in the Global 2000 Report to the President) and also coined the term “Biological diversity”. In the past, he served as the Chief Biodiversity Advisor to the World Bank and as Executive Vice President of World Wildlife Fund-US. In 2012, he received the Blue Planet Prize, and he has served on advisory councils in the Reagan, George H.W. Bush, and Clinton administrations. Read more.

Mark Cappellano is a longtime conservationist and Vice President of the Skyscrape Foundation – a Family Foundation funding environmental, fine art and humanitarian projects. Mark is a Director Emeritus of Earthwatch Institute and a Founding Board member of 5gyres and CARN (Conservation Action Research Network):  all of which address the global complexity of ecosystem services and climate change in an increasingly populated world. Read more.

The Road Ahead for the United States in 2020
Follow the Guns: Combating Rhino Poaching & Wildlife Crime
September "Heal the Bay" Beach Clean-Up