THE MILITARIZATION OF LAW ENFORCEMENT 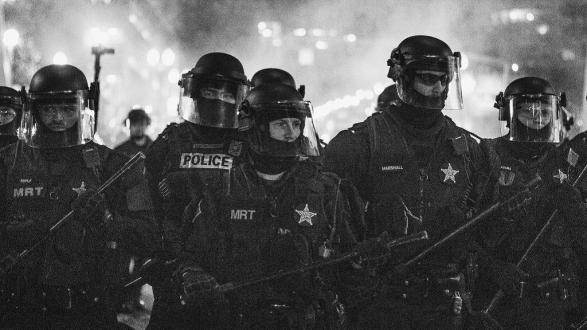 A Local-to-Global webcast on the national debate around law enforcement. Open to the public.

For decades, the United States has advocated for other countries to demilitarize its civilian police forces and made the case that it was an important step toward promoting safe and stable communities abroad. At the same time, here at home, American police forces grew the size and budgets of their paramilitary units (or SWAT teams). The lethality of these forces was augmented by the Department of Defense, which provided local law enforcement agencies with a dizzying array of military-grade hardware. As it stands, over $6 billion in military equipment has been distributed to local police departments, including MRAPS, Humvees, aircraft, night vision, and high powered rifles. What’s more, the adoption of military-style tactics and training by some police forces has further blurred the line between law enforcement and defense.

What impact has the increasing militarization of American policing had on public safety and public trust? What has driven this trend? How does it fit into our current national debate around law enforcement? And what can we learn from our own experiences abroad?

Mandy Smithberger rejoined POGO as the director of the Center for Defense Information in December 2014. Previously she was a national security policy adviser to U.S. Rep. Jackie Speier (D-Calif.) There, she worked on passing key provisions of the Military Whistleblower Protection Enhancement Act into law. Read more.

David Alan Sklansky teaches and writes about criminal law, criminal procedure, and evidence. Before joining the faculty of Stanford Law School in 2014, Sklansky taught at UC Berkeley and UCLA and served as an Assistant United States Attorney in Los Angeles. Read more.

Associate Justice Sanchez, who is joining the discussion in his personal capacity only, was appointed to the First District Court of Appeal in October 2018 by Governor Edmund G. Brown, Jr., and serves as an Associate Justice in Division One. Read more.

POLICYWEST 2020
UNDER PRESSURE: TAIWAN, THE UNITED STATES, AND CHINA
AFTER NOVEMBER 3: A PREDICTION