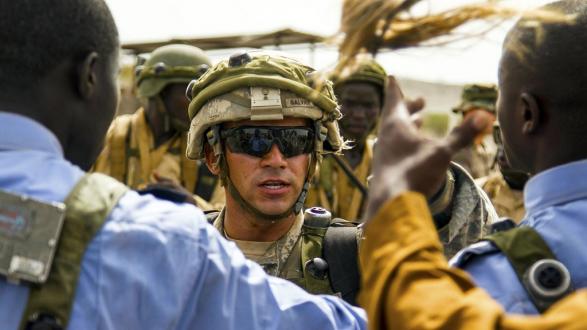 Read a summary of this teleconference here.

A Situation Briefing teleconference about the operations of the U.S. armed forces in Africa, in advance of Members Weekend 2017.

Plagued by countless complex security issues that many experts classify in the “gray zone” of conflict, USAFRICOM—and the many African governments it cooperates with—faces volatile and uncertain political environments that are caused by rampant religious, economic, and cultural conflict. U.S. military forces are currently conducting about 100 missions in Africa at any given time.

What is the U.S. military’s mission in Africa? With a proposed decrease in foreign aid and increase in defense spending, will the military’s presence in Africa continue to grow?

Grant Harris is a Pacific Council member and CEO of Harris Africa Partners LLC. He advises companies and organizations on strategy, policy, and mitigating risk with respect to doing business in Africa. He previously served as Special Assistant to the President and Senior Director for African Affairs at the White House from 2011 to 2015. Read more.

Ahead of this teleconference, read Grant Harris' report, "Why Africa Matters to U.S. National Security."

Amanda Dory previously served as the Deputy Assistant Secretary of Defense for Strategy in the Office of the Secretary of Defense from 2008-2011, where she was responsible for strategy articulation, development of force planning scenarios, policy planning, and analysis of long-term trends and the future security environment. Read more.

Dr. Becker is a faculty member in the School of International Relations at the University of Southern California (SIR) and the founder and director of the SIR Undergraduate Research Program. Read more.