Escalation of the Conflict in Syria 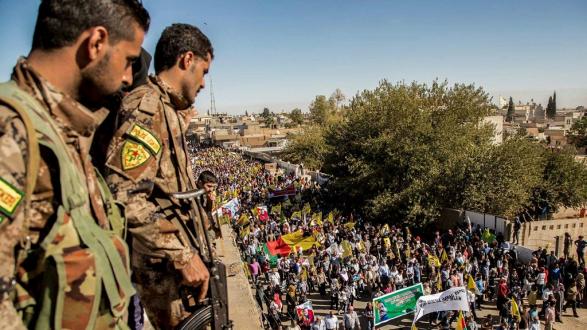 A teleconference on the unfolding situation in Syria.

On October 6, President Trump announced he was withdrawing U.S. troops from northern Syria, allowing Turkey to launch an offensive against the Kurds, a long-time U.S. ally. The move received bipartisan backlash in Washington. On October 13, in the face of an attack from Turkey, which considers the Kurds terrorists, the Kurds switched sides to the Syrian government. Both sides, Turkey and the Syrian government, are supported by Russia.

Given Turkey’s recent offensive and the U.S. withdrawal of troops from the region, what do these rapid changes mean for Kurdish forces and the continuation of conflict in Syria?

Dr. Barkey is an adjunct senior fellow for Middle East studies at the Council on Foreign Relations and the Bernard L. and Bertha F. Cohen Chair in International Relations at Lehigh University. At CFR, he works on the strategic future of the Kurds in the Middle East. Previously he was the Director of the Middle East Center at the Woodrow Wilson Center for International Scholars (2015-2017). Read more.

Linda Robinson is a senior researcher at the RAND Corporation and award-winning book author. Her recent research addresses political warfare by non-state actors, ISIS, and special operations forces. She has conducted extensive field work in the Middle East, South Asia, the Philippines and Latin America and testified before the U.S. Congress. She received a RAND Gold Medal for Making Victory Count After Defeating ISIS: Stabilization Challenges in Mosul and Beyond. Read more.

Peter Theroux is a a translator and author, having produced about 15 books, mostly literary translations from Arabic. He has served as a political officer and translator in Iraq, Yemen, and Afghanistan; under Richard Haass on the State Department's Policy Planning Staff, at the White House as Director of Persian Gulf Affairs on the National Security Council (2003-05), and the New York's Joint Terrorism Task Force (2008-10). Prior to his government service, he worked for the National Geographic Society, doing fieldwork in Egypt, Lebanon, and Syria. Read more.