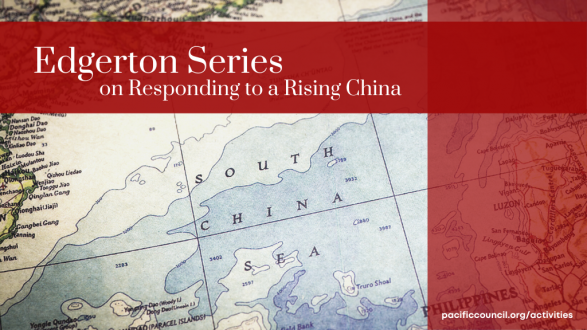 Featuring Rear Admiral Stephen Koehler of the U.S. Pacific Fleet, the second-highest-ranking U.S. military official in the Pacific, in the sixth installment of the Edgerton Series on Responding to a Rising China, on the impact shifting U.S. policy will have on the South China Sea. Open to the public.

No longer is the United States officially neutral on the issue of the South China Sea. July saw a raft of statements from the United States rejecting China’s “historical rights” claim to the region and reaffirming The Hague’s 2016 tribunal ruling in favor of the Philippines. Southeast Asian nations, many of which similarly stake dubious claims to the region, have quietly welcomed the official change in policy. Though they also worry about the instability threatened by an increasingly tense U.S.-China relationship. Please join us for the sixth installment of the Edgerton Series on Responding to a Rising China, where we will explore the impact shifting U.S. policy will have on South China Sea claimant nations as well as China’s approach to the resource-rich region.

*Members of the public may register here.*

Bonnie S. Glaser is a senior adviser for Asia and the director of the China Power Project as CSIS, where she works on issues related to Asia-Pacific security with a focus on Chinese foreign and security policy. She is concomitantly a nonresident fellow with the Lowy Institute in Sydney, Australia, and a senior associate with the Pacific Forum. Read more.

Alexandre Moore researches and monitors shifts in foreign policy, oversees the logistical and operational elements of events and recruits U.S. and foreign diplomats, military officials, and experts to meet with the Council. Read more.

WORLD IN DANGER WITH AMBASSADOR WOLFGANG ISCHINGER
THE UNITED STATES AND THE FUTURE OF 5G WITH FCC CHAIR AJIT PAI
POLICYWEST 2020: GEN. LORI ROBINSON ON U.S. NATIONAL SECURITY PRIORITIES IN 2021