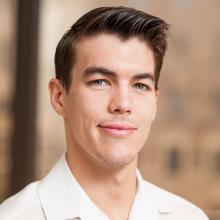 Alexandre Moore was the Senior Events Officer at the Pacific Council on International Policy, where he researched and monitored shifts in foreign policy, oversaw the logistical and operational elements of events, and recruited U.S. & foreign diplomats, military officials, and experts to meet with the Council. He previously worked as a Legal Assistant for the Law Offices of David Lee Moore and as a Finance & Administrative Assistant to Eloise Reyes for Congress in California's 31st congressional district. Alex interned at the U.S. Embassy in Beijing, China where he assisted the Embassy's public affairs officers facilitate cultural and educational exchanges between China and the United States. While in Beijing, he won recognition as PKU TV’s “Best New Actor” and was one a handful of U.S. students selected to meet with China’s 18th National Congress of the Communist Party to discuss China’s future 10 years. Alex graduated from the University of California Riverside Cum Laude, where he received a B.A. in Global Studies and a B.A. Political Science & Administrative Studies. Having been born and raised in Ojai, Alex is a California native.