BEYOND THE HORIZON: PERFORMANCE BY CONCERT PIANIST LLEWELLYN SANCHEZ-WERNER 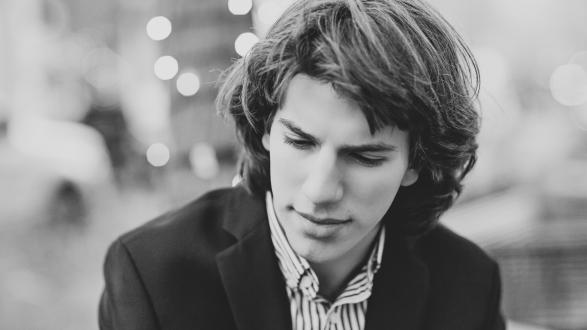 A keynote performance by internationally performing concert pianist and Gilmore Young Artist Award winner Llewellyn Sanchez-Werner. From the San Francisco Chronicle: “a gifted virtuoso...brought out transparency and emotional intensity with tender aplomb. Finger-busting writing seemed not to daunt him in the slightest.”

“Poetic, electrifying” (Michigan Live), “a gifted virtuoso” (San Francisco Chronicle), “masterful technique and a veritable deluge of sonorities” (La Presse Montreal), and “mesmerizing artistry and extraordinary ability to communicate” (The Post-Standard), describe 23-year-old Llewellyn Sanchez-Werner for performances that have stirred the intellect and humanity of his audiences on five continents. Selected a Gilmore Young Artist, an honor awarded every two years highlighting the most promising American pianists of the new generation, it also held deep meaning for him to perform at the White House, and at the Kennedy Center for President Obama’s second Inauguration concert. Sanchez-Werner’s multi-faceted artistry has been featured on NPR, CNN International, the Wall Street Journal, and WDR-Arte. He received the Atlantic Council Young Global Citizen Award recognizing his dedication to social action through music in such countries as Iraq, Rwanda, France, Canada, and the United States. General Petraeus commended his “courageous humanitarian contributions through the arts…strengthening the ties that unite our nations.”  His recent international performances include The Royal Concertgebouw in Amsterdam, CultureSummit in Abu Dhabi, the Louvre and Grenoble Museums in France, Smetana Hall in the Czech Republic, State Philharmonic Hall in Slovakia, Ashford Castle in Ireland, Gijon International Piano Festival in Spain, and Verbier Festival in Switzerland. Sanchez-Werner holds Master and Bachelor of Music degrees from Juilliard where he was awarded the Kovner Fellowship. Principal teachers have included Ilya Itin, Yoheved Kaplinsky, and composition with Lowell Liebermann. Sanchez-Werner studied with Boris Berman at the Yale School of Music, where he was awarded the Charles S. Miller Prize in their prestigious Artist Diploma program. Read more.